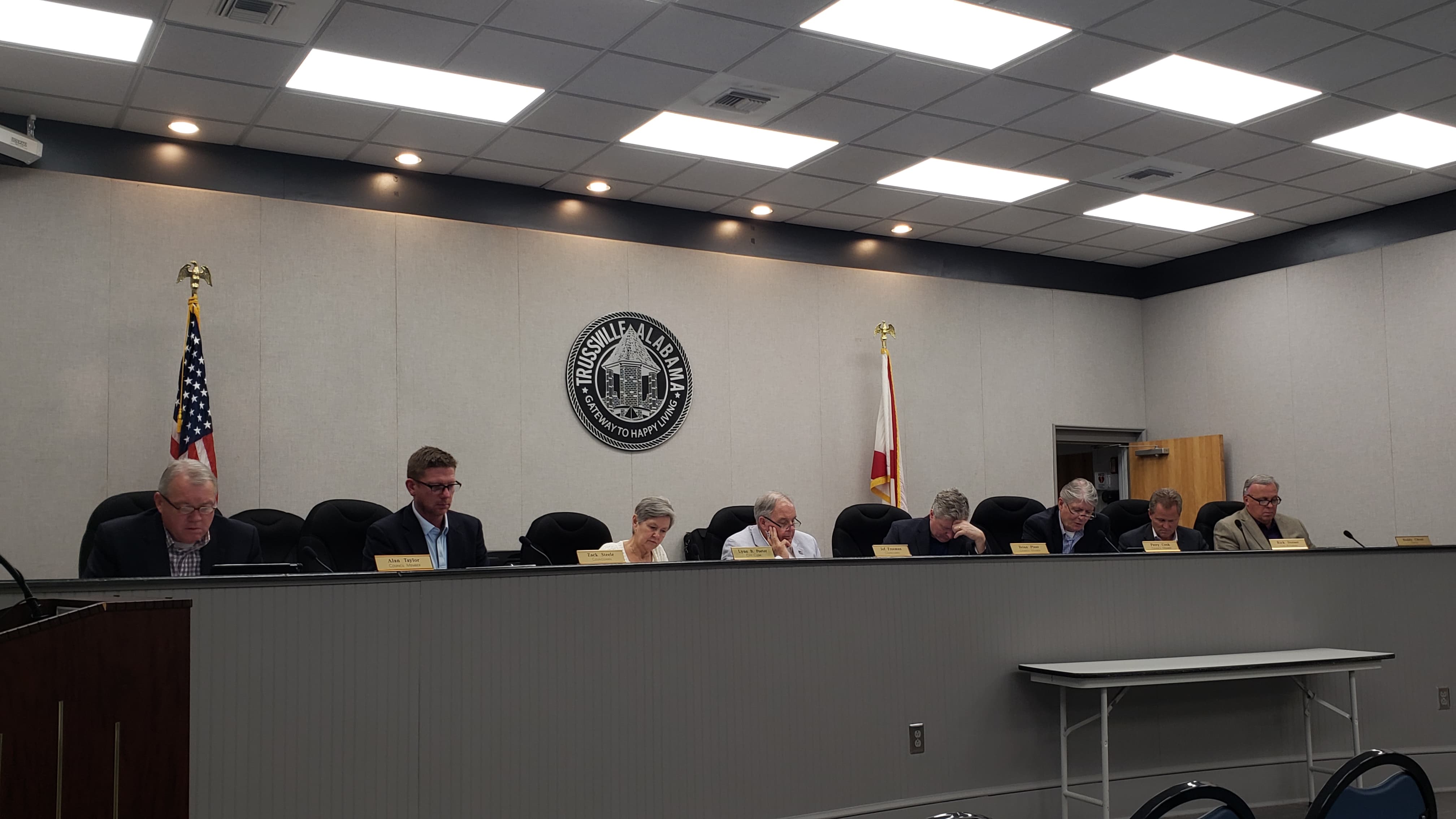 TRUSSVILLE — The Trussville City Council, on Thursday, Jan. 9, 2020, tabled a vote on the approval of a Memorandum of Understanding (MOU) between the city’s police department and its student resource officers (SROs), and Trussville City Schools, after Police Chief Eric Rush noticed language on the agreement was changed after his approval.

The purpose of the MOU is to clarify the specific responsibilities of school employees and SROs. The seven-page document was approved by the TCS Board of Education on Monday, Dec. 16, 2019. The approval came after months of discussions between city and BOE attorneys, Mayor Buddy Choat, Police Chief Rush and Superintendent Dr. Pattie Neill.

The BOE first publicly discussed the MOU during a work session for its November 2019 meeting. At that time, the members of the board were given a copy of the MOU for a first reading. The document was not made public, despite requests from The Trussville Tribune. In its December meeting, the measure was approved as part of the consent agenda.

For its first gathering of the new year, the Trussville City Council held a work session to discuss items to be voted on during its Jan. 14 council meeting. One of those items was the MOU between the city and the school system. The city must approve the agreement before it is made final.

As council members and Trussville Police Chief Eric Rush discussed the measure, Councilmember Zack Steele spoke up about a particular part of the agreement. In section I-A(3), the agreement stated:

TCS and TPD shall consult and agree to determine if it is appropriate to share information with the school community/media outlets and the appropriate timeline for doing so. If local media outlets call TCS or TPD before the two parties have consulted and agreed, no comments will be made.

Councilman Steele read the excerpt and asked if there were concerns about the wording. At that time, Chief Rush spoke up.

“That was changed,” said Rush. “That wasn’t worded that way, initially.”

Rush said he never agreed to withhold information from the public if and until he was able to get in contact with TCS. The version he read stated:

TCS and TPD shall consult and agree to determine when/if it is appropriate to share information with the school community/media outlets and the appropriate timeline for doing so.

“So, we’ve got a document that you have not approved?” asked Freeman.

Rush assured the council he was not given that version of the MOU. Furthermore, he said he had an issue with the new wording and would like to make changes.

“I’m supposed to talk to the school system and get them to approve something that’s a criminal matter?” Rush asked. He then asked for a copy of the TCS approved document.

“This is my concern,” Freeman continued. “As a council member, I was depending on the draft being reviewed by the chief and the mayor and everybody being in agreement. That’s what I was being told and now I’m hearing there’s a provision that’s in the agreement that the chief did not see in the draft.”

Part of negotiations on the MOU was sending drafts back and forth. At some point in those discussions, Chief Rush said he stopped getting drafts. When that happened is not clear but according to Dr. Neill, the MOU was not changed after the school board approved it.

“The draft MOU presented and discussed at the November work session was the same document approved by the TCS board in December,” stated Neill.

Mayor Choat said he felt there should be some type of communication before any information is released to the public, in order to assure correct information is given. While he agreed, Councilman Brian Plant said the way the part of the agreement is worded is not.

“I don’t think it is fine because they [police and schools] overlap,” Plant explained. “The educational regulations and public safety concerns are two different animals.”

Upon review of student resource officer MOUs from multiple school systems, nationally and locally, it was discovered that language addressing the media and public information was not included. No other MOU reviewed had language requiring police to confer with the school system on how and when to report incidents, including MOUs from Mountain Brook, Vestavia Hills and Hoover City Schools.

Councilman Alan Taylor, who joined city and school leaders for a school safety meeting, said it was agreed upon that the school would follow educational regulations and the police department would follow public safety regulations in any event.

“That last sentence that says ‘we’ve got to agree or we don’t make any comment,’ I don’t think that should be in there,” Taylor said.

Councilman Steele said more work needs to be done on the language of the contract. Several council members expressed concerns about the word “shall” being a legally-binding word. They would like the word taken out of the draft.

Choat, Rush, the school system and attorneys will go back to the draft and make the necessary changes. The school board will then be required to once more approve the draft before it is sent back to the Trussville City Council for final approval.

The Trussville City Council will meet Tuesday, Jan. 14, at 6 p.m. for its regular meeting at City Hall.