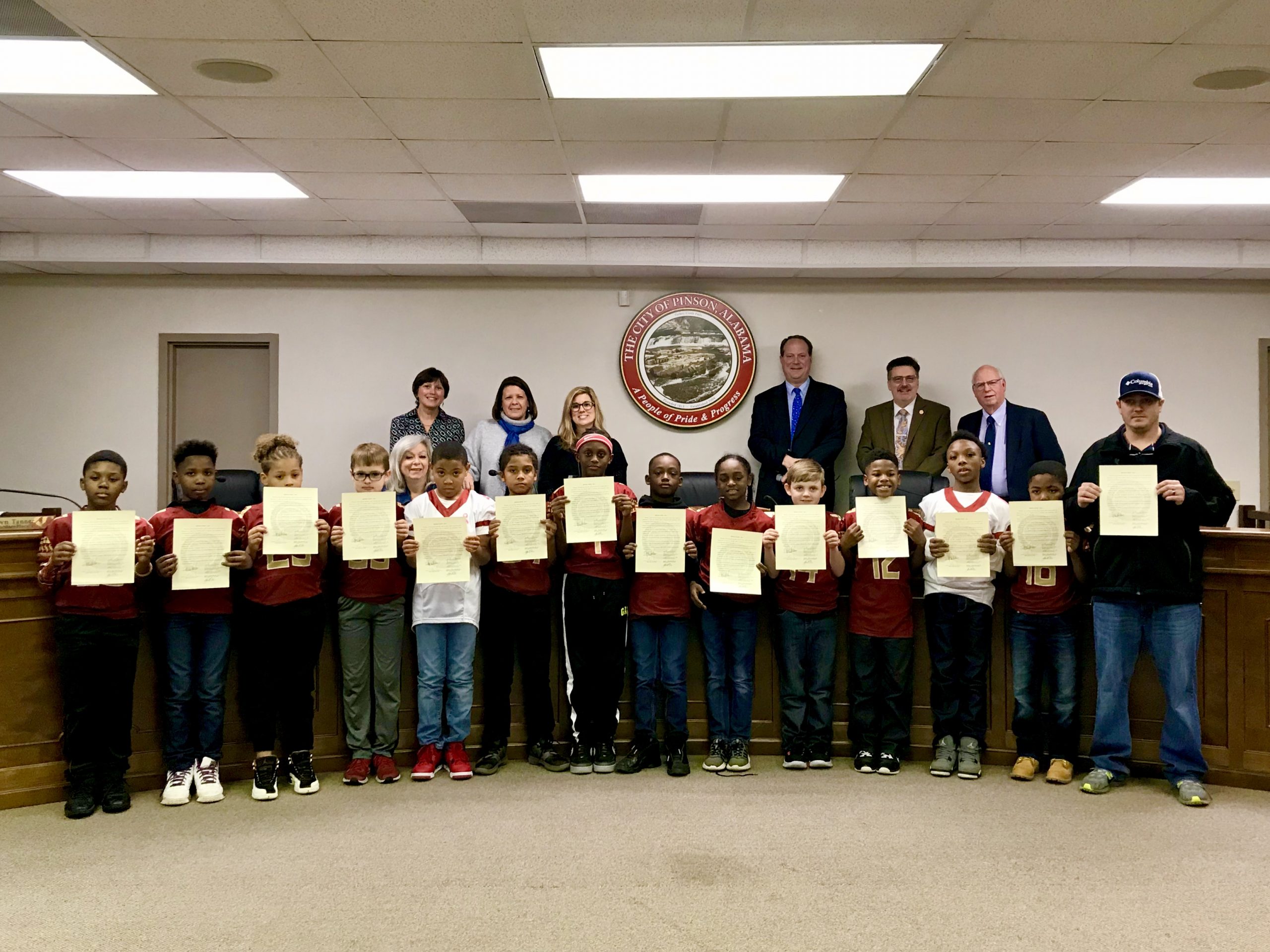 Mayor Hoyt Sanders and the Pinson City Council honored the Pinson Youth Sports 10U Football team Thursday night with a resolution recognizing them for their outstanding work and dedication to the 2019 season.

According to Resolution 20-4, “the 2019 Pinson Youth Sports 10U Football Team had an exceptional season, receiving 2nd Place in the United Youth Football League of Alabama, and … this team represented Pinson Parks and Recreation, the City of Pinson, and all of Jefferson County with superior skills and in a sportsmanlike manner.” 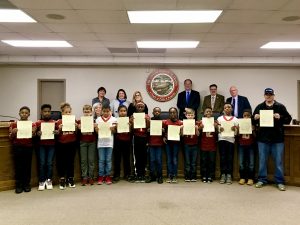 The athletes were each presented with their own copy of Resolution 20-4, which was unanimously approved by the council.

“I just want to thank Coach Jeremy for what he’s done for these boys and this team, and just for our program as a whole,” said Pinson Parks and Recreation Director Matthew Nixon. “Tonight is about these boys and these coaches. We’re very proud of them, and we continue to see growth. These are going to be some good young men coming up through the Pinson system as they get older.”

Nixon then introduced Parks and Recreation board member and football liaison, Chris Ousley.

“I’ve seen these kids out there – most of them have been out there with Coach Jeremy (Evans) since they were five and six,” Ousley said. “They continually grow, they continually achieve this. This is the second year in a row that they have made it all the way and come up just short. They just get better every year.”

“I’d like to thank my coaches and the parents first,” Evans said. “Without them, we wouldn’t be where we’re at today. Last year, we were sitting right here, we promised to get the championship, but we were just a little bit short. So hopefully next year we can bring the championship home.

“These guys played hard all season. We were 10-2 on the season, so we had a great season. I’m just happy and I hope next year we’re standing up here with a bigger trophy.”

Additionally, the city council received a report on future upgrades to the Pinson Youth Sports Complex from Erik Hendon, of Hendon & Huckestein Architects. Hendon was the architect who worked on the recent transformation of the Rock School Center, which included making it the new home of the Pinson Public Library.

“I gave Erik our ADA list at the ballpark, as well as our long-term goals, football park and everything that had been fed to me,” Mayor Hoyt Sanders said.

Sanders asked Hendon to update the council on how the city could move forward and improve the ballpark.

Hendon said that he did a site visit around seven or eight months ago, where he walked around the park to get an idea of some of the specific improvements that are needed.

“It’s not just the ADA,” he said. “There are other parking improvements that are needed. There’s some drainage issues with a couple of the fields that are on the upper end. So I had looked at some high level, preliminary, what we could do out there.

“There was also a discussion, if I understand correctly, about conceptual master planning for a future, multi-purpose gymnasium type of a facility that could be planned for without impacting both the current, as well as the future, use of the park.”

Hendon said that, as a somewhat related issue, he had also discussed with the mayor recommendations for energy efficiency improvements for the windows at Palmerdale Homestead Community Center. Removing the original windows of the historic building will not be an option; instead, based on the preliminary analysis, Hendon said it looks like they would place additional insulated glass in the windows, creating double-pane windows.

“Big picture from a timing standpoint, I have understood that planning would ideally occur during 2020, and so had anticipated using the first five or six months of this year to do some conceptual planning,” Henson said. “We’ve come up with an estimate of a not-to-exceed cost of $10,000 to do the various studies. So use the first six months to do the conceptual planning and figure out the scope of work, and then use the last part of the year to develop the details of construction documents that we would be in a position to put out for bid this time next year in 2021, for the improvements.”

Councilor Dawn Tanner offered a motion to authorize Hendon to proceed with the necessary studies, not to exceed $10,000. The motion passed unanimously.

In other city news, the council approved Resolution 20-5, which is a resolution authorizing the mayor to execute an amended contract for the purchase of real estate property adjacent to Bradford Park. Councilor Robbie Roberts abstained from voting due to the fact that he and the seller of the property, David D. Nichols, serve on a nonprofit committee together.

“We passed a contract back in August to buy a piece of property that’s adjacent to the Bradford Park that we’re leasing from Jefferson County Commission,” Mayor Sanders said. “We discovered a subdivision flaw in another part of that property that has got to be corrected for us to be able to subdivide our piece off. The contract primarily just provides that the original contract is extended and … says that we can close within 90 days after the subdivision is corrected.”

The council also unanimously approved Ordinance 2020-3, which authorized the annexation of residential property at 5420 Saddle Ridge Lane into the Pinson city limits.

The next meeting of the Pinson City Council will be Thursday, Feb. 6, 2020, at Pinson City Hall. Pre-council begins at 6:30 p.m. and the regular council meeting begins at 7 p.m.