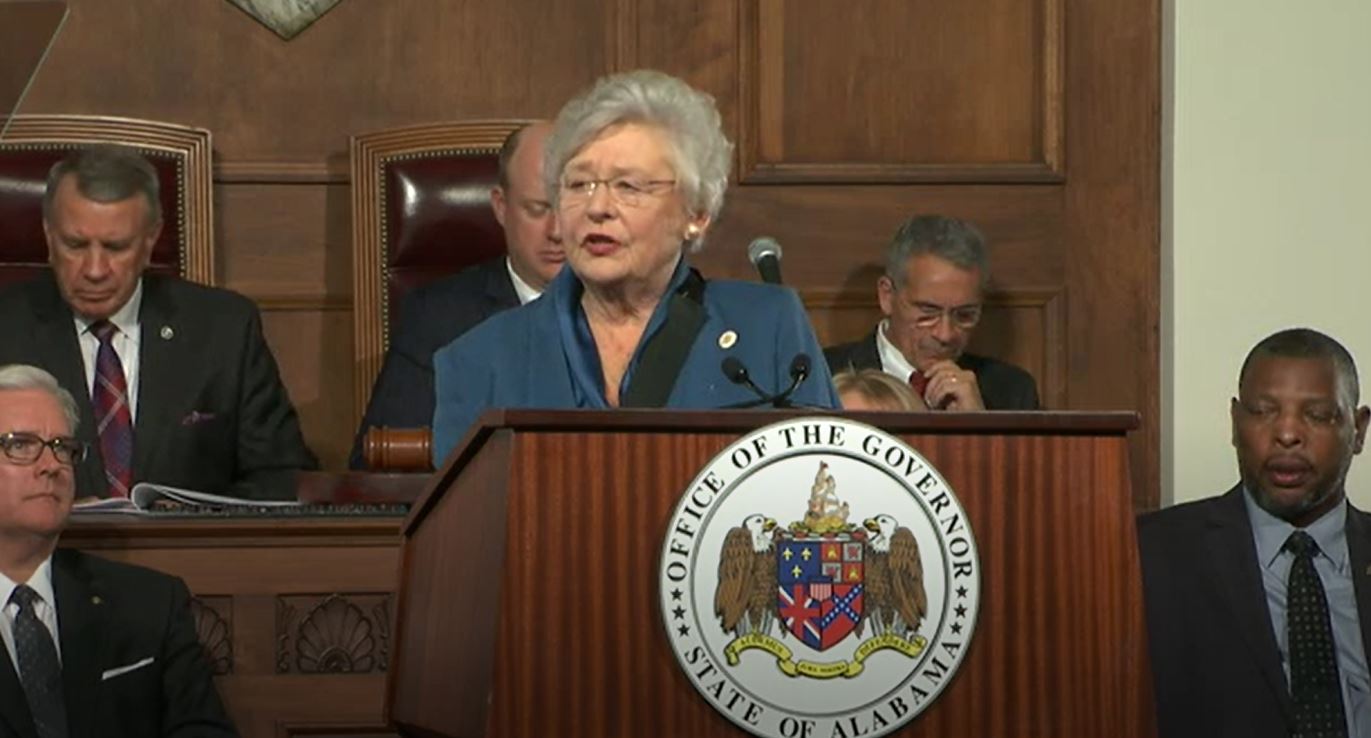 MONTGOMERY — As Governor Kay Ivey gave her annual State of the State address on Tuesday, Feb. 4, she reminded Alabama she is one tough cookie.

“As you can see, I’m working with one arm – not tied behind my back — just tied up,” said Ivey. “But, as I always say, there’s no step too high for a high stepper! I’ll be fine.”

Governor Ivey said she was happy to address the citizens of “Sweet Home Alabama.”

Ivey touched on the state’s recent bicentennial celebrations and she talked about the 2020 legislative session.

“We can be confident with our plans to build on our past as we step boldly into a new century for our great state,” she said. “Our third century begins with a strong, robust economy and a renewed commitment to look for new opportunities to answer old challenges, many of which have been around for decades.”

Throughout challenges, Ivey said bipartisan issues have been solved with bipartisan solutions.

“Success breeds success,” said Ivey. “And there is no better time to think big – and be bold – than now! Our future generations depend on us to do so.”

The governor said the project Rebuild Alabama is a prime example of how all parties came together to be productive.

“And as I promised the people of Alabama on the day I signed this bill into law, Rebuild Alabama will only be spent on building roads and bridges,” Ivey explained. “And, in fact, we added strong accountability measures to make certain of this.”

Ivey said one of her top priorities for the current session is human rights concerning the criminal justice system. She said failure is not an option.

“Thanks to the support of the Alabama Legislature, we made good progress during the last session to address the issue of understaffing,” she said. “I’m pleased to report that our recruiting and retention efforts are improving and moving in the right direction…

“Ladies and gentlemen, Alabama has no choice but to reinvent our corrections system by replacing outdated and unsafe facilities that pose a great risk to public safety – and inhibit development of programs for inmate rehabilitation,” she continued.

Ivey said she would work with other state leaders to aid with reentry, education and workforce training, for those formerly incarcerated. Ivey used a former prison inmate named Brandie McCain as an example of how programs are working in the state. McCain has been successful in the workforce and is now giving back by looking to hire other qualified Ingram State graduates.

In her State of the State speech, Governor Ivey also addressed issues concerning education in Alabama.

Ivey said Amendment One, which will be on the March 3 primary ballot, would create term limits for the State Board and no member will serve more than two six-year terms, thus bringing fresh new ideas to the commission every few years.

“Equally important, the newly constituted board will reflect the racial, gender and geographic diversity to reflect the make-up of students in our public school system,” she said. “There’s no other way to say it but our current system isn’t working.”

Ivey will propose an additional $25 million to expand the state’s pre-k program. The money will help create an additional 193 classrooms. She will also propose a 3% raise for educators K-community college and a $1 billion public school and college authority for K-12 education, as well as for two and four-year colleges and universities.

“This money will be distributed on a formula basis to allow for much-needed capital improvements across the state,” she explained. “Equally important, this bond will not include any legislative earmarks for pet projects.”

“She left a lasting impact on my life by creating within me a passion for reading,” Ivey said. “It was because of her that led me to believe that if a child can learn to read, they can learn to do anything.”

Ivey thanked all of the people in her administration. She went onto honor members of law enforcement who were killed in 2019.

“Seven members of the Alabama Law Enforcement community were killed in the line of duty,” said Ivey. “These heroes exhibited the best virtues of our state – they were selfless, brave, dedicated and, in the end, willing to sacrifice their lives for all of us.”

The widow of Lowndes County Sheriff “Big John” Williams was in attendance in Montgomery for the governor’s address. Ivey held a moment of silence to remember those killed.

Ivey said when it comes to public safety, the Alabama Law Enforcement Agency has increased patrols on roads and waterways.

“This has been a top focus of my administration and with your help, we have increased the number of Troopers from 365 to 435, a net increase of 19%,” Ivey said. “We have almost doubled our marine officers from 24 to 42! My budget will include additional funding to hire and train 50 additional sworn officers.”

Ivey emphasized the importance of the Census, access to broadband internet, health care, and mental health care. Ivey said these issues are ones her administration is working on daily.

When it comes to a state lottery, Ivey said it’s not that simple. She is forming a small group to work on gathering facts on how much money the state could gain with a lottery. Names of the distinguished citizens chosen to be in the group will be released in the coming days.

“Like you, I’m fully aware that the four states which border us all have some form of gaming,” said Ivey. “And neither you nor I are naïve enough to believe that we’re benefitting in any way when our people cross the state line to bet on a game of chance.”

Ivey said she believes the people of Alabama should have the choice to have a lottery or not.

In closing, Ivey made a promise to the people of Alabama.

“I promise you this,” she said. “I’m going to do all I can to help lead our state to solve tough problems and realize our untapped potential. Serving as your governor has been the utmost honor and privilege of my life. You see, I truly believe this is our moment, as we step confidently into our third century, to do the things that need to be done, for both today and in the years to come.”