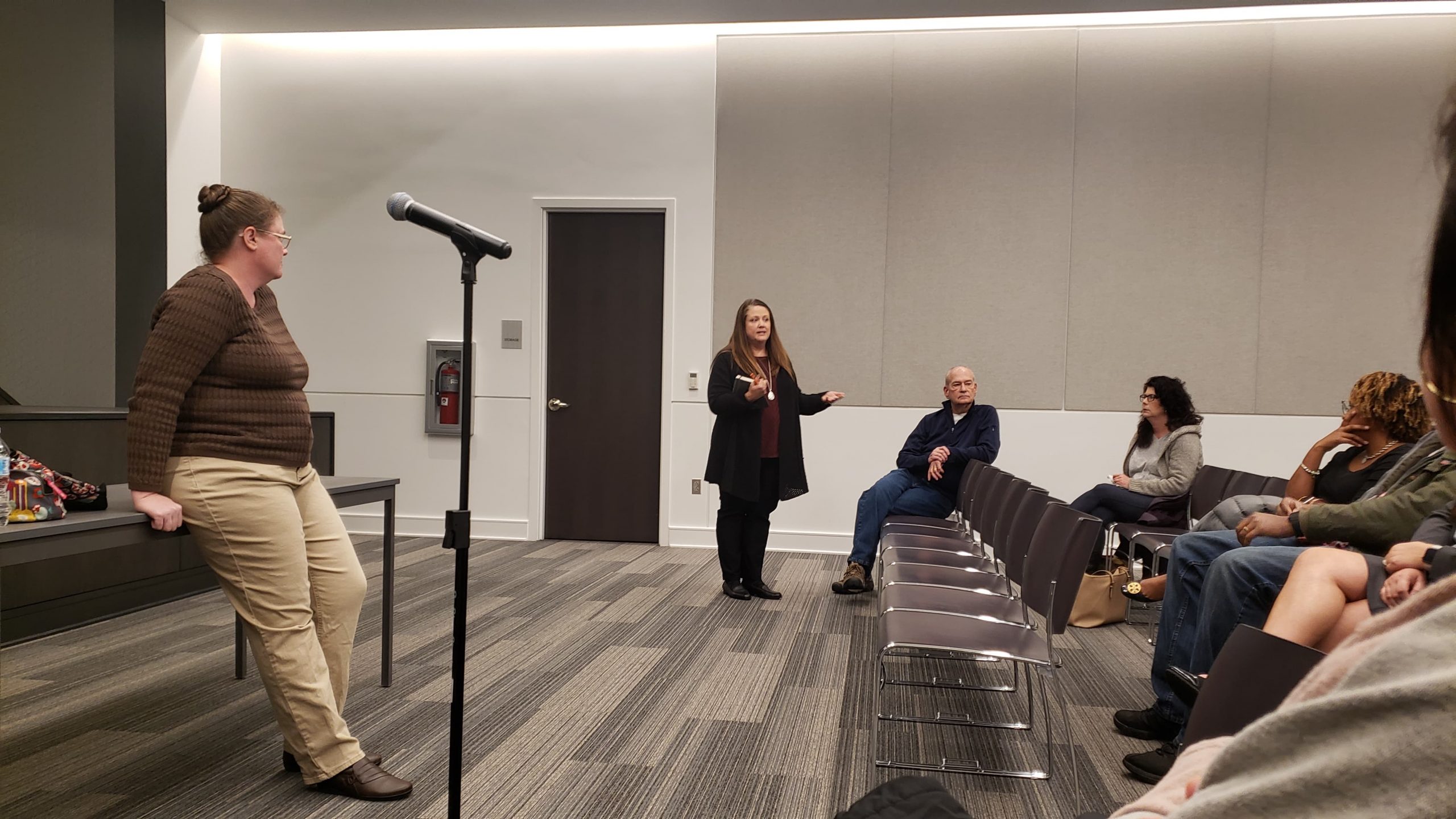 TRUSSVILLE — A group of concerned parents gathered at the Trussville Public Library on Thursday, Feb. 6, 2020, to discuss concerns about the YMCA replacing the Trussville City Schools summer program.

The YMCA program will be held at Paine Elementary School and will be open to rising first through sixth-graders in Trussville City Schools.

Elizabeth Walker, a mother of two, broke down her concerns in a letter to the Board of Education.

“I haven’t gotten a response, and I don’t know if I ever will, but I want to start by reading what I wrote to them,” said Walker.

The concerns included an increased cost of care, quality of care, facility wear and tear and facility costs. Walker said she is most concerned that the school system did not seek input from parents about the change.

“Surely, the school system could have worked with parents to find other ways to save and maybe even improve upon the TCS program,” said Walker.

YMCA Youth Development Director Rhonda Elmore said the decision to take on the TCS program came after discussions about the needs of each entity.

“Our interest is, we want to expand our reach,” said Elmore. “When we learned Trussville City Schools was interested in our program, we sat around a table and talked about what our program can do.”

“I don’t know who approached who, but the conversation started about a year ago,” said Pile. “It was a mutual conversation that occurred over a year’s time.”

Pile said he didn’t remember who exactly the YMCA spoke to in the beginning, but by fall 2019, they were talking to the Board of Education and Dr. Pattie Neill during a retreat.

The YMCA has already responded to some concerns from parents. When the news was first released, the plan was to have all area children come into Paine. It was to be open to all rising first through eighth-graders, despite their residence. Parents voiced concerns about having children from outside of Trussville coming into a tax-payer-purchased, city school building.

Elmore said then, swift changes were made to address those concerns.

“As for any changes, we’re here to support the Trussville City Schools with the type of programs they elect to move forward with after discussions with the parents,” Elmore said. “The YMCA, like TCS, wants the best for these students, and we look forward to working together with everyone to make that happen.”

Pile said he was at the library to answer questions from the parents in attendance because he wants parents to know he truly cares about the community.

“I want you to know that we have faces, we have personalities, we are human beings,” said Pile. “We are not trying to hide from anybody. We want to listen and we want to be part of this conversation.”

Pile and Elmore took turns answering questions from the crowd.

Some parents at the meeting were pleased with the YMCA taking over the program. They said the change will mean their children will be able to get into the program at Paine because before, there were only a set number of spots and it was difficult to get in if you didn’t apply early.

“I think it’s just the idea of something being new that may be concerning,” said LaShelle Barmore. “But when I tell you, the YMCA has been great to me. I feel like some of the issues that I have, in regards to timing to getting my kids signed up for after school and the summer program, those are not issues for us with the YMCA. It has been nothing but a beautiful experience.”

Barmore also responded when another parent made the following statement:

I think the Y is a great organization to go into cities that don’t have programs, that have kids that are in need, their parents are not educated, their kids are going to grow up just like their parents and the Y can come in and provide so many things for them, that no one else can provide for them. That’s a great thing for them. For us, we have a program that we know and love and so we have high expectations and if we go into it this summer, if we decide to sign our kids up and it is a bunch of Hellions running loose in there, then it is not going to be the place for us. So, I think what I want to say is we may have higher expectations for our childcare than what I have seen out of the Y in Trussville, in my experience.

“With all due respect, I have got to say this. Our kids were at daycare before we went onto Trussville at Heritage, but I think what bothers me about the concern is that the Trussville City School has not serviced my children in that perspective. They don’t have availability and I am a working momma, I have a very busy practice in Grandview. I can’t get over there to register and the Y has been that for us. It’s almost slightly offensive to hear you say that about Hellions because I feel like children are busy and I think when we are talking about after school and enrichment and summer programs, I would prefer that my child not be put in a space that is so controlled and not only controlled, but homogenist as well, and I do feel like my children who live in an upper-echelon community, have the responsibility of being a part of their entire community. It bothers me that I moved to Trussville specifically for the purpose of being able to see more than just people who look like me, or more than people who look like you, and I think the Y serves us that.”

Barmore said she doesn’t believe other parents have an accurate opinion of what happens at the Y.

“He did like a quieter environment,” said Mattox. “He loved his classmates and his friends that he knew.”

Mattox also said the YMCA not bussing students to Paine will be a challenge for her. She said she still has a lot to consider before making a decision on where to send her son. She said after the meeting she feels less secure about the Y program.

Mattox said she would have preferred someone from the school system being at the meeting Thursday.

There are 45 children enrolled for the YMCA program at Paine, so far. Elmore believes that number will grow. She said the Y is equipped to handle more students.

Elmore said junior counselors (ages 18 and younger) will be on staff to assist adult staff. She said age groups will be separated.

“They stay within their age group,” said Elmore. “The only type that they would all be together is if we have a morning assembly, but we still keep them separated at that time. They might be in the same space, but they’re not doing things together.”

Elmore clarified that all staff from the TCS program would have the opportunity to apply to work at the Y program.

“It is our desire to retain any staff that wants to continue working within the program,” said Elmore.

Walker said many children are comfortable with the TCS staff.

Pile said former TCS staff is a priority. He said he will be sure to have a conversation with those interested in continuing to work for the summer program. You can apply online from the YMCA’s website.

As part of the agreement between TCS and the YMCA, the YMCA must be able to provide records showing all YMCA employees working for the program passed criminal background checks. Employees over 19 must also pass the Alabama Department of Human Resources Child Abuse and Neglect Clearance.

Students in the program will have access to the amphitheater, outdoor green space, cafeteria, gymnasium, computer labs and classroom space at Paine Elementary School. The YMCA will not use the kitchen at Paine Elementary and all students must bring their own lunch.

Pile said the YMCA has insurance for the use of facilities.

The agreement can be viewed at the bottom of this article.

The cost of the YMCA program is more than the previous summer program with Trussville City Schools. Elmore said that’s because of the quality of programming being offered.

“We are investing a lot into our programming and the type of program that we do just costs a little bit more,” said Elmore. “We are also investing in our staff.”

The cost of the previous program offered by Trussville City Schools was $90 per week for one child and $70 per additional child. There was also a $45 registration fee.

The cost of the YMCA program is $135 per week, plus a $35 registration fee. Parents can choose which weeks their children will participate in the day camp. Elmore said there is assistance for those who cannot afford the program.

“We’re able to offer scholarships to families who qualify, so anyone who can’t afford the program can apply for scholarships,” said Elmore.

For Walker, the increase will mean $1,000 more for summer care.

“That’s a huge shock,” said Walker. “Not all of us would qualify for assistance, but we are still having to pay more because they have no second-child discount.”

The program follows a new camp-design, where the YMCA invests in resources on site. There will be no field trips, but various programs will be brought into Paine, including literacy enrichment and STEM projects.

Pile said all money made goes directly back into the program. In fact, he said it is possible the Trussville summer camp will cost the YMCA.

Pile confirmed the YMCA is in talks with TCS about also taking over the after-school program.

After school care would only be for Trussville City Schools students, although the Board of Education has not voted on making changes.

Walker said she would also like to see the school system answer questions about talks about the YMCA taking over the TCS After School Care program. She encouraged everyone in attendance to attend the next City Council meeting on Tuesday, Feb. 11 and the next Trussville City Schools Board of Education meeting, on Monday, Feb. 24.