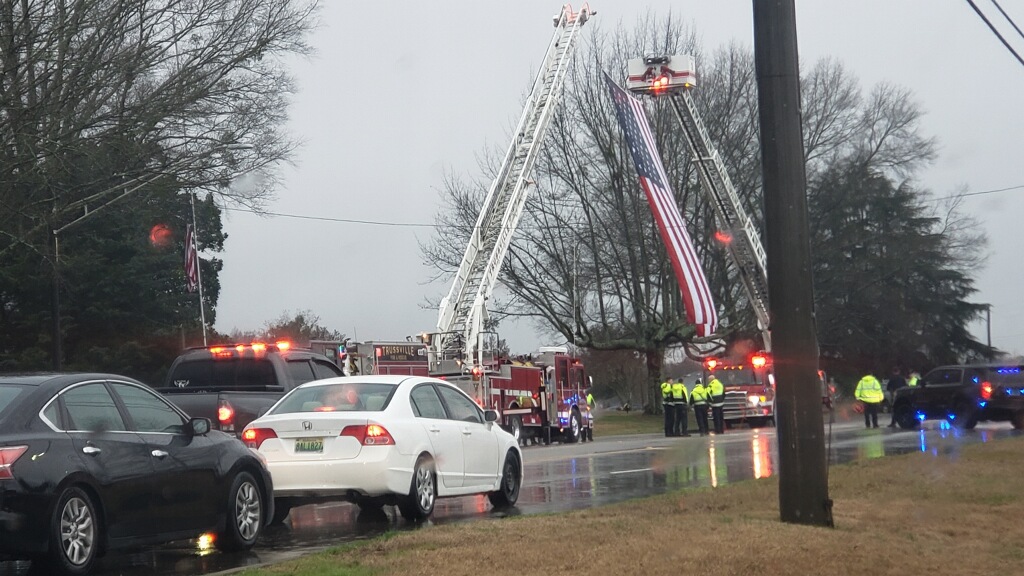 TRUSSVILLE — Highway 11 in Trussville was temporarly shut down on Monday as the body of Kimberly police officer Nick O’Rear was escorted to his final resting place at Jefferson Memorial Gardens.

Trussville Fire and Rescue used ladder trucks to hoist a large U.S. flag as the procession entered the cemetery. Dozens of police departments and fire departments were part of the convoy.

O’Rear was remembered earlier today at Gardendale First Baptist Church before family, friends and hundreds of law enforcement officers from all over the state and from throughout the country. 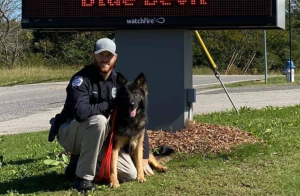 The graduate of St. Clair County High School was a father of two, with one child on the way. O’Rear had been with the Kimberly Police Department for approximately one year.

O’Rear was shot and killed this past Wednesday as he assisted the Warrior Police Department in attempting to stop a vehicle on I-65 in Warrior. The incident began at around 10 p.m. on Wednesday in the southbound lane of I-65 in Warrior. Reports indicate that Warrior police attempted to pull over a vehicle, which did not stop. An officer from the Kimberly Police Department joined the chase. The officer proceeded to pull in front of the suspect’s vehicle, which opened fire into the police cruiser.

O’Rear was struck in the head while driving. He crashed his vehicle soon after. He was escorted to UAB Hospital by Warrior firefighters along with a large contingent of police officers.

The alleged shooter, Preston Chyenne Johnson, 37, faces charges of capital murder of a police officer. He and three others were taken into custody in Dora following a multi-agency manhunt.

“I am profoundly grieved to hear of the passing of the Kimberly Police Officer who was shot in the line of duty last night,” Alabama Gov. Kay Ivey said in a statement. “The safety of our citizens and the rule of law is forefront on the minds of our officers who willingly risk their lives on behalf of ours. His sacrifice will never be forgotten.”

According to his obituary, “O’Rear was always doing something. Not only did he serve as a police officer, he owned and operated Southern Lawn Care and Xtreme Pressure Washing LLC. He was a Ham Radio Operator. He was an ordained Minister and he married his sister Ashley and brother-in-law, Chad. Nick had so many accomplishments, when he put his mind to something, he did it. He always had a smile on his face, and it lit up a room. He never met a stranger. He had a big heart and he loved big. He was also quite the jokester, he always knew how to make you laugh.”