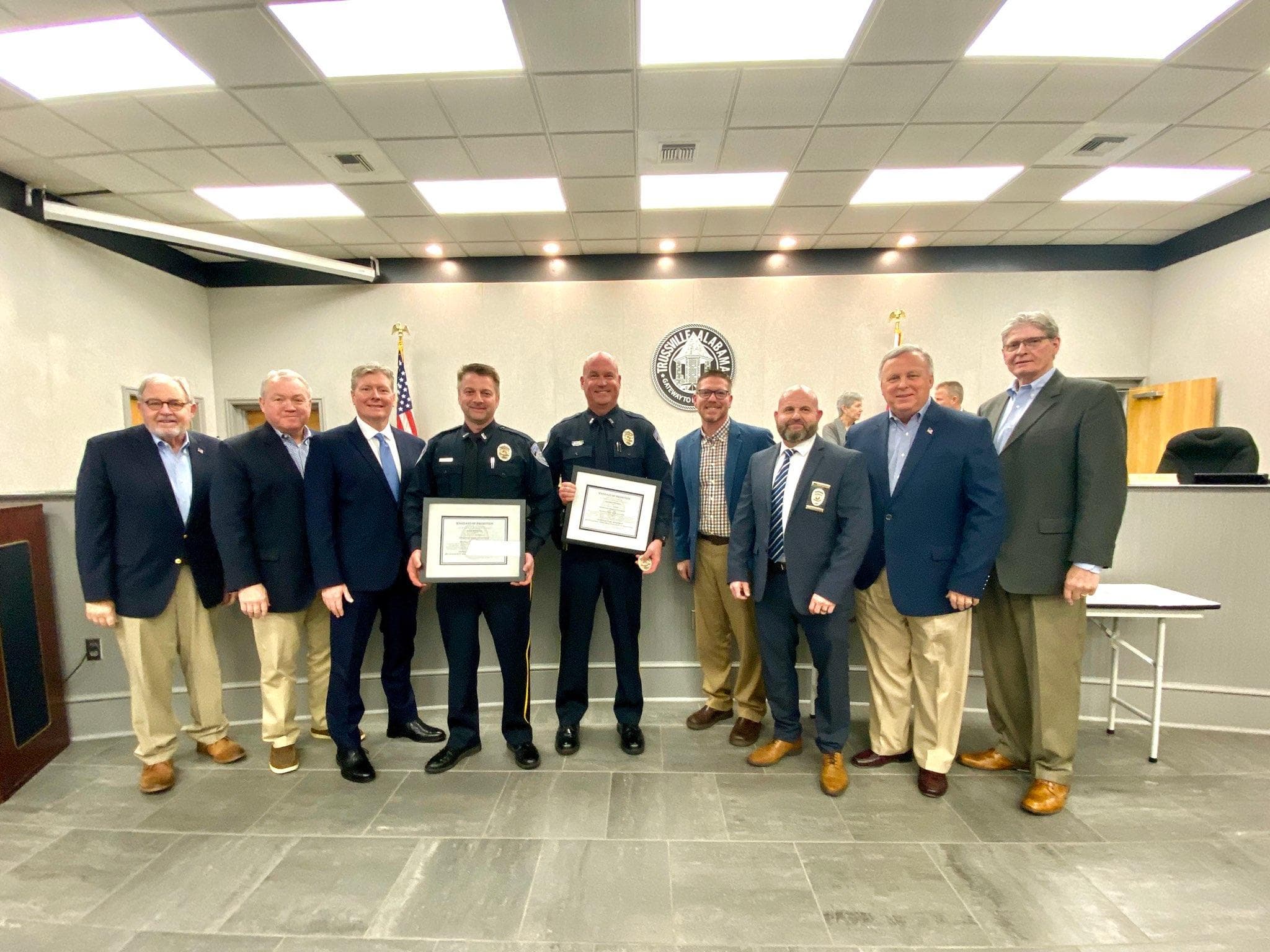 Boy Scout Troop 845 was in attendance and lead the crowd in the Pledge of Allegiance.

Chief Eric Rush promoted two officers to the rank of Captain. The police department hasn’t had a captain position in nearly two years, according to Rush. Dave Morette and Greg Cardwell were recognized and presented with certificates and new badges.

“As the chief, I have great expectations for these two and I’m confident they’re up to the task that I’ve given them,” said Rush.

Walker voiced her concerns during a parent meeting at the Trussville Public Library on Thursday, Feb. 6, 2020.

Other parents also spoke to the council saying they wish the school system would have communicated with parents ahead of making decisions.

Justin Rogers said his family moved to Trussville in 2006. He said the school system was a main reason for the move. His daughter, who is a student at Paine, enjoyed the TCS program and the caregivers working with the program.

After the public hearing section of the meeting, parents asked the council if there was a way to change the way Board of Education members are put into their positions. Some parents said without having an elected board, there is no accountability for members.

Mayor Buddy Choat said the city would have the opportunity to speak with the school board and ask them to respond to concerns of parents.

Councilmember Jef Freeman said for reasons concerning accreditation, the council has to be careful what they ask of the BOE.

Two parcels of property at 6987 and 6991 Gadsden Highway were rezoned from Industrial-1 to Commercial-2. The move was recommended by the city’s Planning and Zoning Committee.

1751 Gadsden Highway was also rezoned from Institutional-1 to Commercial-2. The move was recommended by the city’s Planning and Zoning Committee.

The south side of the 7500-7800 blocks of Bethune Parkway was also rezoned. The parcels, which were formerly zoned Residential-2, were rezoned to Qualified Residential Garden Homes. The property is part of the latest development in the Stockton subdivision.

Richard Johnson, who was at the meeting representing the Stockton development, said the rezoning would not extend Bethune Parkway.

Paul Bentley, the president of the Home Owner’s Association at Windsong, said his neighbors do not want garden homes next to their property. He is also concerned with the approval making it easier for future garden homes to be put in the area. Another concern he had was construction traffic.

Other concerns voiced during the public hearing portion for the resolution were issues with runoff during construction by Signature Homes.

The council also approved a resolution approving an election manager. Lynn Porter will take the position during the 2020 election cycle. Porter will be responsible for mayoral duties concerning the municipal election.

The council approved a resolution concerning handicap voting equipment. The city has to enact the resolution to allow it to use the machine that Jefferson County has approved for use.

The council approved a resolution authorizing Mayor Buddy Choat to execute documents for right-of-way acquisitions for the downtown Loop Road. Councilman Alan Taylor abstained from the vote because he works for the First Baptist Church of Trussville, which is involved in the acquisitions.

Measures approved as part of the consent agenda are listed below.