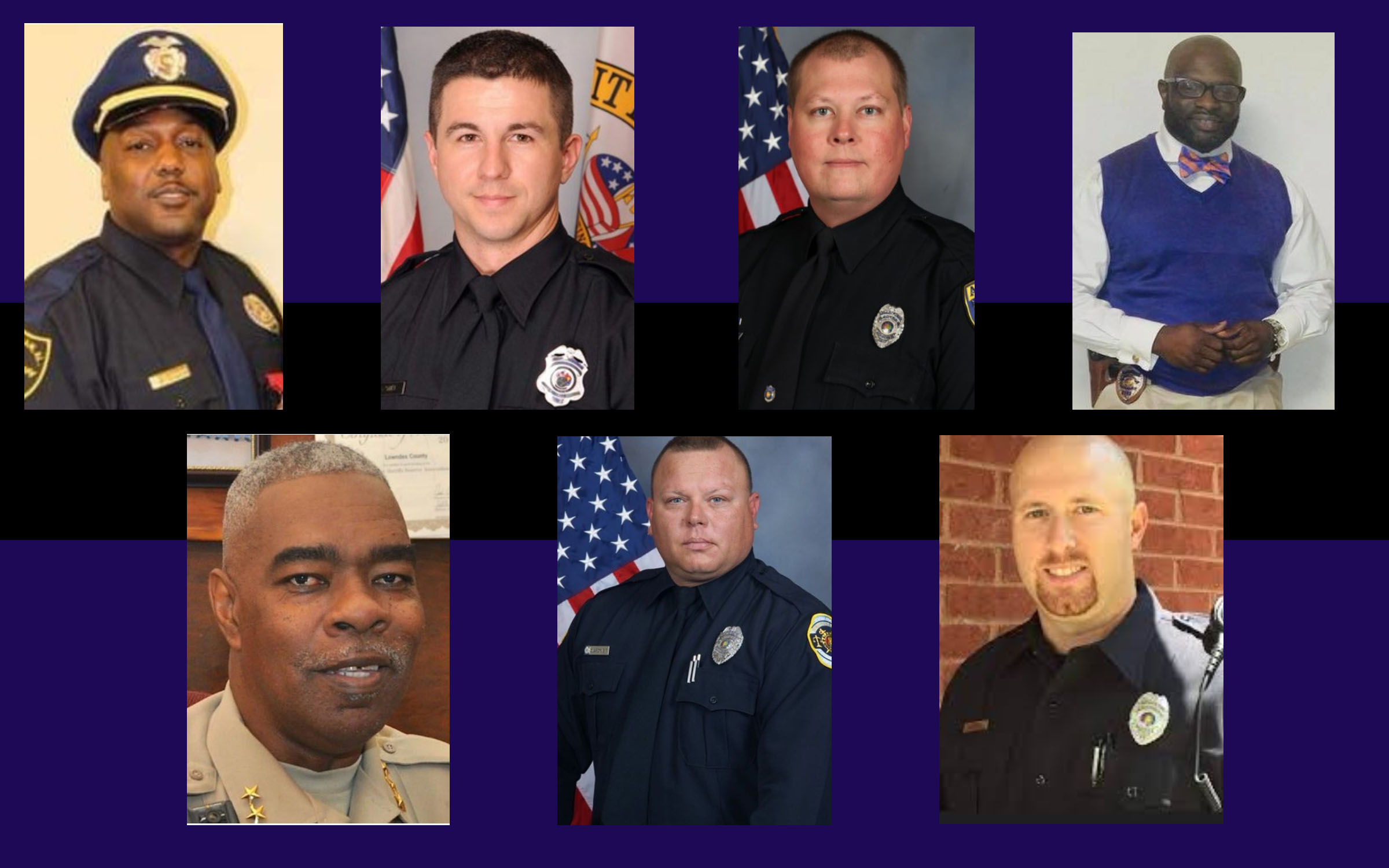 The most recent killing of a police officer happened on Feb. 4, when Kimberly Police Officer Nick O’Rear was shot in the head during a chase. He died the next day.

Marshall called the date historic for the state of Alabama. He also reviewed all deadly police shootings that happened in 2019.

“Each of these events, isolation, is unacceptable,” said Marshall. “When viewed together, the deaths of these heroes are even worse.”

Marshall said the past 13 months have been the deadliest for law enforcement in Alabama history.

“The first civil right of every person in Alabama is to be free from the fear of violence,” Marshall continued. “There are entire communities relentlessly burglarized, communities where drug transactions go on in broad daylight, and communities were stray bullets pepper fences and occasionally result in the deaths of innocent people, including children inside their homes.”

Marshall said changes need to be made in communities and in the minds of people across the state.

“We spend hours and hours in this town (Montgomery) talking about overcrowded prisons and very little about victims,” Marshall said. “Alabama does not have an incarceration problem, we have a crime problem.”

“As our society relies on that desire (for security) we depend on a thin blue line, our law enforcement officers to fulfill that desire and prevent anarchy from gaining a foothold in our communities.

“Good policing has become more difficult because of our culture and societal attitudes towards law enforcement.”

For parents, he urged them to talk to children about police officers and their responsibilities.

“A child’s opinion about police officers begins with you,” Marshall told parents. “Set the right example with words and actions. Explain to them that the men and women of law enforcement leave their families behind so that they can keep other families safe.”

For teachers, Marshall asked educators to highlight the career of law enforcement.

As for news media, Marshall said a false narrative has played out in televisions and computers across the nation.

“Think carefully before you publish stories and social media posts that paint law enforcement officers in a negative light before you have all the facts,” Marshall said. “You are driving a narrative that can be helpful or hurtful to community relationships with law enforcement.”

“The policies you pursue send a message to both criminals and law enforcement alike,” said Marshall. “Please make sure that you’re sending the right message.”

To citizens, Marshall said it is important people get involved in their communities by getting to know their police chiefs and sheriffs. He said it’s important to serve alongside law enforcement by reporting suspicious behavior so police can intervene before a crime occurs.

Marshall also addressed those who would consider harming a law enforcement officer.

Marshall said local, state and federal partnerships are stronger now than ever before.

For law enforcement officers, Marshall told them not to give up or lose heart.

“Keep fighting the good fight because your cause is righteous,” Marshall said. “Know that you have our support and our eternal gratitude … May God bless you and may He grant you protection as you strive to protect others.”

Alabama Association of Police Chiefs President Bill Partridge, who serves as the police chief for the Oxford Police Department, also took to the podium during the press conference Wednesday. He said although police officers are vastly outnumbered in Alabama, they create the fabric of our society.

“Without law enforcement, what do we have?” Partridge asked. “We have chaos.”

Partridge said as the father of a police officer, he knows the fear the families of officers face every day.

“There is no worse fear than your phone ringing late at night wondering what that phone call is going to be,” Partridge explained.

“When you have protests and you have individuals screaming, ‘Kill the police! What do we want now? We want dead police!’ What kind of society are we trending to?” he asked.

Partridge urged citizens and communities to push back on those narratives.

“I cannot fathom what these families have had to go through over the past 13 months in this state from burying their loved ones. Why? Because they took an oath to get up every morning and go out and protect our communities, do what’s right and put criminals in jail,” Partridge continued.

Partridge said an important role for families is to teach children how to be law-abiding citizens and to teach them to respect law enforcement.

Partridge said there are bad apples in every profession and when bad apples are identified, they are removed from law enforcement.

“Think about where you would be in your community if we had no law enforcement officers,” Partridge challenged. “We’ve got to stand up for these men and women and we have to push back against these false narratives and we have to let them know that we stand behind them every day when they go out and they do that job.”

Local law enforcement officers have also voiced concerns about the increased police killings. When reviewing the criminal history of the man accused of killing Officer O’Rear, they say it is difficult to understand how the suspect was on the street.

Johnson posted bail and was released from custody on Nov. 1.

Court documents show Johnson’s criminal history dates back to as early as 2000, with guilty pleas for crimes such as forgery, giving a false name to an officer, and drug-related crimes. Johnson has also spent time in prison for a drug and weapons conviction and for a drug conviction.

“We’re turning them back loose on the citizens, is what we’re doing,” said Chief Dennis Reno, of the Tarrant Police Department. “We’re actually turning criminals back loose to prey on victims.”

“They’re burglarizing cars and stealing cars to get money to buy drugs,” Reno explained. “They’re doing the stealing to buy the drugs to get high on, and when they get high, what do they do? They kill people.”

Reno also said recent changes in Jefferson County allow signature bonds for those who have a bond of $10,000 or less. That means, if an inmate’s bond is $10,000, they are able to sign out of jail without payment.

“They can claim overcrowded jails but it doesn’t matter,” said Reno. “Criminals now are wanting felonies because they aren’t being held in the county jail. They can go out and commit as many burglaries as they want and they’re turning them right back out on the street to commit more burglaries.”

Marshall said his office will look into what happened and what changes could be made to prevent further violence. He said there are already bills being considered in Montgomery to address issues in the state’s bonding system.

Reno said the Jefferson County District Attorney’s Office has not been issuing warrants for stolen guns found more than a week after they were reported stolen because it is impossible to prove the person in possession of the firearm knew it had been stolen. He said stolen guns have a direct link to police officers killed in the line of duty.

“I think most of the police officers that were killed last year in Alabama were killed with stolen guns but yet now, we can’t even put people in jail for it,” Reno added.

“Our hands are very much tied now. Criminals are the only ones that have rights, victims don’t have rights anymore.”

Preston Johnson is set for a preliminary hearing, in Jefferson County, at 9 a.m. on March 5, 2020.

A GoFundMe account has been set up for the family of Officer Nick O’Rear.