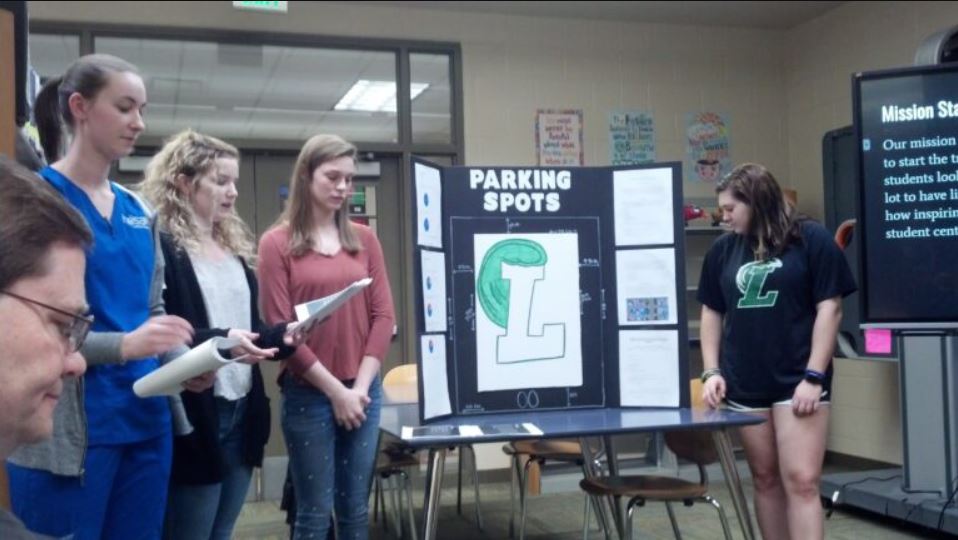 LEEDS — A regular meeting of the Leeds Board of Education began with a proposal by several high school seniors to begin a project that would allow students to paint their own parking spaces, with approval of school administration.

Briana Davis, Reilly Acker, Stephanie Beal and Taylor Clough gave a presentation for the board outlining a plan to allow students that purchase a parking permit to paint their spot if they pay an additional fee of $35 for painting supplies.

“We want our parking lot to have life and creativity flowing through it and for guests to see how inspiring our students are,” read the mission statement for the project.

Painting a spot will require students to abide by guidelines such as avoiding inappropriate artwork and to avoid using oil-based paint, as well as reflective, spray, fluorescent, paint sprayers and clear coat. The proposal will be considered by the board.

Following this, the board held its regular meeting with Superintendent John Moore. Local revenue for schools was up 11% compared to January of 2019. He also mentioned the after- school supper program that is being integrated is “working as advertised,” he said, speaking of reimbursement for meals.

“We’re talking about some real cash that’s going to generate,” he said. “I think we’re going to take something that’s a financial loss and make it a financial win.”

Afterward, Moore spoke of proposed legislation that would mandate a unified calendar for public schools in Alabama. The Alabama Association of School Boards has opposed the idea, advocating that calendar dates should be determined by the schools themselves.

“We’ve been asked to pass a resolution as every school board has that just simply says ‘We think the school calendar is best left in the hands of the local schools,’” Moore said.

In other matters, the Leeds Board of Education approved a request from the Leeds Middle School Band to make an out of the country trip to Toronto — funded by student fees — that includes attending a performance at Niagara Falls.

The board also heard from Facilities and Maintenance Manager Jim Simpson about the central office and the press box at Leeds Middle School. Progress on the press box, he said, should be finished by next Monday. Moore said that a ribbon-cutting will be held for the press box but that a date hasn’t been set yet.

The next Leeds Board of Education meeting will take place on March 10 at the Leeds Middle School Library at 6 p.m.