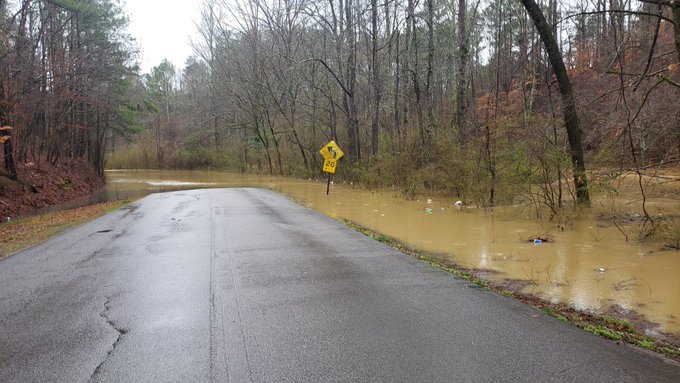 Hartselle schools canceled for the day because water from a rising creek flooded a water pumping station, the Morgan County Sheriff’s Office said in a statement posted on Facebook. Utility officials in the town of about 14,000 people asked residents to conserve water.

“With the current flooding along the Tennessee River, TVA is doing everything to try and manage the water levels in the rivers and creeks,” said a statement from Bob Sittason of Hartselle Utilities.

Elsewhere, transportation officials shut down a major highway leading to Huntsville because of a crack that developed in the road after days of heavy rain. Crews were repairing both sides of U.S. 231 near Lacey’s Springs, forcing commuters to take detours.

Flood warnings cover much of north and west Alabama. Workers had to clear roads in Lawrence County after strong winds overnight knocked down trees that toppled over in saturated soil.

A flood warning for the Tennessee River at Florence, located in northwest Alabama, is in effect until Feb. 20.

Parts of central Alabama have received more than 6 inches (15.24 centimeters) of rain since Tuesday, and rainfall totals in excess of 3 inches (7.62 centimeters) were common.