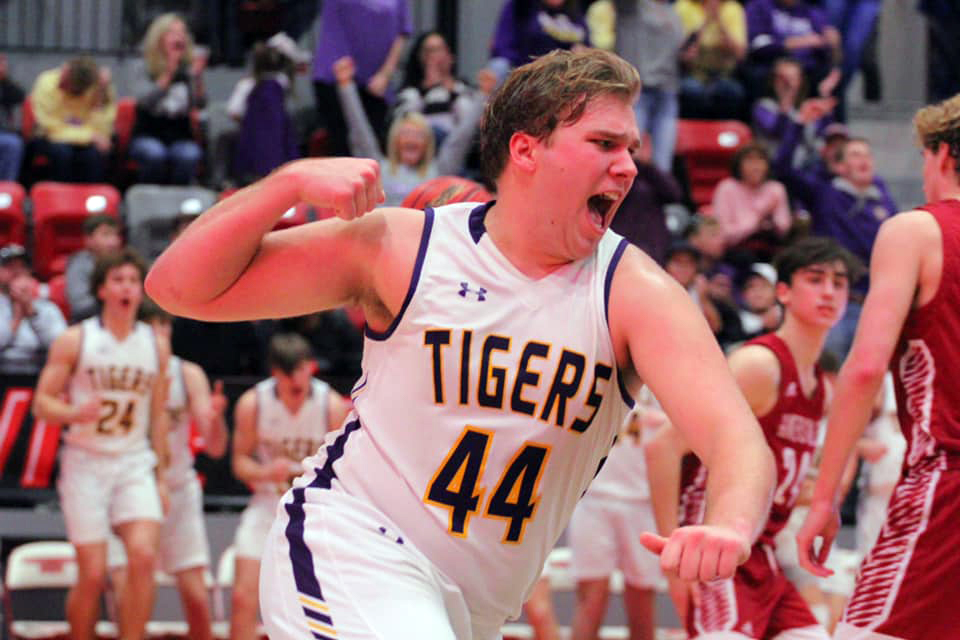 Springville's Ben Bianchi celebrates in the second overtime of the Sweet 16. Photo by Joshua Huff.

JACKSONVILLE — With 1.2 seconds left in overtime and the score knotted at 52-all, Springville senior Jace Hayes committed the ultimate sin: He fouled Gunterville’s James Davidson from beyond the arc as the sophomore let go a desperation heave just prior to the buzzer sounding. Now instead of double overtime, Springville was faced with the possibility of its season ending as a result of an errant play from its trusted senior. That sequence followed a William Goolsby 3-pointer with 15 seconds left in overtime that returned Springville back from the dead to even the game at 52. With their season seemingly salvaged for yet another four-minute quarter, all the Tigers needed to do was settled into defense with one goal in mind: Do not foul.

Much easier said than done.

With the clock winding down, Guntersville’s Brandon Fussell took the ball up the court, stopped at the top of the key, passed the ball to Davidson, who then called for a screen at the top of the arc, dribbled to his right and jacked up a wayward shot from the top right of the arc with Hayes draped all over him. However, during the shot, Hayes’ body landed in Davidson’s bubble and he was subsequently called for the foul.

One made free throw was all Guntersville needed to place the final nail in the coffin. The Tigers would have been hard pressed to push up the court and haul off a decent shot with 1.2 seconds left.

All Springville could do was wait with baited breath.

The second free throw hit the left of the rim and rolled to the right.

The third free throw hit the back of the rim, bounced straight up and fell back into the arms of Davidson, who had darted to the rim as soon as he knew he had missed the shot. As the clock sprinted to zero, Davidson threw up one last shot, this time from about a foot away, and watched yet again as the ball fell harmlessly to the court.

Holy hell. Springville survives in OT after Guntersville is fouled from beyond the arc and misses all three FTs. Game heads to second OT knotted at 52. @TribSportsLive pic.twitter.com/KLlc9OzI0c

That relief and that second wind carried the Tigers into the second overtime and ultimately past a Guntersville team that seemed destined to book its ticket into the Elite Eight. Instead, Springville rode the clutch shooting of Hudson Kersh and the paint dominance of Ben Bianchi to a 66-53 victory in front of a frenzied crowd within Pete Mathews Coliseum on the campus of Jacksonville State University.

The win set up yet another matchup against Class 5A, Area 10 foe Center Point, which made easy work of Arab.

The contest against Guntersville on Saturday in the Sweet 16 of the Class 5A state tournament was a back-and-forth affair throughout. However, it was the Tigers’ solid shooting in the second half that proved to be the deciding factor.

The Tigers were led by Kersh’s 16 points. Bianchi recorded 15 points and 10 rebounds, and Larry Winston added 15 points with three 3-pointers to his credit.

Springville will return to Pete Mathews Coliseum on Wednesday, Feb. 19 at 10:45 a.m. to face Center Point in the regional championship.