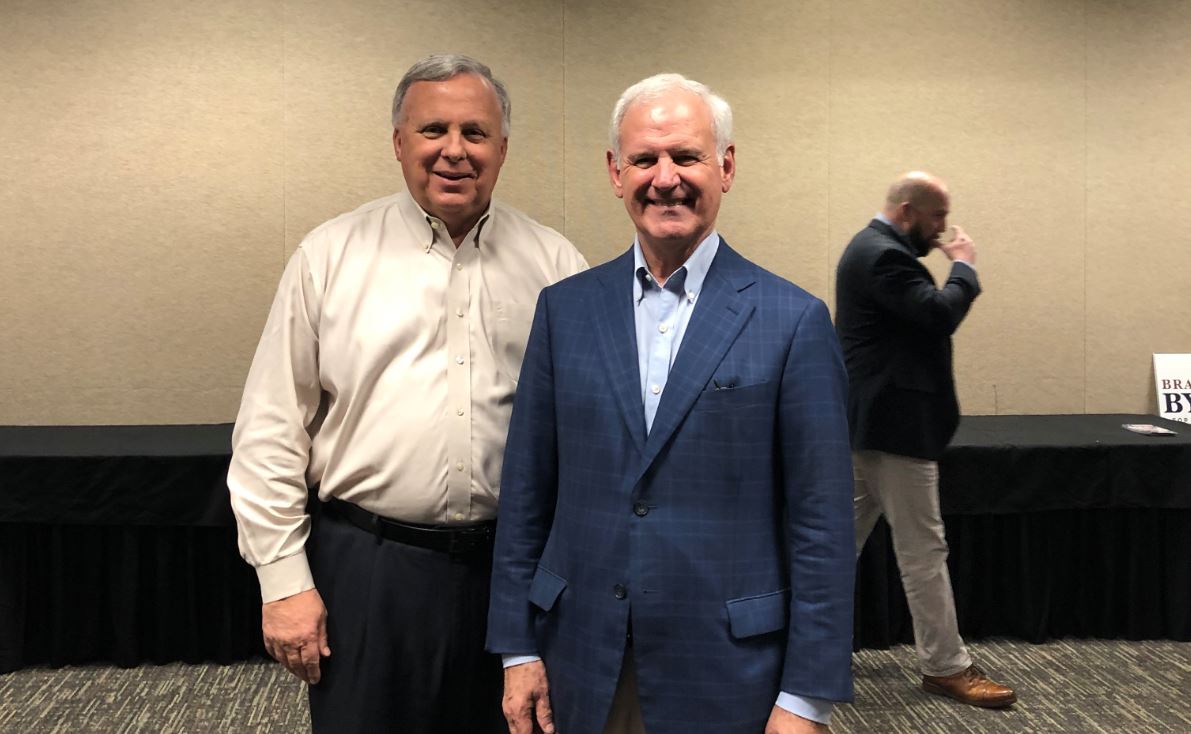 TRUSSVILLE – Candidate for the U.S. Senate Bradley Byrne met with the citizens of Trussville at a meet and greet on Tuesday, Feb. 18, 2020.

Mayor Buddy Choat was on hand for the event at the Trussville Civic Center. Members of the public had the opportunity to meet with the Republican hopeful and to find out what his candidacy is all about.

Byrne, who represents Alabama’s 1st Congressional District in the U.S. House of Representatives, shared what he is passionate about and his vision for what his time in the Senate would accomplish.

“Restoring unity to the United States Congress, both the House and the Senate,” said Byrne. “We can’t remain a divided country and deal with the challenges we have all over the world. The Democrats aren’t going to give up, I understand that. After they’ve lost this impeachment they’re going to keep fighting and as long as they keep fighting, we’ve got to keep fighting too. We’ve got to get this country back together again, built around the values that have made us who we are.”

Byrne made the decision to seek the office because of events surrounding the special election to replace Jeff Sessions in 2017.

“At the end of the special election in 2017, which I basically stayed out of, I felt so bad,” said Byrne. “I mainly felt bad because of the way that Alabama came out looking in that. I actually went on some national news shows to express to them (that) what you’ve just seen in the last several weeks is not Alabama. I realized that we needed a candidate in this race that was going to put a much better face forward for the State of Alabama, and someone that will get in there and realize that their job is to represent the state of Alabama … I traveled around the state during 2018 and talked to people and I was encouraged to run.”

Byrne believes that he is the best candidate for the job because of the fighting spirit and effectiveness that he will bring to the position.

“I’m a fighter,” said Byrne. “The reason President Trump invited me to the White House and the reason he called me out, along with about a dozen other House members, is because I was one of the principle people fighting for him during this impeachment trial; but I’ve always been a fighter. I was a fighter when I cleaned up the Alabama two-year system of corruption. I was a fighter in the Alabama Legislature. I’d much rather work with people than fight with them, but in Washington, it’s one fight after the other. And I’m good at it, I’m effective at it.”

Over President Trump’s time in office, he has been faced with opposition from the legislative branch. Byrne wants to use his time in office, in part, to help the president move forward much of his agenda.

“He (President Trump) needs to know that Republicans are on his side,” said Byrne. “I vote with him 97% of the time; I don’t vote with him 100% of the time. But he knows I’m on his team. Secondly, he needs people, especially in the Senate, that — when it is time to dig in — dig in, but dig in an effective way that the people that are opposing him understand that it is going to be hard to defeat his position. He understands that there are a group of us that have become closer to him because of what we have been through. He knows that I’ve got his back and I’ll go out and do what I can to make sure his platform succeeds and he needs more people like that in the Senate.”

Byrne believes there are several key factors that distinguish him from the other two men seeking to be the Republican nominee for the Senate election.

In a recent ad from the Session’s campaign, it was implied that Byrne, along with Tuberville, has resorted to “desperate and false attacks” on Sessions. Byrne responded to the nature of the ad.

“The record is that I vote with the president 97% of the time,” said Byrne. “The record is the president was grateful enough to me, that I stood with him in a time that was very important, that he invited me to the White House and he publicly thanked me. I think that tells the people of Alabama everything they need to know about my standing with President Trump.”