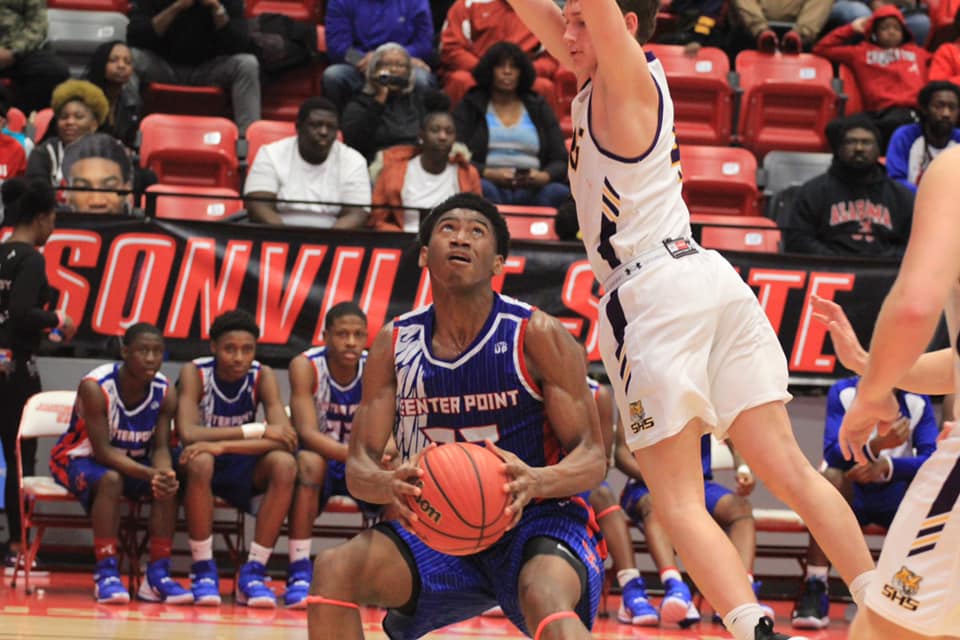 JACKSONVILLE – Only one game stands before the Center Point boys’ basketball team and a championship game berth following Tuesday’s 43-24 victory over Class 5A, Area 10 foe Springville in the regional championship game at Jacksonville State University.

The Eagles’ victory avenges two consecutive losses to the Tigers, who claimed the regular season series, 2-1.

Despite those losses, one good nugget emerged: Tape 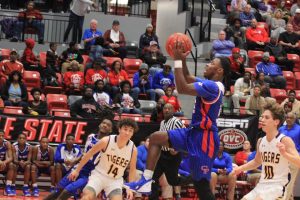 For Center Point to continue its run through the state tournament it had to solve a problem that had caused the Eagles fits in the previous outings: Corralling a Springville team that feasts in the paint.

Led by Hudson Kersh and Ben Bianchi, the Tigers exploited Center Point in the final two matchups of the regular season.

Chatman was intent on not allowing that to happen again.

“I almost felt like I was in college again, getting ready for this game,” Center Point head coach Rodney Chatman said. “I literally had video after video. Any moment that I had of downtime, I was looking at the Springville game. I knew that I had to bring something to the guys in the gym. I did a lot of breaking down, a lot of subtle stuff that you can’t really see on the first look. We just spent all our time trying our best to make sure that we stayed focused on the details.”

As strategic as that sounds, Springville found itself in the same position with the same amount of footage. As a result, the Eagles tweaked their gameplan to shift focus from leading scorer Jordan Chatman to other shooters like Jonathan Dudley, Jayson Jones and William Nall. Rodney’s foresight worked as Springville came out of the gate with a focus on attacking Jordan.

“It worked today,” Rodney said. “A lot of attention was on (Jordan). They came out aggressively early. By the time it even looked like that Jordan was going to try to get in the game, it wouldn’t have mattered, because the other guys were feeling it. That’s why I’ve been emphasizing that we’re a team. I’m so proud of them.”

The outcome itself was never quite in doubt following the first quarter.

Center Point jumped out to an early 4-0 lead, which stretched to 11-6 with two minutes left in the opening frame following a Dudley 3-pointer.

Rodney’s devotion to diving into the nuisances of the previous outings paid off as Center Point’s defense swarmed the Tigers. Unable to feed the ball down low, Springville was forced into contested shots and multiple miscues.

The Eagles’ lead ballooned to 18-8 midway through the second quarter following a 6-2 run. That lead blossomed to 23-10 after Jones’ buzz-beating 3-pointer to end the first half. Center Point utilized an 11-4 run in the quarter. Its defense held the Tigers to just four points in the second.

“It feels good,” Jones said following the game. “I was on the bus ride coming up here in the morning and was like, ‘Wow. We’re one step away from the Final Four.’ Last year, the Sweet 16 was as far as I got. I was like, ‘I’ve got to come through for my team.’ And playing in my home, where I’m going to go to school at, I might as well suck it up and come through for my team.” 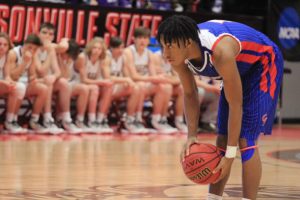 Springville returned to the court in the third quarter in need of a classic Kersh-led rally.

Unfortunately, that was not meant to be. The Tigers managed to score just four points in the third as Center Point expanded its lead to 31-14 entering the final quarter. The fourth quarter proved to be just an eight-minute clock watching fest as Center Point was content to bleed the clock.

The Eagles were led by Jones’ 13 points. Dudley followed with 12 points and Nall recorded eight points.

The victory for Center Point sends it into the state semifinals against Ramsay at 4:30 p.m. on Wednesday, Feb. 26, 2020, in Birmingham’s BJCC Arena. Ramsay enters the game following a 76-52 victory over Sylacauga in the regional championship. Ramsay sits at 25-7 on the season.

Center Point and Ramsay previously faced each other in the 2013 Northeast Regional Championship game. The Eagles won, 41-39.

“Each season takes on its own identity,” Rodney said. “The kids that helped us last year are gone. Now, whatever role that you had last year, you’ve got to do it and still make up for what we lost. I think our schedule speaks a lot for us. Most of the schools in the Birmingham area are tough. We have to play them to have a schedule. It kind of helps us get built for this.”

Center Point boys join the girls in the Final Four after Eagles’ defense silences the Tigers. It wasn’t pretty, but a relatively balanced offense did its job to hold off a hot Springville team. @TribSportsLive @PrinVanPhillips @CoachBates7 pic.twitter.com/GDZAiXhPXe