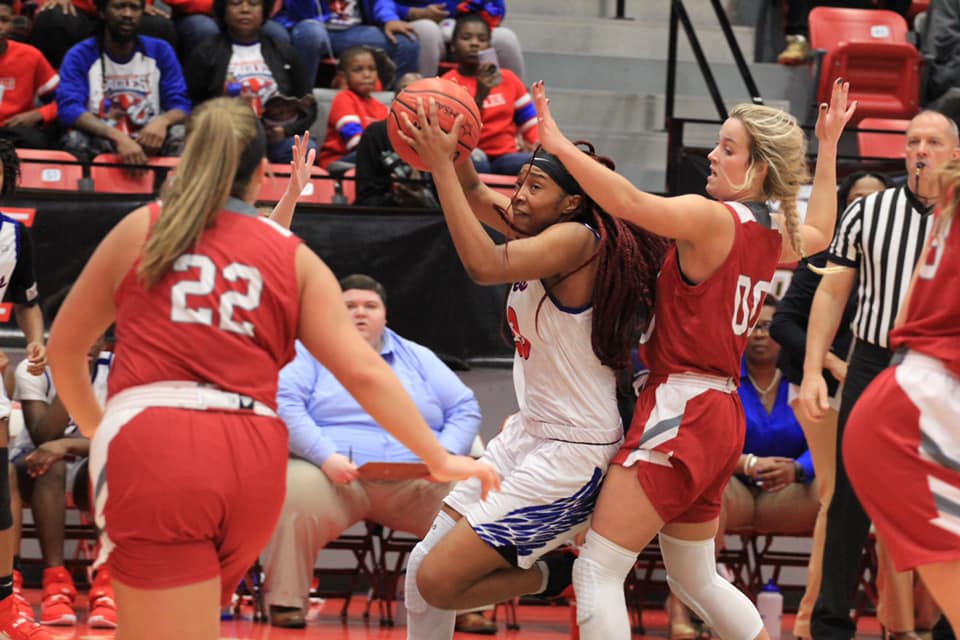 Center Point's Aniyah Brooks drives to the lane during the Eagles' regional championship victory over Boaz. Photo by Joshua Huff.

JACKSONVILLE — In just one season at the helm of the Center Point girls’ basketball team, head coach Tamara Gills has guided the Eagles to the Final Four following Tuesday’s victory over Boaz, 36-32, in the regional championship game at Jacksonville State University.

The wins wraps Center Point’s run through the regional rounds at Pete Mathews Coliseum. In that span, the Eagles defeated both Brewer and Boaz, which proceeded a sub-regional round victory over Alexandria to open the state tournament. During that run, Center Point allowed its opponents to score just 39 points per game. 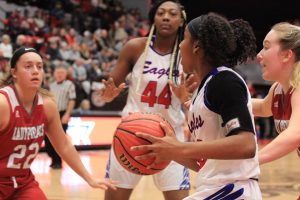 “All things happen for a reason,” Gills said. “From day one, that’s what we’ve been talking about. They didn’t believe me at first. But you know what hard work can get you. Here.”

That defensive dominance was on display in the regional final against Boaz. The Eagles hemmed in a Pirates team that put up 46 points against Southside-Gadsden in the regional semifinals. Center Point’s ability to stake its success behind its defense was crucial as the offense decided to call it a wrap on the day before the opening tip.

The Eagles would not score their first point until midway through the opening quarter following a Tanita Swift 3-pointer, which proceeded three consecutive missed free throws. Her 3-pointer evened the game at three-all. Center Point would then take a 9-6 lead into the second quarter despite converting on just three shots.

Boaz shot just 15% from the field in the first quarter.

The Pirates managed to tie the game just moments into the second quarter, but Center Point pulled out ahead by five points with four minutes remaining in the half thanks to an Aniyah Brooks 3-pointer. The Eagles concluded the first half on a 5-0 run to take a 22-15 lead into the half.

That run allowed some breathing room for Center Point as the Eagles suffered an untimely blow as Swift picked up her third and fourth fouls seconds apart early in the third quarter. At the time, Center Point nursed a 27-21 lead following Brijourne Williams’ nice Euro step layup with 3:12 to go in the third.

Boaz was not done just yet, however. The Pirates pulled to within two points, 27-25, after an Emily McDuffie 3-pointer.

Center Point extended upon that lead to open the final quarter after an Alandria Calhoun jumper, but Boaz tied the game at 29-all with four minutes to go in the game. Moments later, in quick succession, Swift fouled out and Brooks was forced to step into the role of facilitator. Her layup with 2:27 left in the game gave the Eagles a 31-29 lead, which turned into a 5-3 run over the final minutes of the game.

“When (Swift) first fouled out I was like, ‘Oh, man. Dang,'” Brooks said. “But I felt like I had to step up … I had to let everyone know that this is why I came here. I just wanted to make everybody proud.”

The Eagles were led by Brooks’ 12 overall points. Calhoun followed with 11 points and 10 rebounds, while Swift recorded five points.

Center Point will return to the court at 3 p.m. on Wednesday, Feb. 26 in Birmingham’s BJCC Arena to face Charles Henderson in the state semifinals. Charles Henderson sits undefeated at 22-0 on the season. It scored 70-plus points in two out of three state tournament games.

CP books its ticket into the Final Four thanks to masterful defense and a fourth Q dominated by Aniyah Brooks. Eagles will next travel to Birmingham to fight for a berth into championship game. @TribSportsLive @PrinVanPhillips @CoachBates7 pic.twitter.com/YdM3zsKuJg