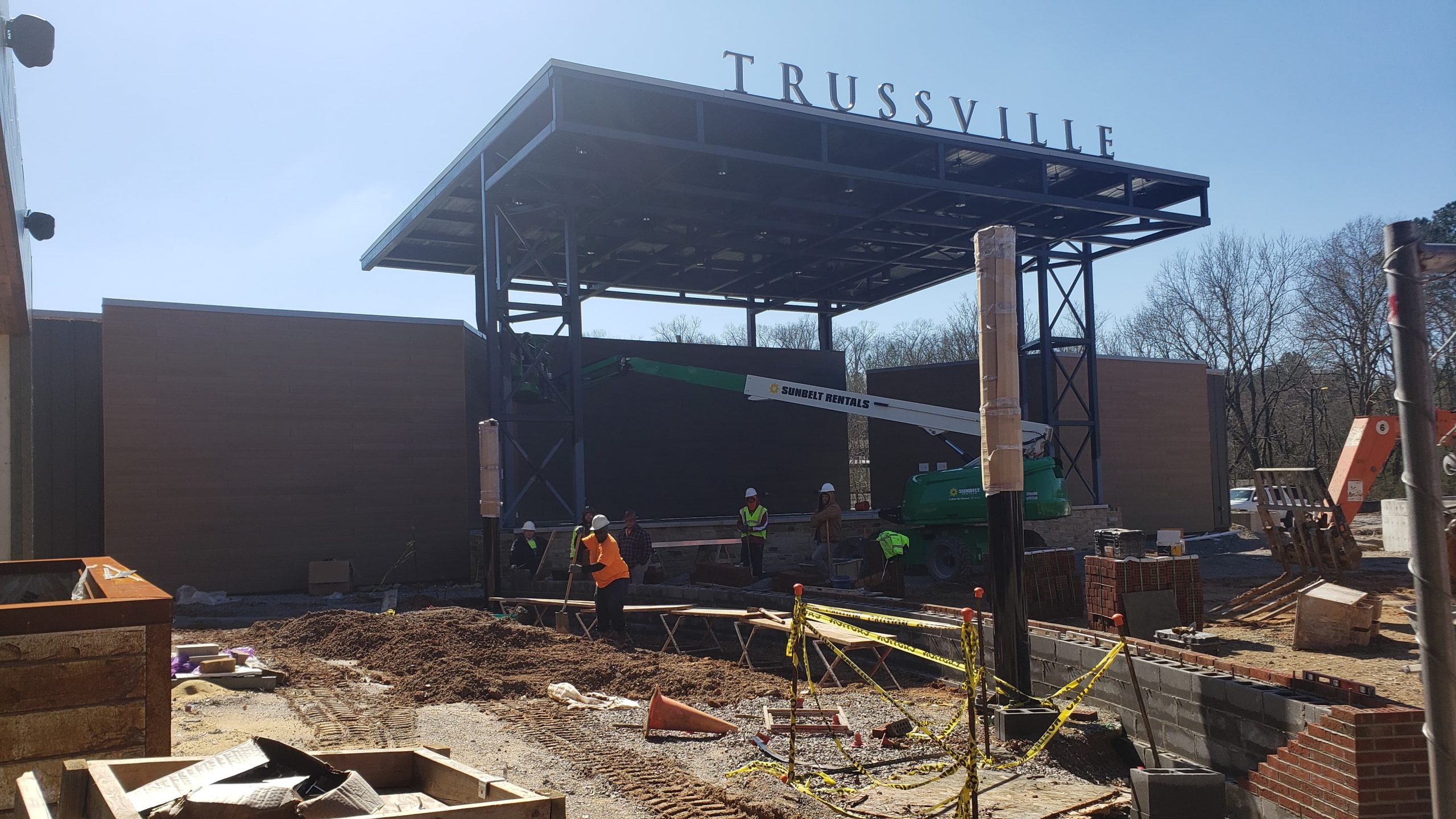 TRUSSVILLE — Downtown redevelopment in Trussville has been delayed because of recent weather. Mayor Buddy Choat said the project in Quad I, which is known as the Entertainment District, should be completed about two months after the original target date.

“We had projected the end of June,” said Choat. “It’s now been pushed back to August because of all the rain.”

The stage and the pavilion are up near Ferus. Now, crews with Russo’s Contracting are working inside Beech Street and Morrow Avenue.

Choat said contractors and engineers are meeting bi-weekly to update construction status. He hopes after streetscapes, lighting and access to the area is complete, private businesses can begin work on mixed-use buildings and restaurants.

“The rain has kind of pushed everything back,” explained Choat. “I know people see work being done but the reality is, with the terrible spring last year, trying to get Valley Road in, and then this rain, all the projects could take a little longer.”

Other projects, such as the loop roads and the Downtown Plaza, are also underway.

“We were planning on April or May to start work on the new intersection with the clock,” said Choat. “But now it may not be until June or July.”

The clock Choat is referring to is a clock being donated by the Rotary Club. The clock will be the centerpiece of Quad II development. Choat said the clock has been ordered.

One project that is on track is the loop roads plan. There will be two roads connecting to North Chalkville Road, to make it easier for drivers to navigate through downtown.

The city is currently working with Tillman Consulting LLC to acquire right-of-way and temporary easements, in order to move the project along.

Engineers have worked on a plan that includes a potential roundabout by First Baptist Church Trussville.

It should be mentioned that during council votes concerning the loop roads, Councilman Alan Taylor has abstained because he works for the Baptist church.

The roundabout could be placed on an extended Talley Street, at Glenn Avenue, in order to give full access downtown, without requiring drivers to enter Chalkville Road.

“This roundabout gives us the best option to do that and allows to slow the traffic down enough,” Choat said. “It would be our first roundabout and so, it really looks great. It’s going to be good.”

Another proposed loop road would go from Vann Circle to North Chalkville Road.

“That opens up some potential commercial space,” said Choat. ”

There will also be a dedicated turn lane installed on North Chalkville Road, giving access to that loop road.

“This will ensure traffic won’t back up on Chalkville Road,” Choat added. “There will be a designated turn to keep traffic moving and it will have a traffic signal.”

Choat believes property acquisition could be completed by the end of 2020. After that, the project could begin and it could take 12 – 18 months to complete.

“It will involve a lot of infrastructure in that area,” he said. “It will be a big job. I do think it will be either the end of ’21 or the beginning of ’22 when that’s done.”

As for the city’s Bicentennial Celebration this summer, Choat said he still hopes the stage and pavilion area will be safe enough to bring people in for the event. However, if construction is not completed by then, the city could hold the celebration in the property across from City Hall.

The band Three on a String has signed on to perform at the event.