Photo courtesy of the City of Clay's Facebook page

CLAY — The Clay City Council met for a special called meeting at 5 p.m. on Thursday, March 19, 2020. During the meeting, the council unanimously approved Resolution 2020-04, declaring a local state of emergency in the city of Clay.

“This has happened once before, during the tornado,” City Manager Ronnie Dixon said. “It’s based upon Governor Ivey’s declaration and the Alabama code. You’ll see that in paragraph two and five. In paragraphs 6-7, you’ll see what the city is attempting to do.”

Paragraphs 6 of the resolution states, “WHEREAS, taking action to close all facilities to everyone except authorized personnel; cooperating with our community partners to provide meals to children under 18 years of age throughout the city; suspending usage of city facilities by outside groups; not charging leave of any kind against any full-time employees during this period of emergency; and holding any Council meetings that may become necessary during this time via electronic means to perform essential minimum functions will serve a public purpose by supporting state and county health officials’ efforts to limit the spread of the virus in Alabama, thereby promoting the general welfare of the community.”

Resolution 2020-04 can be viewed in full at the end of this article.

Under the City Manager’s report, Dixon addressed several areas of concern regarding the city of Clay’s response to the ongoing COVID-19 situation.

“Of course you know the governor issued a proclamation on Monday and then a second edition yesterday. The main thing that she corrected yesterday was the dichotomy between what the code (of Alabama) says and what the open meeting act requires, as far as meetings,” Dixon said. “So after today, since we already had Planning & Zoning set up for tonight, we decided we could go ahead and have this (council) meeting, as long as everyone kept their social distancing … After that, we will be teleconferencing.”

Dixon said that the next city council meeting, via teleconference, is set up for April 14, 2020.

“That will be our regularly scheduled meeting, unless there’s a reason to call another emergency meeting like this,” he said.

Dixon added that the state health officer, today, issued another finding that the city hopes will help with the circumstances of closing Cosby Lake Park.

“The county health officer is the one who issued the order to close parks the other day, not the city of Clay,” Dixon said. “It says so on the sign: It was closed by order of Dr. Mark Wilson. So all of the Facebook posts, people need to … read the sign. The city of Clay, none of its officials, nor its deputies are there to enforce a finding of the local health department.”

Dixon confirmed that all of the city of Clay’s rental facilities have been closed, along with the library and senior center.

City Hall will remain open, but the front doors will be kept locked and only one person at a time will be admitted into the lobby. The city will continue to sell car tags and business licenses, until ordered otherwise.

City employees in Public Works and Parks & Recreation will continue to work during this time, as well.

“Right now the only thing that we see affecting us is that they pushed the runoff (election) to July 14,” Dixon said. “That’s right in the middle of municipal elections, as far as qualifying and campaigning. So they pushed it as far as you can possibly push it and still be able to take the machines and reprogram them in order to have municipal elections.

“So I think that’s going to be our baseline of how we judge how long this is going to go on, but we certainly expect it to be extended past April 6 for all of the orders including school closings.”

Dixon added that the city does have a contingency fund in place, “in case something even more extraordinary happens.”

The previously scheduled March 31 meeting of the city council has been cancelled, and was replaced with Thursday’s meeting. 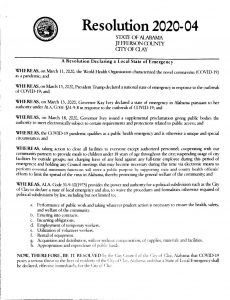 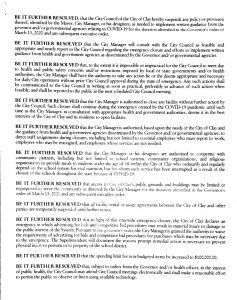 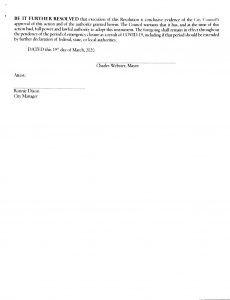