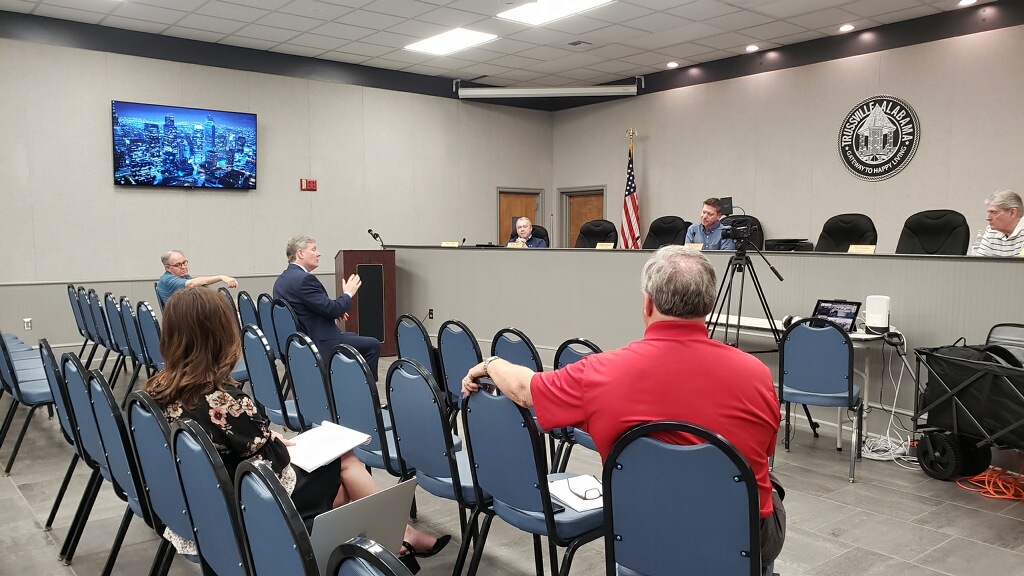 TRUSSVILLE – The Trussville City Council continued to remain at odds on Thursday with how to fill a school board position set to be vacated in the coming months.

Much like the workshop on March 5, the council members debated amongst each other as to whether the city should appoint a new member to the school board or reappoint Board of Education President Kathy Brown, whose position is expiring at the end of May.

The board members were at odds with one another with the majority of the members firm in their beliefs that the school board position be reappointed to Brown, who has been on the board since December of 2014. Brown, a Trussville resident since 1988, works part time at Brookwood Advanced Wound Care Center. She has served on the Trussville City Schools Foundation while also serving in several roles for the Hewitt-Trussville Athletic Foundation since 2002.

Those for reappointing Brown made the case that the board and the city would best be served by an individual who has gone through the indoctrination period and has witnessed firsthand the difficulties that come with being a school board member.

Council member Brian Plant, who said that historically the council has reappointed members who voiced interest in another term, believes that at this time that stability should be the driving factor in filling the position. Three of the five current school board members have been in their positions for three years or less. Only Brown and Stan Garrett have been school board members for more than five years.

“I would like to see us maintain stability on our board,” Plant said. “Especially at the critical time that we’re in right now. We don’t know whether the (school) system is going to be out till May or till August.”

Plant was joined by Mayor Buddy Choat, who believes that the board needs experience over new blood. Though Choat agrees with Council President Zack Steele that the board should be seeking out the best possible candidates, the experience that Brown brings to the table is more ideal than breaking in a new member. Choat finds it hard “to find a reason to not reappoint a person that has served more than one term, who has served as a president of that board and who has not had any reason to cause doubt in my mind if I had a vote to displace that person.”

Steele, along with council member Perry Cook are proponents for filling the position based upon qualifications and allowing candidates to be interviewed.

Cook believes that it would serve Trussville best if the school board was filling positions based upon qualifications and new ideas instead of time served.

“When we a started our school system, the goal that we set for our school board was to get our system to the best of the best of the best,” Plant said. “They’ve done everything that we’ve asked them to do. Is this the message that we want to send them for bringing us these results. Is this message that we want to send to our school administration, all the way down to our teachers, our lunch ladies, or janitors or bus drivers? Are we saying that this is not good enough when we are ranked at the top of the top of our state.”

The decision on who to appoint and the process of how it will occur was tabled until the next council meeting.

Posted by The Trussville Tribune on Thursday, March 19, 2020