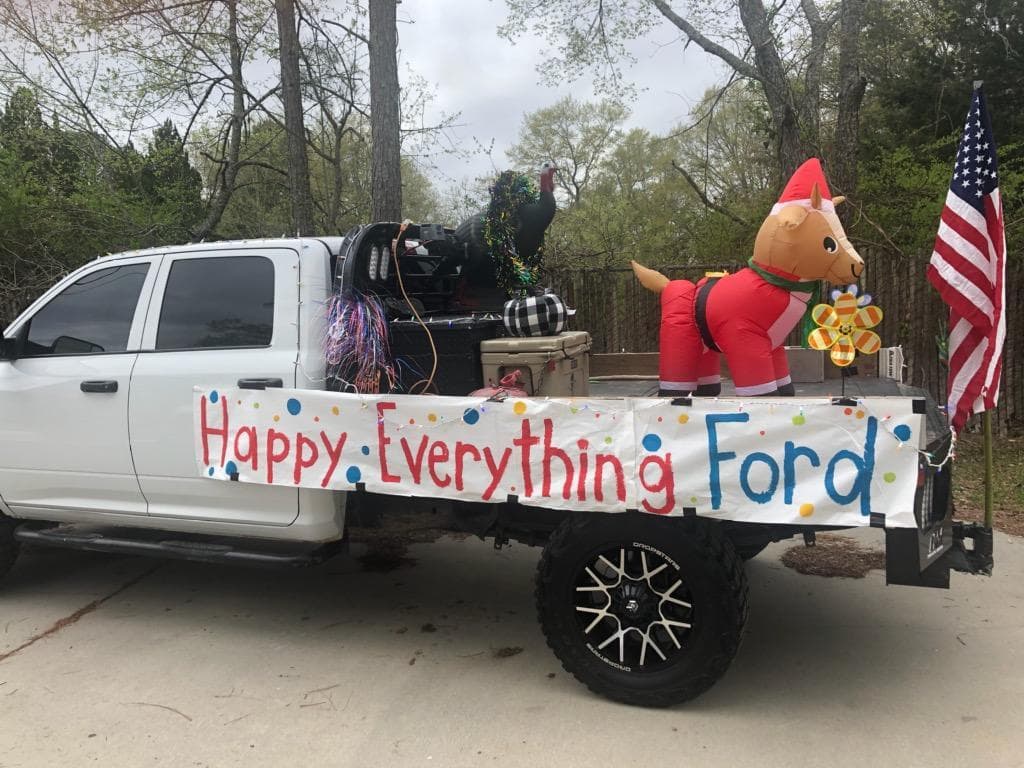 The Johnson family decorating their truck for the Happy Everything, Ford! parade. Photo: Lauren Keith.

TRUSSVILLE — A parade of happiness came through the city of Trussville on Saturday, March 21, and it was all in the name of a child battling leukemia.

Ford Bertrum, 4, was diagnosed with leukemia in February. Since then, he has been in and out of the hospital, undergoing treatments and therapies.

Ford was able to come home from the hospital on Friday, March 20. The next day, a big surprise pulled up in front of his home.

“When they surprised him he couldn’t believe he had his own parade,” said Amelia Bertrum, Ford’s mother.

Several community members got together and planned a parade they called “Happy Everything, Ford!” One of the organizers, Laura Keith, said the families involved planned the parade in one day. They all went through their storage and looked for bright, festive items to turn their vehicles into parade floats.

“We did whatever we could come up with from stuff in the attic,” explained Keith. “We even had lights on some of the cars.” 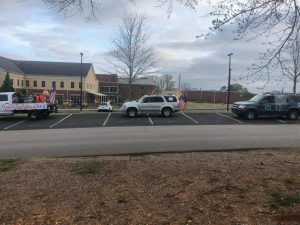 Keith’s husband, Samuel, also helped make the parade possible. Other community members who joined in were Destini Malone and Brett and Kimberly Johnson, along with their kids.

As the parade made its way to the Bertrum home, Amelia, Ford, and Ford’s father, Matt, came out to see what all of the fuss was about.

“We knew they were going to drive by but we had no idea it was going to be a parade,” Bertrum said. “The fact that they thought to decorate their trucks and to drive by just so he could see it really meant so much to us.”

Amelia Bertrum said the parade happened at the perfect time.

“It was so sweet that they thought of him because he’s actually had a really bad day today,” said Bertrum.

“He ended up having pulmonary embolisms that they found on accident, so he has to take shots to break up those clots,” Bertrum said.

That’s just another reason his mother said anything that can bring a smile to her son’s face throughout the day helps. 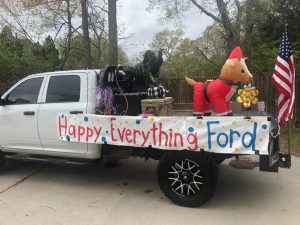 The Johnson family decorating their truck for the Happy Everything, Ford! parade. Photo: Lauren Keith. 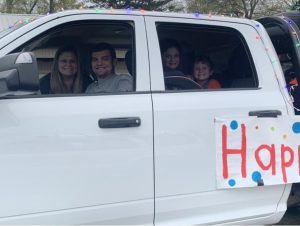 “The cars were just so decorated,” Bertrum explained. “They just got what they had. They had Sponge Bob, Christmas decorations and everything. It was so funny.”

Keith said the parade drove by the Bertrum house several times so that he could enjoy it.

“He giggled and just smiled the brightest smile, it was so sweet,” Keith said.

The parade of happiness not only brightened little Ford’s day, but also helped those who organized it.

“It’s been a breath of fresh air to focus on something else,” Keith explained. “It was very therapeutic for us to do that for him.”

The parade didn’t stop after leaving the Bertrum home. 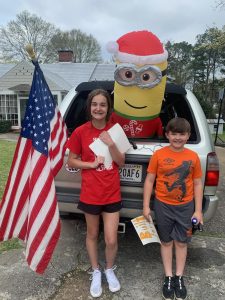 “We thought since we had the cars all decorated that we would just drive through the Cahaba project area and maybe make some other people laugh,” Keith said. “We were really shocked at how excited everyone was and just how much it meant to everybody that we gave them a little laughter so they could forget about what all is going on for a second.”

For the Bertrum’s, community support has gotten them through the toughest times.

“We are so thankful for everyone who has reached out,” Amelia Bertrum added. “But this parade, he hasn’t stopped talking about it. It made his day! It’s the little things.”

Video made by Tandi Smith can be viewed below.