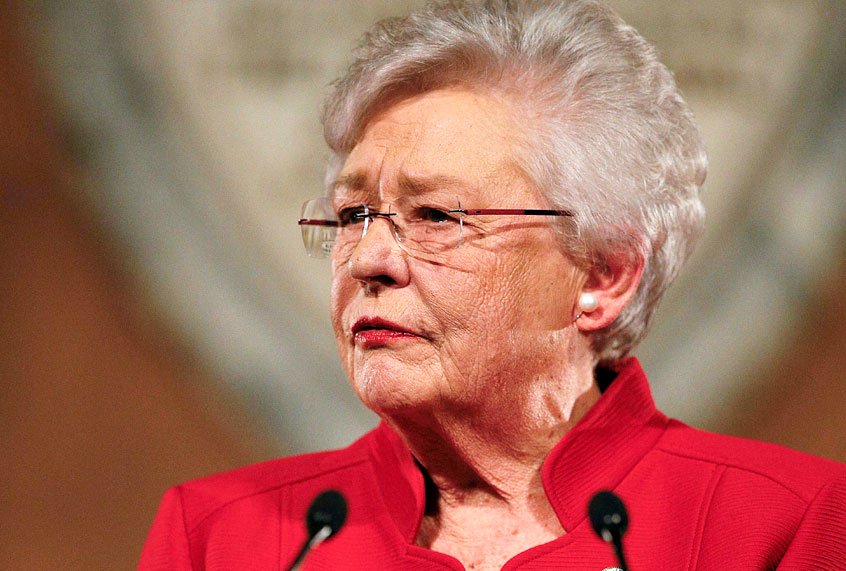 MONTGOMERY – Alabama Gov. Kay Ivey announced on Tuesday that the state’s stay-at-home order enacted on April 4 was working to slow the spread of the coronavirus.

“I’m personally grateful that so many people appear to be staying at home and taking the order to heart,” Ivey said. “All indicators suggesting that it is working. And I cannot over emphasize enough the importance that it is imperative that we keep doing what we are doing. Now is not the time to let our guard down and pretend that things are back to normal.”

Alabama was one of the last states in the nation with more than 1,000 coronavirus cases to issue a statewide stay-at-home order. Alabama had 2,006 confirmed cases and 53 deaths at the time that Ivey ordered the stay-at-home order, according to figures from Johns Hopkins University. The order went into effect on Saturday, April 4. Ivey’s refusal to issue a statewide order was based on her concern of the economy.

“You have to consider other factors,” Ivey said of her decision to not establish a statewide order. “Such as the importance of keeping businesses and companies open and the economy going as much as possible. When a business closes down, it’s almost impossible to bring it back to life.”

Ivey had added that those who criticized her for her inaction to provide a blanket response to the coronavirus pandemic that other factors must be taken into account, such as protecting the local economy as much as possible. She said that she believed that Alabama’s economy did not need a full shelter in place at the moment nor in the future.

“Government can choke businesses,” Ivey said. “We do it every day with regulation and bureaucracy. Folks, if we kill businesses we can’t print enough money in Washington, D.C., to bring a dead business back to life.”

However, fierce criticism followed her refusal to issue such an order despite the numbers of cases rapidly growing in the state.

“I would like to see one because it sends a strong message to the people of Alabama about how significant it is to use the social distancing, to use whatever means necessary to stop the spread of this virus,” Sen. Doug Jones said during a news conference several weeks ago. 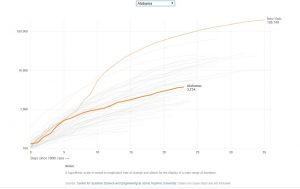 Since the order was issued, the rapid spread of the virus has begun to slow based on models by the Center for Systems Science and Engineering at Johns Hopkins University. In a graph by NPR, the curve in Alabama appears to be have reached a peak or will soon do so. In fact, State Health Officer Dr. Scott Harris said he expects to see the coronavirus peak in about a week, starting on April 20.

“At the moment, the numbers look as good as we have seen them. So, we are very encouraged by that,” Harris said.

The number of confirmed coronavirus cases in Alabama reached 3,803 on Tuesday morning. Confirmed deaths in the state moved to 62. There are 103 reported deaths and 28,656 tests conducted in Alabama with 457 hospitalizations statewide.

Harris’ optimistic predictions have now begun the discussion of reopening the state, which was a topic that Ivey introduced during the Tuesday press conference.

“In all honesty, we’ve been working on such a plan for several weeks,” Ivey said.

However, few details were revealed as Ivey said that her office is listening to recommendations for ways to kick-start the economic engine of the state. She added that she is working with Lt. Gov. Will Ainsworth on plans and recommendations for small businesses throughout Alabama with an update planned for Friday. In addition, state House lawmakers are tasked with introducing ideas for how best to reopen their cities be the end of April.

Ivey said the delegation, along with members of her Coronavirus Task Force, will give her and Harris recommendations in time for what she hopes will be the reopening of the state at the conclusion of the stay-at-home order, which is April 30.

“It has to be a reasoned process,” Ivey said. “So, it will be over time, segment by segment and region by region. Because, one size does not fit all … What restaurants and bars need to do is different than what a manufacturer or what a retail store needs to do. We want to get back to work as soon as we can but also as smart as we can.”