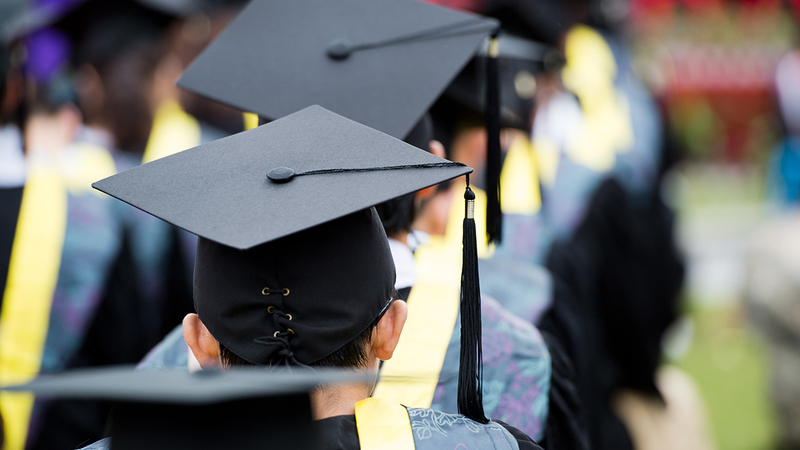 Posted By: Joshua Huffon: May 12, 2020In: Coronavirus Latest
Print Email

BIRMINGHAM, Ala. (AP) — The high school graduation season will present a test of Alabama’s ability to reopen society without hastening the spread of the new coronavirus as thousands gather for ceremonies at some of the state’s largest schools.

As many as 2,500 people will be allowed at a Tuesday evening commencement for nearly 550 graduates in the football stadium at Thompson High School, the Class 7A state high school football champion, in the Birmingham suburb of Alabaster, according to a school system announcement.

About 15 miles (25 kilometers) away, Spain Park and Hoover high schools, with 3,300 students combined, will hold ceremonies on Wednesday and Thursday at Hoover Metropolitan Stadium, with a normal seating capacity of 10,800 that must be halved under state pandemic rules.

Graduates from each school in Hoover will be given an N-95 face mask that they will be required to wear except when on stage, according to an announcement Tuesday. Others in attendance are encouraged, but not required, to wear masks.

“Everyone will be encouraged to immediately return to their vehicles at the conclusion of the ceremony without gathering on the field, in stands or in the parking lot,” said a message from the Hoover school system.

The ceremonies are allowed because the state last week eliminated rules that limited crowds to 10 people or fewer. Gatherings of any size are allowed now as long as people from different households stay at least 6 feet (1.8 meters) apart.

While administrators are making plans to spread out people and limit crowds because of COVID-19, the disease caused by the virus, deciding to fill football stadiums and other venues with people is a calculated risk during a global pandemic.

Eric Mackey, the state school superintendent, recommended to local systems that anyone attending a ceremony “exercise personal responsibility” by following guidelines that include wearing facial coverings and washing hands frequently.

“If they’re going to have to have a graduation ceremony they have to maintain the 6-foot rule,” he said.

Central High School in Phenix City broke up its usual graduation into five smaller ceremonies, according to al.com. Nearly 90 graduates walked in red robes Monday night, with another 400 graduates getting their diplomas over the next four days during similar ceremonies.

In Mobile County, which leads the state in coronavirus cases, graduates will be able to walk across a stage at Ladd-Peebles Stadium next month while relatives watch from inside a car. Videos of individuals will be combined with speeches by valedictorians and others to create a “virtual” graduation ceremony.

“None of would have ever imagined as you started your senior year in August that it would end like this,” Murphy High School Principal Joe Toomey said in an open letter to graduates posted on the school’s Facebook page.

Graduates of Dothan High School, with some 1,700 students, will receive their diplomas in a “drive-through” ceremony planned for June 6 on the grounds of the National Peanut Festival. Seniors will ride in with relatives but leave their vehicle briefly to walk across the stage when their name is called, according to guidance made public Tuesday. Area radio stations will broadcast the ceremony, which also will be shown by livestream.

Alabama’s average daily count of new cases of COVID-19 has been on an uptick since the state began loosening guidelines and allowing more businesses and other locations to open. More than 10,200 cases and at least 428 deaths from the disease have been confirmed statewide.

For most people, the coronavirus causes mild or moderate symptoms, such as fever and cough that clear up in two to three weeks. For some, especially older adults and people with existing health problems, it can cause more severe illness including pneumonia, and death.