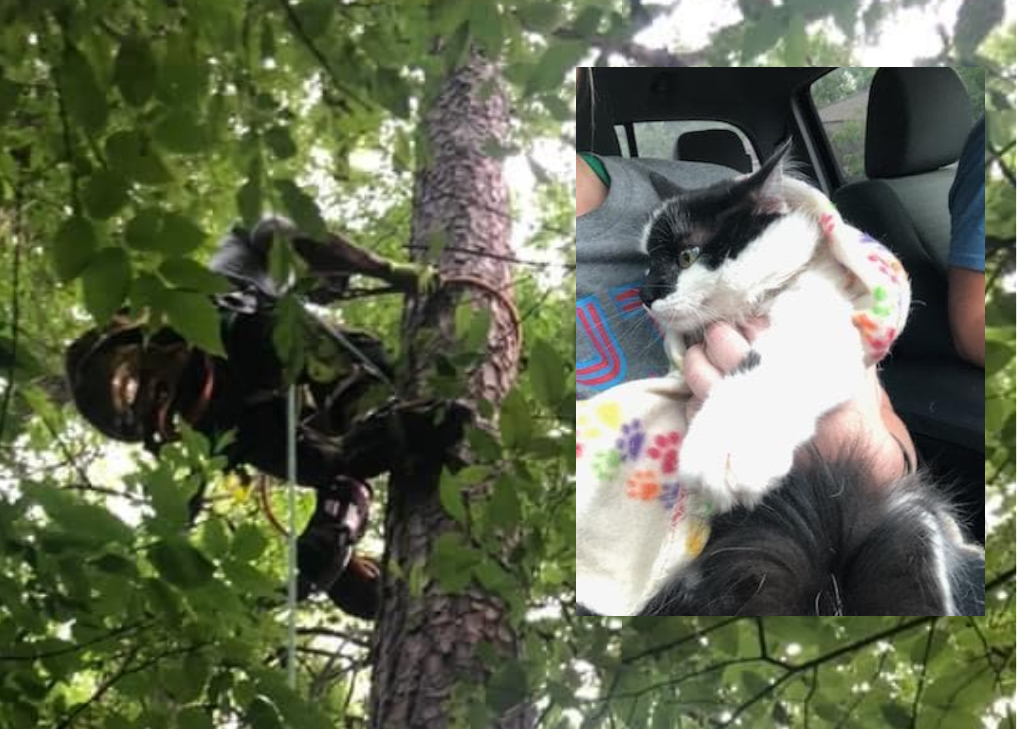 Treeline or Feline: The Tree Man saves the day in Clay

CLAY — A Clay woman and her furry friend had the purr-fect ending to a terrifying situation on Saturday, May  16, 2020. Chelsea Allen worked for hours to find a way to get her cat, Pearl, out of a tall pine tree. But no worries, this story ends with a fresh bowl of food and a snuggle inside a warm, cozy house.

Pearl is known for chasing chipmunks and squirrels in her backyard in the Eagle Ridge subdivision. She usually stays close by, only venturing as far as the next-door neighbor’s yard. She enjoys the great outdoors for a few hours and settles in at the end of the evening by meowing at the door to come inside. But Friday night was different. Pearl didn’t return home. Since that had happened before, Allen didn’t panic right away. But when she awoke Saturday morning to no meow at the door, she knew something was wrong. Allen said she was starting to worry when she saw a post on Facebook. 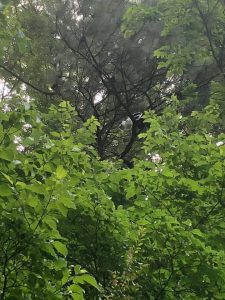 Pearl, the cat, made her way up a tall pine tree on Friday, May 15 and was rescued on Saturday, May 16. Photo: Chelsea Allen.

“Then in our neighborhood Facebook, a neighbor posted saying there was a black and white cat meowing behind a house,” Allen explained. “I went there and walked through the backyard. A man came up and said, ‘yeah, that cat has been up there yesterday meowing since lunch.”

When Allen realized Pearl had been in the pine tree for nearly 24 hours, she knew she had to act.

“She [Pearl] immediately sees me and starts meowing like crazy,” Allen remembered. “She was panicking.”

Allen immediately began to think of her options. She tried a ladder, but it wasn’t tall enough to reach the cat that was nearly 60 feet up in the tree. She said she knew she couldn’t call the fire department, so she took to Facebook asking for advice.

“A lady posted on the Facebook page with a screenshot saying a man called The Tree Man got her friend’s cat out of a tree,” said Allen.

With excitement, Allen picked up the phone.

“I immediately called him,” she said. “He immediately answered and said he was in a tree and would call as soon as he was done. Not 30 minutes later, he called back and said he would come to get her.”

Just hearing that help was on the way calmed Allen’s fears.

“It automatically calmed my heart because I was panicking,” she explained. 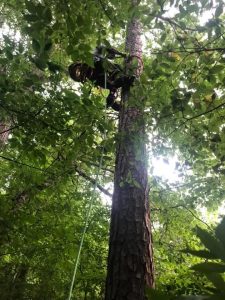 The Tree Man makes his way up a pine tree to rescue Pearl. Photo: Chelsea Allen.

Half an hour later, Pearl’s rescue arrived on the scene.

The Tree Man didn’t charge Allen for the emergency service, so she made him fresh brownies and gave him $50.

“The fact that it was a Saturday and he had already worked all day, it really meant a lot to me not only to get her safe but that another human cared that much,” Allen continued.

So, who is The Tree Man?

Donato Green is his name. He is from New York but has lived in Birmingham for a year now.

Green said Pearl wasn’t his first cat rescue call. In fact, he is beginning to garner quite the reputation among cat lovers in the Deep South.

“I need to change the name from The Tree Man to The Cat Man,” Green said. “I had another woman call me today, believe it or not.” 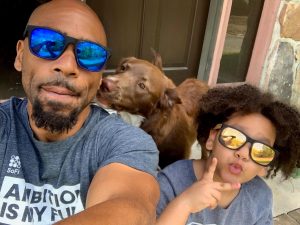 He said when he gets the call, he feels for the felines and their families and he helps out any way he can. As for Pearl, he said the job was an easy one.

“This cat was really, really nice,” said Green. “It came to me, it just tried to hold onto the tree and tried to climb over my back. That’s when I got a little nervous but I just held its arms until I could get it in the bag and it was good. I lowered it down and that was it.”

Bystanders described the rescue as quick and easy. One lady said it was as if the cat jumped into Green’s arms, so thankful for the rescue.

Green said he is in the business of helping others.

“It was my pleasure,” said Green. “I was so stoked when I could actually hold the cat. And then the owners, you can tell that these ladies are really, really close with their cats. They love their cats.” 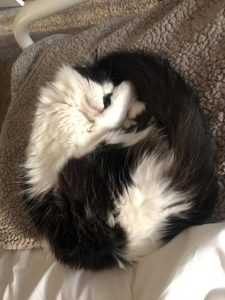 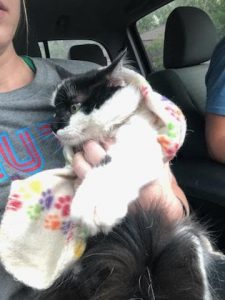 Pearl, the cat, happy to be back in her human’s arms. Photo: Chelsea Allen.

Although Green doesn’t charge for cat rescues, he said it’s rewarding to see reunions between cat moms and their kitties. Also, the brownies added a nice touch.

“They were delicious,” he said. “They were nice and soft and warm. They were fresh!”

Pearl is now snug as a bug in a rug in her home. Allen said she won’t be having any outdoor excursions anytime soon. 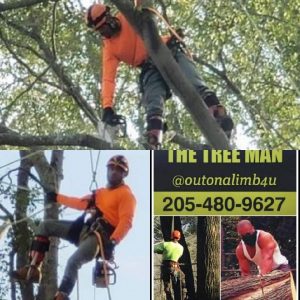