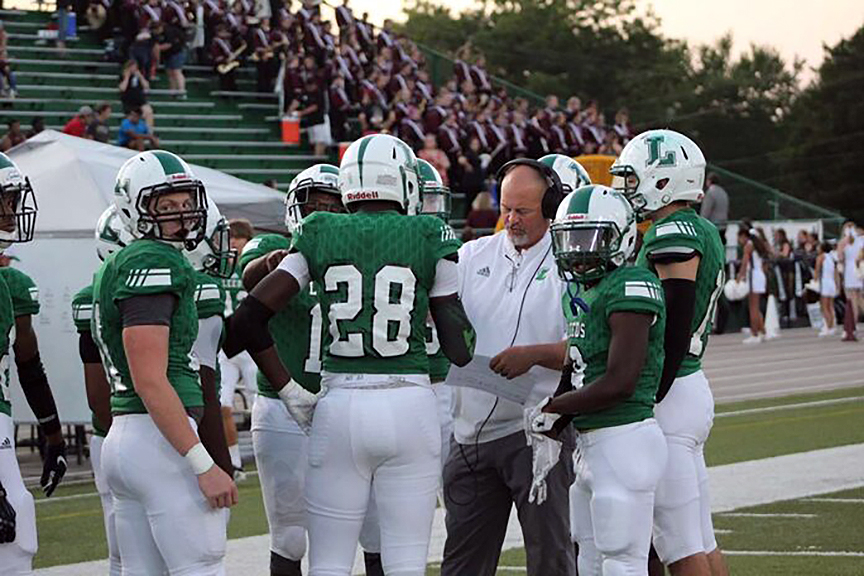 LEEDS – Historically, the second season for head coach Jerry Hood has proven to be a year of growth for whatever program the 2014 USA Today Alabama Coach of The Year has helmed, be it Oak Mountain or Clay-Chalkville.

Now, Hood has his eyes set on re-energizing a Leeds football team that concluded the 2019 season 2-8 and third-to-last in Class 4A, Region 4. 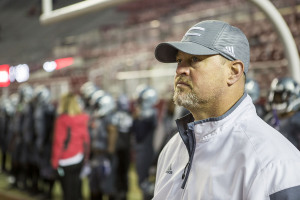 Hood admitted the early difficulties entrenching himself within a program that was just a few years removed from a highly successful run under former head coach Keith Etheredge. During Etheredge’s run, the Green Wave won four state championships and recorded 107 wins in 10 years. Etheredge stepped away in 2015 and was replaced by Lee Gibson, who guided the team from 2016-18 before stepping down and becoming Leeds’ system-wide athletic director.

During Gibson’s tenure, the Green Wave advanced into the second round of the playoffs once (2016) before a 3-7 season in 2018.

As with most programs, more goes on behind closed doors than is let on. For Leeds, that means despite a less than stellar record in 2019, the program has slowly inched its way back to a semblance of respectability within a student body that had known a few seasons of decline following multiple state championship runs in the past decade.

“The first day that I got here, we had 26 kids show up,” Hood said. “We went through the season and finished the year with about 50. We were adding them all throughout the year. I got here June of last year and, obviously, had not been in the school. So nobody knew me or anything like that. All they had known was some hard times. Once we got school started and I could be around the kids on a daily basis, we just made it our mission every single day to go recruit the kids in our hallways.”

Hood and his coaching staff’s hard work paid off as they added multiple two-sport players to a football team that will enter the 2020 season nearly intact following the departure of just four seniors. It should be noted that one of those departed seniors was 2019 all-state member Jakobi Hunter, who rushed for 1,084 yards on 142 attempts despite participating in just eight games.

Even with Hunter’s departure, the vibe around the program remains high despite the current coronavirus pandemic that has crippled coaches abilities throughout the nation to develop and nurture talent during the offseason. Hood and his staff have worked hard to make sure that his players remain in shape. They send the players an update each day and can only hope that they follow the plan.

“I don’t know how good, bad or whatever we’ll be because we haven’t seen them play football since last year,” Hood said. “But I do know that we have a lot more interest. I’m encouraged with that.”

That optimism will need to be on display come this August when the Green Wave suit up and take to the field as a Class 5A football team for the first time since 1989. Awaiting in the wings of Class 5A, Region 6 are several current heavyweight football programs with the likes of Alexandria, Center Point, Corner and Lincoln.

The jump from Class 4A to Class 5A does not concern Hood much, though. He has experienced Class 5A competition as an assistant coach in 2017 with Briarwood Christian. Hood admitted that he was more shocked at the level of talent in Class 4A than anything else.

“I had no idea about Class 4A,” Hood said. “I was really surprised at what a great job that coaches and kids do in Class 4A.”

Regardless of how next season turns out, the goal for Hood and his coaching staff remains the same: to provide the best opportunity for growth for the players and to give them lessons in life that can be applied down the road. However, Hood is still a football coach and he still strives to guide his players to be smarter, tougher and for them to improve overall.

“The encouragement that I took from last year is that those kids never quit, and we’ve doubled the size of our team throughout a year that we’re not winning,” Hood said. “The culture was good and the kids were saying good things. The kids were having a good experience. So, that gives me hope that we can continue to build on that.”