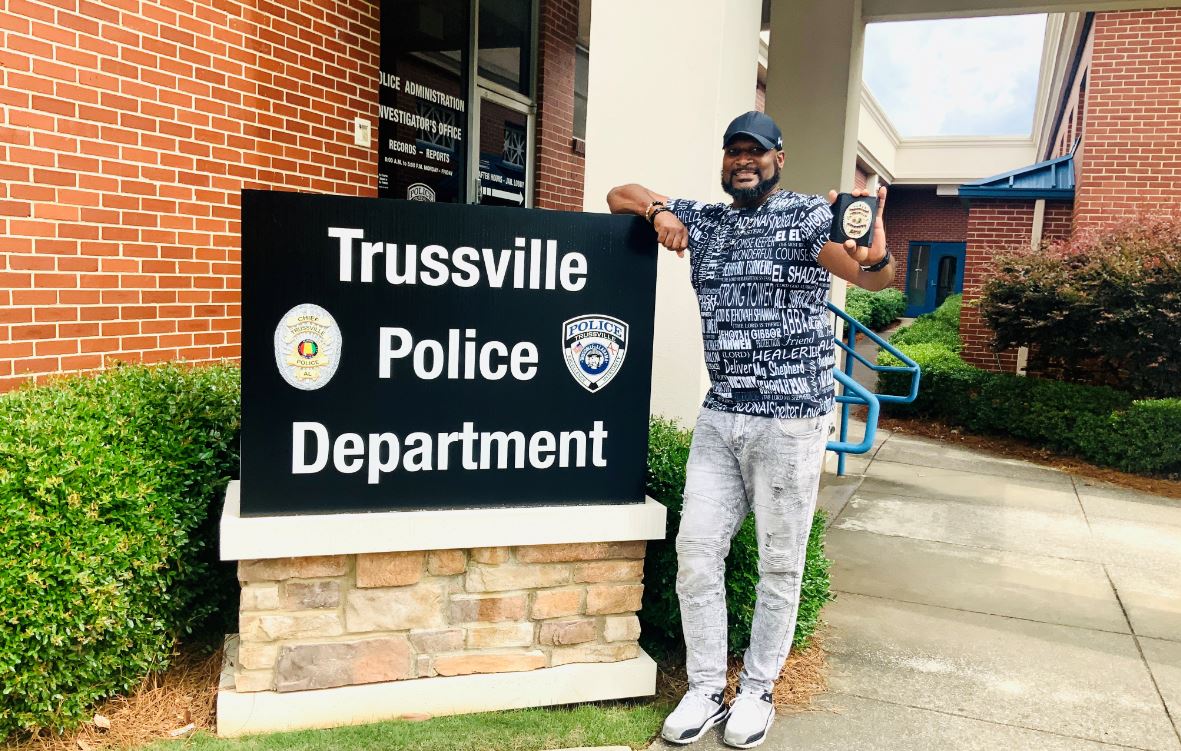 TRUSSVILLE — Nationwide, there is a push to raise awareness of disparities African Americans may face when encountering law enforcement. Following the death of George Floyd in Minnesota, many protests have been held across the country. Black Lives Matter and human rights groups continue to fight for equality and put an end to racial profiling and police brutality.

Bearing a unique perspective is Pastor Michael Edwards, of The Celebration Church, located in Roebuck.  Edwards serves as a chaplain for the Trussville Police Department. As an African American, he said he has recognized a need for change.

“Oftentimes, we are either profiled or looked at as a criminal,” Edwards explained. “If that’s the case, Officers must remember to protect and serve everyone, including criminals.”

In Trussville, Edwards believes the police department has it right. He has seen firsthand that officers in the city have a high level of respect for all citizens.

“Trussville Police Department, my hats off to them,” said Edwards. “As far as my personal experience, they do a phenomenal job. I think they are a great cast of officers that really take into consideration the ultimate job to protect and serve.”

In fact, over the past three years, the Trussville Police Department has had no official complaints of racial profiling.

“We do have a very mixed culture inside Trussville, so that speaks volumes to the training and the psychological level of the understanding of people,” Edwards said of the Trussville Police Department.

Community policing is a term many of us have heard over the past few years. The policing strategy focuses on the infusion of officers into neighborhoods and on the ground level. It has been shown to decrease crime and help solve crimes, according to the National Police Foundation. However, another positive side-effect of community policing is the improvement of public relations and understanding.

Edwards said that effort is evident in the city of Trussville.

“The Trussville Police Department knows the community it serves,” said Edwards. They are at the basketball and football games; they shop at stores and you’ll see them around the neighborhood. They come in their uniforms and they speak. They’re friendly.”

Edwards said he did a ride-along with a Trussville officer and witnessed for himself the officer handling a subject with grace and respect. Edwards said it was evident the woman was under the influence of a substance or was suffering from a mental condition. He recalled the officer being able to get a handle on the situation while exhibiting respect towards the woman. Edwards believes that is the kind of policing needed and said he thinks it is the key to the success of the Trussville Police Department.

Protecting and serving is what officers across the nation should focus on, according to Edwards. He believes if officers keep that goal at the forefront of their minds, they can make a difference.

“Then let the courts handle the judgment and sentencing,” said Edwards.

Accountability for law enforcement is important, according to Edwards. He believes that to achieve accountability, there need to be more policies in place to protect citizens. Edwards said there is a clear path to repairing some of the problems that exist.

“It can end when we hold people accountable,” he said. “We cannot change peoples’ viewpoints and thoughts but we can change actions or the amount of the actions that are happening by holding them accountable. To every action, there is a consequence.”

Edwards hopes the younger generation realizes the importance of voting to impact laws.

“Not just vote for a person, but vote for their policy,” he said. “Vote for their laws that they are pushing forward and holding people who are in authority accountable.”

While policy changes are needed, Edwards said he is thankful that many law enforcement agencies, including the Trussville Police Department, are wearing body cameras.

“Body cameras are very helpful,” he said. “And we have more people recording police interactions and that will keep officers accountable.”

When it comes to rioting, Edwards said each person wants to be heard. He believes that when anger and hurt are being exhibited by those who want change, it is likely a result of past experiences that have provided a negative connotation towards law enforcement.

“Just hearing the people out, engaging in conversation and finding out what can be done to make the situation better is the answer,” Edwards added. “And most of the time the police officer wants to do what the person wants to be done. We just have to have an understanding of each other and hear them.”

That understanding is also needed among community members, Edwards said. Having respect towards others, analyzing what they are saying and finding a common ground is important, even when differing opinions are in play.

For the younger generation, Edwards believes it is important to consider their actions and to take a moment and think about what they are doing before they act out in anger.

“Before you make decisions, make sure you are ready to face the consequences,” Edwards said. “I don’t want my son getting hurt, but I don’t want him to get run over either.”

As a faith leader, Pastor Edwards used Jesus’ death on the cross as an example of acceptance. Two criminals died beside Jesus.

“They asked if He would remember them when He got to His kingdom and He honored that,” Edwards explained. “If a criminal deserves a kingdom and God’s grace and God’s protection and God’s love, then who are we as children of God to not give that person the same level of love? Christ loves them just as much as He loves us. If we cannot get to that place, then we need to check ourselves and our hearts.”