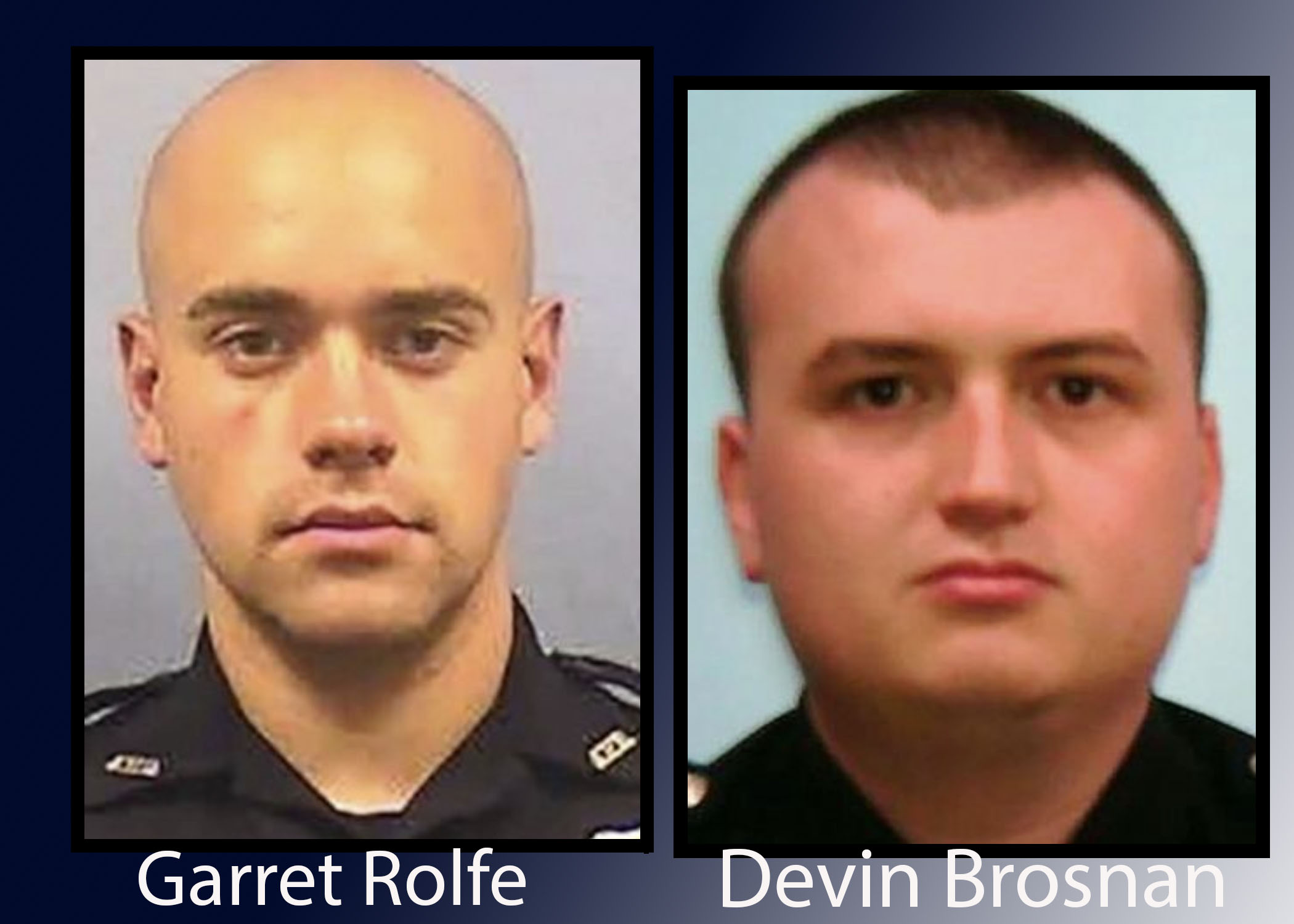 ATLANTA — Fulton County District Attorney Paul Howard announced Wednesday that the officer accused in the shooting death of an Atlanta man was charged with 11 crimes, including felony murder. Shortly after the announcement, the Georgia Bureau of Investigation replied saying its investigation was not yet complete and that the GBI was not made aware of charges against former officer Garrett Rolfe.

Rayshard Brooks was shot and killed in the parking lot of a Wendy’s after a struggle with police. Brooks, 27, was holding a stun gun he had snatched from officers, and he fired it at them during the clash.

“We’ve concluded at the time that Mr. Brooks was shot that he did not pose an immediate threat of death,” Howard said.

The felony murder charge against Rolfe, 27, carries life in prison or the death penalty if prosecutors decide to seek it. He was also charged with 10 other offenses punishable by decades behind bars.

A second officer, Devin Brosnan, 26, was charged with aggravated assault and violating his oath.

The district attorney said Brosnan is cooperating with prosecutors and will testify, saying it was the first time in 40 such cases in which an officer had come forward to do so. But an attorney for Brosnan emphatically denied he had agreed to be a prosecution witness and said he was not pleading guilty to anything.

“We are in the process of conducting this investigation,” the GBI said. “Although we have made significant progress in the case, we have not completed our work. Our goal in every officer-involved shooting case we are requested to review is to complete a thorough, impartial investigation before we submit the file to the respective District Attorney’s Office.

The GBI said it would continue to investigate thoroughly.

“The GBI was not aware of today’s press conference before it was conducted,” the statement continued. “We were not consulted on the charges filed by the District Attorney. Despite today’s occurrence, the GBI will complete its mission of completing an impartial and thorough investigation of this incident and we will submit the file, once completed, to the Fulton County District Attorney’s Office.”

The shooting of Brooks on Friday, June 12, sparked new demonstrations in Georgia’s capital against police brutality after occasionally turbulent protests over George Floyd’s death had largely died down in the area. Atlanta Police Chief Erika Shields resigned less than 24 hours after Brooks died, and the Wendy’s restaurant was burned.

Rolfe was fired after the shooting, while Brosnan was placed on desk duty.

Ahead of the district attorney’s announcement, Rolfe’s lawyers issued a statement saying the officer feared for his safety and that of others around him and was justified in shooting Brooks. Rolfe opened fire after hearing a sound “like a gunshot and saw a flash in front of him,” apparently from the stun gun.

“Mr. Brooks violently attacked two officers and disarmed one of them. When Mr. Brooks turned and pointed an object at Officer Rolfe, any officer would have reasonably believed that he intended to disarm, disable or seriously injure him,” the lawyers said.

But the district attorney said the stun gun that Brooks held had already been fired twice and was thus empty and no longer a threat.

Brosnan’s lawyer, Amanda Clark Palmer, said the charges against the officer were baseless. She said Brosnan stood on the wounded man’s hand, not his shoulder, for a short period of time — seconds — to make sure Brooks did not have a weapon.

Police had been called to the restaurant over complaints of a car blocking the drive-thru lane. An officer found Brooks asleep behind the wheel, and a breath test showed he was intoxicated.

Police body-camera video showed Brooks and officers having a relatively calm and respectful conversation — “almost jovial,” according to the district attorney — for more than 40 minutes before things rapidly turned violent when officers tried to handcuff him. Brooks wrestled with officers, grabbed one of their stun guns and fired it at one of them as he ran through the parking lot.

An autopsy found he was shot twice in the back. One shot pierced his heart, the district attorney said. At least one bullet went into a vehicle that was in line at the Wendy’s drive-thru.

The district attorney said Rolfe and Brosnan had until 6 p.m. Thursday to surrender. He said he would request $50,000 bond for Brosnan and no bail for Rolfe.