There will be a memorial service Friday, June 19 in the sanctuary of First Baptist Church Trussville at 10:30 AM to honor his life. 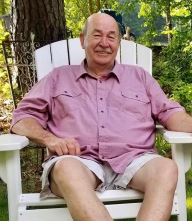 In the summer of 1998, Gary attended a prayer breakfast and heard the testimony of one of his heroes, Jeremiah Castille. After much prayer and soul searching, Gary made a public profession of faith in the good news of God’s gift of salvation through the death and resurrection of Jesus. In the years since that time, he grew in that faith by getting involved at First Baptist Church of Trussville and found great joy reading the word of God, fellowshipping with his Sunday School, and participating in a small group Bible Study. Gary would say with great confidence and humility that though his sin was great, God’s grace was greater.

Gary spent his last day on earth doing something he loved, tending to a beautiful garden. He was so pleased with how well it was doing! He loved coaching sports, following his grandchildren, and had a special love for fishing, golf, and Briarwood Christian School football.

Jesus said to her, “I am the resurrection and the life. Whoever believes in me, though he die, yet shall he live, and everyone who lives and believes in me shall never die. Do you believe this?” (John 11:25–26 ESV)

The family asks that donations be made in Gary’s honor to the First Responders Children’s Foundation (https://1strcf.org/) in lieu of flowers.