BIRMINGHAM — The Birmingham City Council will vote next Tuesday to rename a portion of Sixteenth Street North to Black Lives Matter Boulevard. 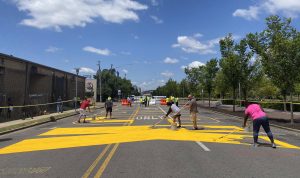 Photo courtesy of the City of Birmingham.

The resolution, which was submitted by Council President William Parker, seeks to rename the road that was the epicenter of the Civil Rights Movement and was the site of the church bombing that killed four children in an act of white supremacist terrorism, which occurred on Sunday, Sept. 15, 1963.

Outrage over the incident and the violent clash between protesters and police that followed helped draw national attention to the hard-fought, often-dangerous struggle for civil rights for African Americans.

“We want to show the world that Birmingham has been and will remain a beacon of hope in the ongoing fight for justice and equality in this country,” Parker said. “We have a huge community of activists here and we want to marry our past with the present movement by renaming a portion of this hallowed street.”

The resolution seeks to rename Sixteenth Street North from First Avenue North to Sixth Avenue North as a way to honor the BLM movement and join that with Birmingham’s history of civil rights activism.

This week, volunteers came together to inscribe “Black Lives Matter” on First Avenue South, next to Railroad Park.