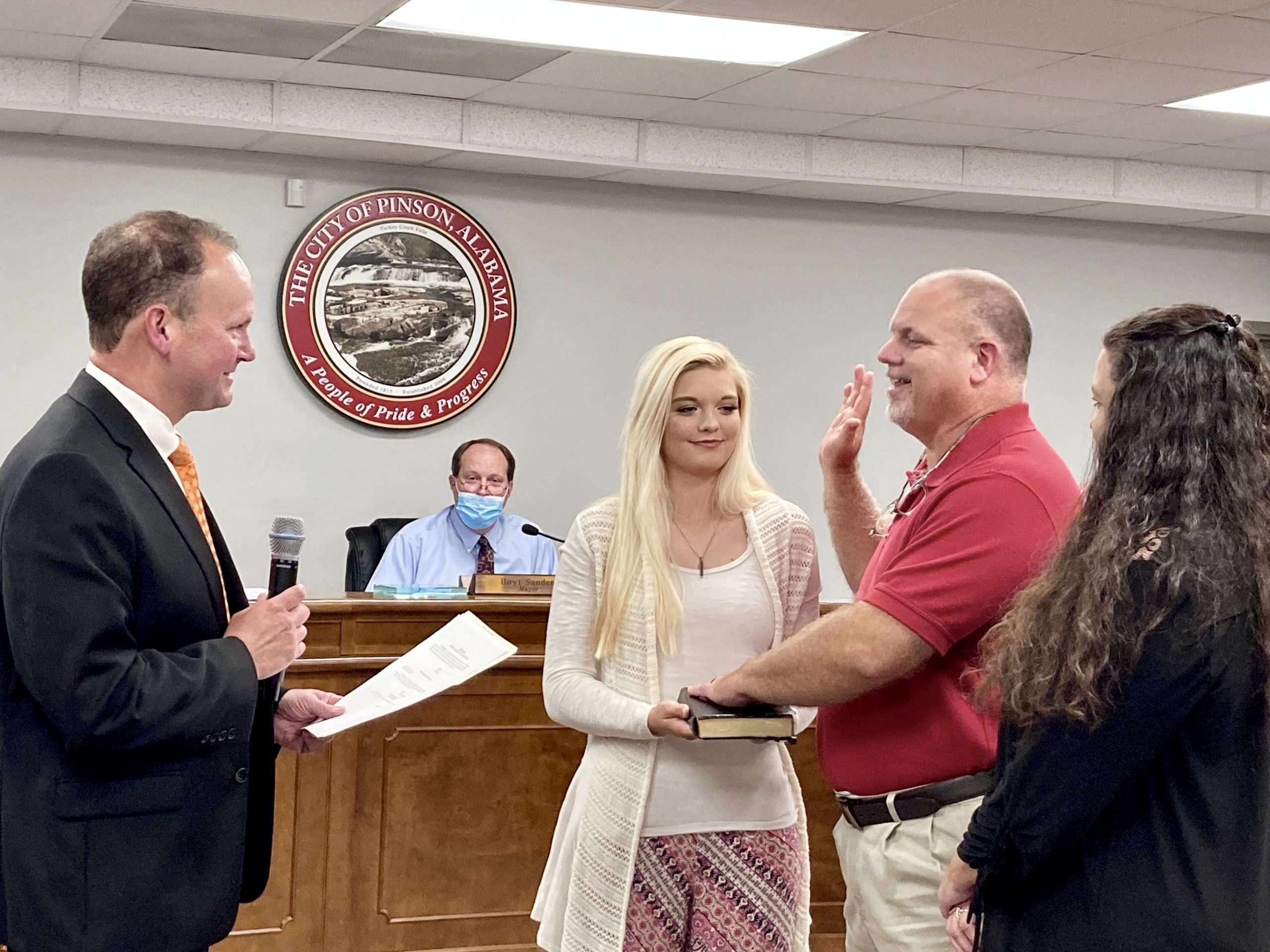 PINSON — The Pinson City Council swore in Michael Brad Walker to Place 2 on the council Thursday night, Aug. 6, 2020. Walker will be replacing former councilor Shannon Galamore, who stepped down from the council after accepting a teaching position in Egypt.

Walker was the only person to have filed a statement of candidacy for the office of City Councilor Place 2 for the upcoming election season. The current appointment will last through the end of October, and Walker will begin his new term on the city council the first Monday in November.

“I just want to say congratulations to Brad, because Brad has stuck it through for several years to get this position,” Councilor Dawn Tanner said.

“We appreciate you being willing to serve early,” Councilor Robbie Roberts added. “It will give you a little bit of a head start here on your elected term starting November, but we appreciate you coming on board now.”

Mayor Hoyt Sanders said that after Galamore tendered her resignation, the council was advised by city attorney Shane Black that the simplest option would be to appoint Walker since he was the only person who qualified for Place 2 in the 2020 election year.

“That made it easy because there was no opposition,” Sanders said. “So, welcome aboard.”

The council also unanimously passed four resolutions electing the city councilors that had no opposition for the 2020 election. The following persons were declared duly elected to their respective offices:

Pinson City Clerk Marie Turner was appointed under Resolution 20-35 to perform the duties for holding a municipal election as required by state law.

The municipal election will be held on Aug. 25, 2020. Councilor John Churchwell reminded the public that, for city elections, the Rock School Center is the only polling place. There will not be a polling place at the Palmerdale Methodist Church.

Under “Old Business,” the council unanimously approved Resolution 20-30, authorizing the mayor to enter into a contract for infrastructure installation as part of the Turkey Creek Nature Preserve pavilion project.

“The city has been a partner at Turkey Creek for years,” Mayor Sanders said. “The pavilion project is a fairly new project that Birmingham Southern (College) is undertaking and it has begun. Several months ago, the city pledged $25,000 for furnishings and $25,000 for the actual cost, and Birmingham Southern approached us – this is an immediate need to go ahead and have the water and the fire hydrant installed. That actually fits within our pledge, if you will, and budgeted amount.”

The resolution approved $21,000 in order to do a water tap and service, as well as installing a fire hydrant at the pavilion site.

The council also passed Ordinance 2020-15, authorizing an exchange of property between the city of Pinson and the Fresh Water Land Trust. The city will be trading 30 acres located at 3104 and 3108 Sweeney Hollow Road for approximately 30 acres of property at Turkey Creek Nature Preserve where the pavilion will be located.

According to the ordinance, the property the city is exchanging was declared surplus and not needed for municipal and public purposes.

“We discovered in talking about the pavilion project late last year, the Fresh Water Land Trust is really designed to own and preserve unimproved properties, meaning green space properties,” Sanders said. “The improved structure, which would include the pavilion, is really not their forte, but that is something that the city is well equipped to handle.

“As it turned out, … the city had just bought 30 acres in the bend of Sweeney Hollow where Tyler Loop comes in on the Pinson end, and as we discussed with the Land Trust at a meeting back earlier in the year, the discussion and idea was … why don’t we just simply swap? No money changes hands. They get 30 acres that will remain green space in perpetuity; we will acquire 30 odd acres with an approved pavilion, and then we would be able to ensure the property, ensure maintenance, and many other things. So what this does is allow the city to swap those two tracts of land.”

Other ordinances, resolutions and motions:

Councilor Dawn Tanner also offered for first mention a recommendation to consider purchasing disinfectant backpack mist blowers for the schools in Pinson, at an estimated $2,200 a piece, as well as social distancing decals for the schools, showing students where to stand to ensure that they stay 6 feet apart, for an estimated total of $1,800.

Before entering into an executive session to discuss trade and commerce, and litigation, Mayor Hoyt Sanders acknowledged city attorney Shane Black for receiving special recognition from the Alabama League of Municipalities for his work in municipal law.