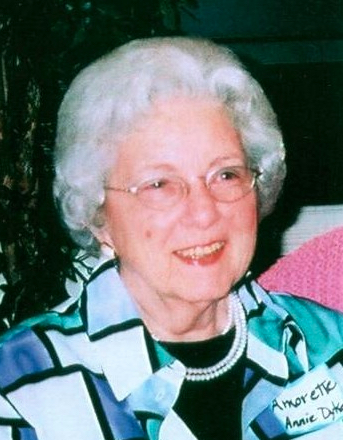 Amorette Dykes Reece, 98, formerly of Brewton, passed away on July 31, 2020 at her residence in Hoover, Alabama where she has lived since 2013.

Born July 3, 1922, she was the sixth of nine children born to Wilson H. and Annie Murphy Dykes.  A native of Andalusia, she was preceded in death by her parents, her son Tommy Reece, and seven siblings.

Ms. Reece was a graduate of the Class of 1940 of Andalusia High School where she was the class salutatorian.  Coming to Brewton in 1943, she was active in the First Assembly of God on Harold Street in East Brewton.

In the 1950s she was active in the founding of the Rock Hill Assembly of God on Ridge Road.  In both churches she served as pianist, Sunday School teacher, and prayer warrior.  In retirement she again served as a teacher in  First Assembly of God.

On November 1, 1951,  Ms. Reece began her career with the Escambia County Hospital on Douglas Avenue in Brewton as the bookkeeper. When the hospital moved to its present location as D. W. McMillan Memorial Hospital in 1954, she continued as bookkeeper and later as  head of the business department until her retirement in 1988.

In addition to her duties with the hospital, she worked closely with the treasurer of the Escambia County Hospital Authority, a part-time position which she held until 2001.  When she fully retired, Ms. Reece had completed fifty years of service to the hospital and the hospital authority of Escambia County.  She served under the leadership of hospital administrators Hart, Boone, O’Pry, Wickham, and Griffin.

The loves of Amorette Reece’s life were Jesus Christ and His church, her family, and the hospital.  She was a true Christian disciple, devoted mother, and loyal employee.  Hers was the heart of a servant, and she touched many lives for the good.