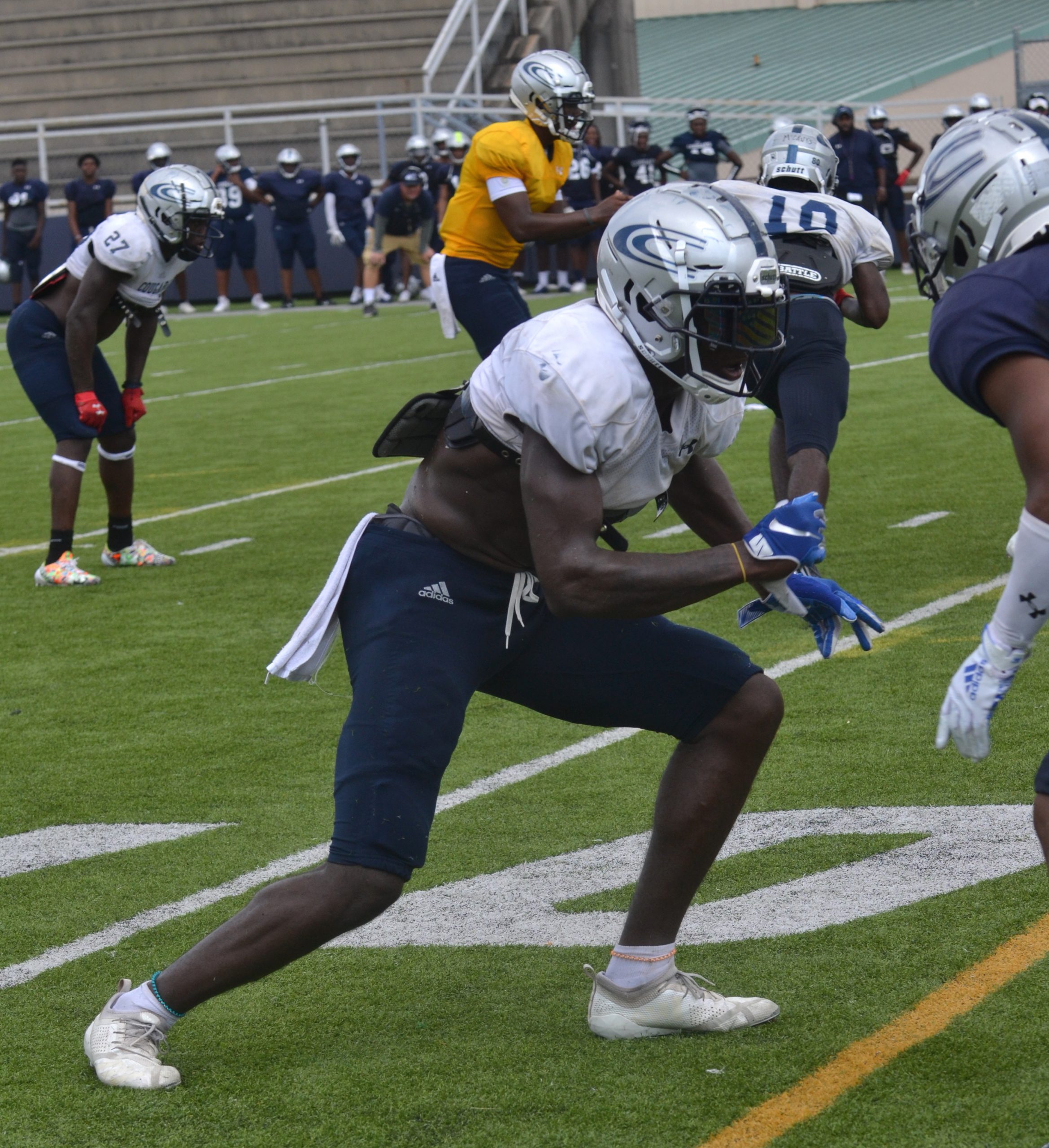 Clay-Chalkville wideout Antonio Miles fires off the line during an August scrimmage. Photo by Erik Harris

PINSON — The Clay-Chalkville Cougars enter their fourth season under the direction of head coach Drew Gilmer, who is coming off a 10-3 season that ended at the hands of eventual Class 6A state champion Oxford, 20-13.

Gilmer has led the team to postseason play in each of his three seasons as head coach, winning eight of his 11 playoff contests. The Cougars expect nothing less in 2020, as they transition to Region 6: Pinson Valley, Gardendale, Mortimer Jordan, Jasper, Minor and Jackson-Olin.

According to the Alabama Sports Writers Association (ASWA) preseason poll, the eighth-ranked Cougars join two other Region 6 members (No. 3 Pinson Valley and No. 10 Gardendale) in the Class 6A top 10.

It’s been four years since Clay-Chalkville’s last region title, and Gilmer hopes to hunt down another with the help of a ball control offense.

He has a deep group of wideouts that starts with rising junior Marquarius White and senior Antonio Miles.

“He’s a kid that started for us as a 10th-grader and this kid just has elite speed; he’s faster than anybody else on the field,” said Gilmer of White. “We just have to find ways to get the ball in his hands because he makes us look like better coaches.”

Miles, on the other hand, brings a more physical presence to the position. Gilmer says the senior is big enough to attach at tight end and fast enough to create big plays down field.

With the graduation of quarterback Damione Ward, Clay-Chalkville will look to junior Khalib Johnson under center. The 6-foot-2 righty is expected to take the starting snaps when the Cougars visit Shades Valley on Aug. 21.

“Khalib is a little more athletic and can move around, but he’s also got a big arm,” said Gilmer. “He has a chance to be big-time. The sky is the limit.”

He will be joined in the backfield by at least two experienced ball carriers. Rising juniors Edward Osley and Lazarius Hinkle both earned starting reps last fall, and should provide a capable one-two punch for the offense.

“Osley has really come along,” said Gilmer. “He just looks dynamic and the thing with him is he’s so versatile: we can spread him out wide, he can play receiver, we can put him in the backfield and he can be the featured back, he can be the fullback.”

“Hinkle is just a freaking bulldozer,” said Gilmer. “He doesn’t have a lot of wiggle, but you just get tired of tackling him.”

The group up front won’t be the biggest in the region, but what it lacks in size is made up for in athleticism. Senior center Izziah Williams, a first-team All-Tribune performer last season, has stepped into a leadership role. He will be joined across the line by guards Ahmante Altman and Kyrell Wiggins, and tackles Xavier Norman and Fred Samuel. Also expect Corey Calvin to work into the rotation.

Defensively, Clay-Chalkville will implement an aggressive game plan from coordinator Matt Glover, who like the offensive staff, will be working with a less-than-massive front line in 2020.

“We’re going to be a very athletic group that can run and do a lot of things that can cause some havoc and create some negative plays by creating some vertical penetration,” said Gilmer.

The Cougars will ask a lot of an experienced secondary that includes Kameron Peterson, Lamar Croskey and Center Point transfer Robert Blanco. Returning middle linebacker Jonathan Harris will be responsible for making the calls.

He and the Cougars open up at Shades Valley on Aug. 21.