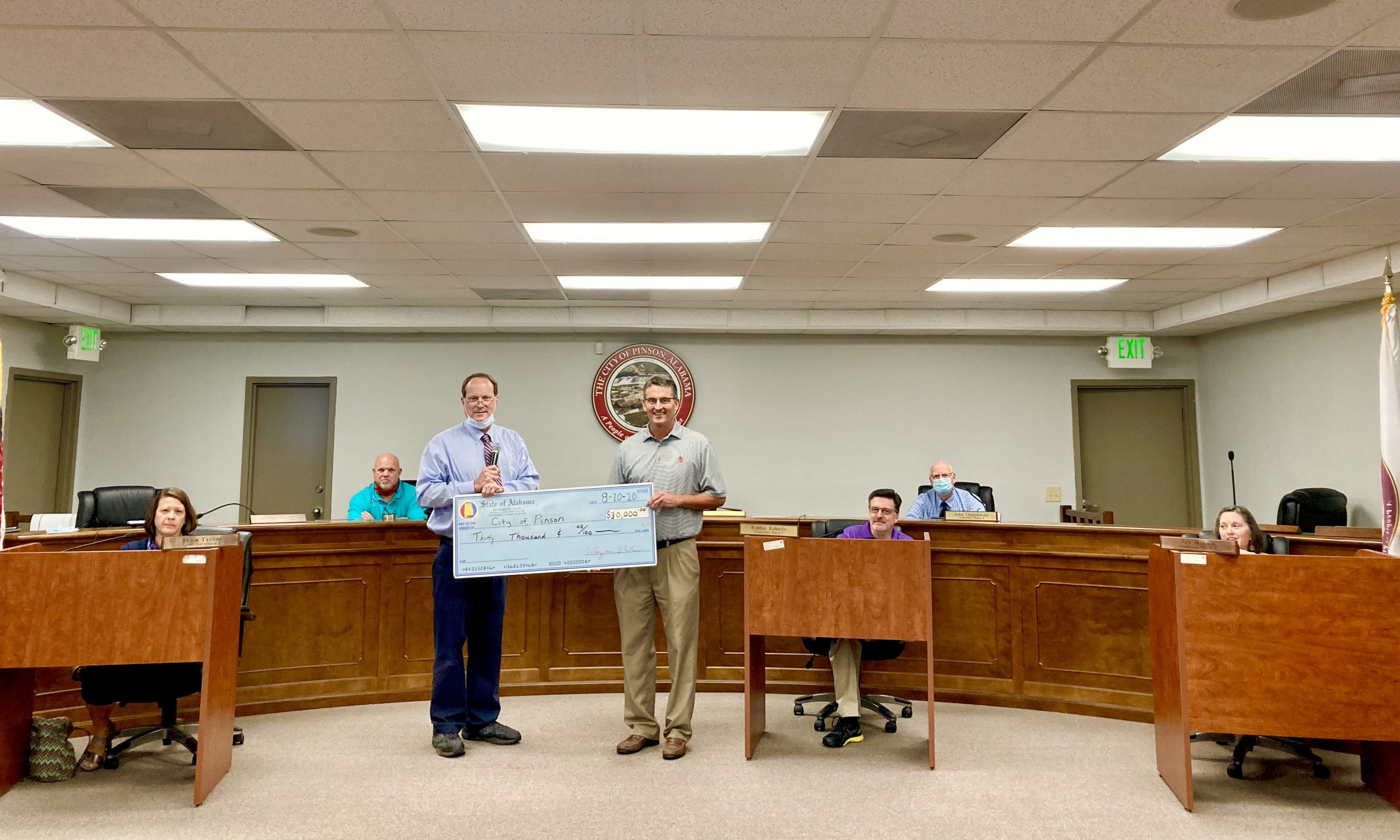 “It’s good to be here,” Shelnutt said. “I’m here representing your legislators, Danny Garrett, Allen Treadaway and myself, Shay Shelnutt. I want to thank Hoyt Sanders for working with his legislators to secure some money for Pinson, for the Turkey Creek construction and police protection, I understand, and maybe some Covid personal protection equipment relief. So I’ve got a check — it’s always good to bring money. This is from all your legislators.”

Mayor Hoyt Sanders said that the money is designated to be used for public safety and construction at Turkey Creek Nature Preserve on the new pavilion.

“The legislators are always good to reach out to me,” Sanders said. “Allen and Danny and Shay reached out a couple months ago … and they are providing some money for the pavilion, itself, as well as Shay’s, I think, is designated for public safety, so that will help fund our extra police protection at the Bicentennial (Park) and Turkey Creek over the weekend. I think Danny’s and Allen’s are designated for construction for Park & Rec., but nonetheless, we will absolutely make use of it.”

Sanders also called to attention a letter that the city received from Jefferson County Schools Superintendent Walter B. Gonsoulin Jr., Ph.D., commending the mayor and city council for their service, support and investments in the city’s schools.

The letter states that “The Jefferson County School District is proud to serve with the city government of Pinson. The level of commitment and partnership that the city leadership and families of Pinson have provided to the Jefferson County School Board has proven to be beneficial for the entire community. The amount of support that you have provided has been second to none. Because of your efforts and sincere care for the schools in your community, each of our schools have benefited in and outside of the classroom.”

The letter specifically mentions the city providing lawn care for several schools, the installation of a signal light in front of Pinson Valley High School, which cost over $100,000, and the donation of several thousand dollars to schools throughout the feeder pattern.

“I want you to know that the example you have set is a perfect model for how school and community relationships can assist student achievement in and out of the classroom,” Gonsoulin said in the letter. “I stand firm that the city government in Pinson is a shining example of leadership that cares for its citizens.”

Councilor Dawn Tanner offered a motion before the council to purchase five backpack-style sanitizing dispensers for the city’s schools for the amount of $11,000.

“I had brought up at the last council meeting some needs that the high school needed, but I wanted to check with Rudd, Pinson Elementary and Johnson,” Tanner said. “These are those backpack misters that the janitors can wear, spraying the classrooms and all that. … This is something that they can use also just for flu season, in general.”

The motion to purchase the sanitizing dispensers passed unanimously.

Tanner also offered a motion to purchase social distancing decals for the city’s schools for the amount of $7,600. That motion also passed unanimously.

Sanders said that after receiving refunds from FEMA for the storm shelter and an unexpected check from financial institution proceeds, the city has replenished it’s saving account to where it was prior to the Rock School and storm shelter projects.

“We are holding very, very strong, even in these difficult times,” he said.

Ronnie Dixon and several members of the Clay-Pinson Chamber of Commerce attended the Pinson City Council meeting to discuss options for this year’s Alabama Butter Bean Festival. Dixon said that three options were being discussed in consideration of Covid-19 and social distancing. The first option is to continue with the 15th annual ABBF, as planned, with social distancing regulations enforced. The second option would be to only have a carnival, entertainment and fireworks at Triangle Park on Friday night. The third option would be to do fireworks only, Friday night, with people watching the fireworks from their cars.

“We (the chamber) had a good discussion,” Dixon said. “Sandy (Ragland) … and Bo Johnson, the two pastors that are on our board, indicated to us that people were just starving to get out and return to some form of normalcy. … So the vote of the board was that we proceed with the normal, 15th annual Butter Bean Festival.”

Councilor Robbie Roberts had concerns about moving forward with the festival, and presented information about other festivals in the state that have been canceled due to Covid-19.

“I’ve been concerned about this, Ronnie,” Roberts said. “I’ve been appreciating the fact that we would delay in order to see if things might get better, but I was just reading in the paper this morning about several festivals having closed or are canceling. … It seems to be the trend to cancel now. … I don’t know. I’m very nervous about the idea of bringing in all of the people regionally, having them around here. It’s almost impossible to properly distance. … I’m very concerned about us trying to pull it off.”

Councilors Dawn Tanner, Brad Walker and John Churchwell all said that they agree with the chamber about people being desperate to get out and return to some form of normalcy, and that they fully support whatever the chamber decides.

“I do think there’s a problem with not enough events going on for people to get out,” Tanner said. “We’ve already seen in the paper last week, there’s an overdose problem in two of our sister cities. I think we need to try and get back some normalcy that we can, whether it’s reduced or whatever.”

“I agree with Dawn,” Walker said, in what was his first official meeting as a Pinson city council member. “We have an opportunity here … we can be the success story or we can be the shame story. So, it’s a risk one way and it’s a bonus in the other direction. I do believe, everybody I talked to, they’re ready to get out and do something. They’re tired of being at home.”

John Churchwell added that there was a lengthy discussion at the Chamber of Commerce meeting where all options were considered.

“After all that discussion, somebody made the statement to go full speed ahead with everything … that’s what I think we should do,” Churchwell said. “People are wanting and needing something.”

No decision was finalized, but after much discussion, the majority of the council and chamber members agreed to tentatively move forward with plans to hold the festival, as usual, pending the acquisition of more information.