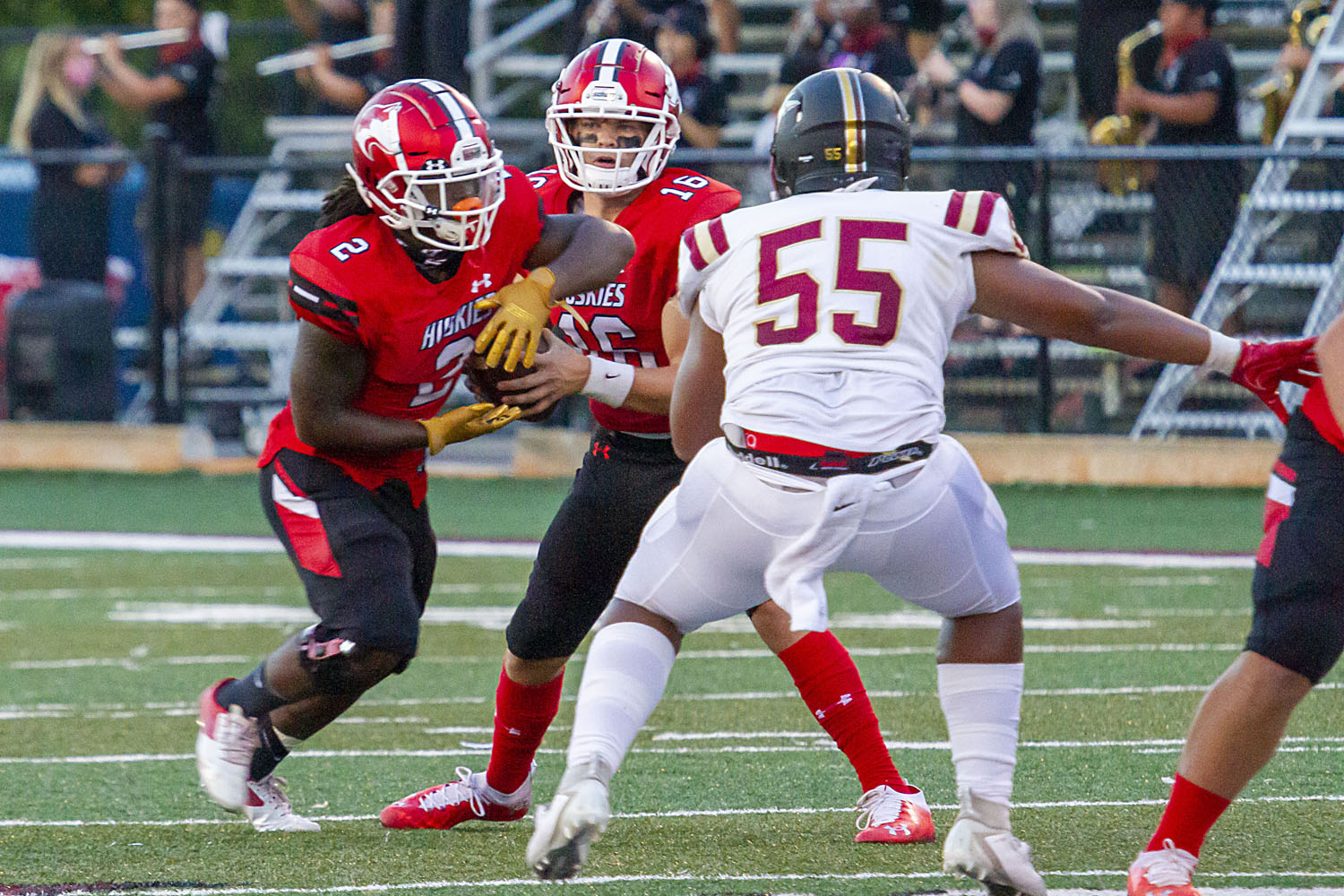 PINSON — When Josh Floyd walked out onto the field for the first time Friday afternoon, he made sure to show his star running back, Armoni Goodwin, where the goal line was in Willie Adams Stadium.

“I just wanted to make sure he (Goodwin) didn’t forget where it was,” said the Hewitt-Trussville head coach following his team’s season-opening road win over Pinson Valley.

Goodwin, who missed all but the first three games of the 2019 season with an injury, ran wild in his return. The Auburn commit went for 170 yards and three scores on 19 carries, as his 7A Huskies blew by 6A Pinson Valley 44-19 on Friday night in a battle of third-ranked teams.

“We’re obviously excited about our backfield,” said Floyd. “Sean Jackson is a big-time player, and everybody knows about the explosiveness that Armoni brings to the table, and I’m just really proud of both those guys.”

Goodwin’s burst was obvious to all in attendance throughout the fourth quarter. After returning from a 40-minute lightning delay that sent players and coaches into the locker room at the 2:59 mark of the third quarter, Goodwin popped off back-to-back touchdown scampers to put the game out of reach in the fourth frame.

“I felt like we were able to wear them down a little bit as the game wore on,” said Floyd.

The final score of the night—a 3-yard plunge from Hewitt-Trussville senior Sean Jackson—was preceded by a Michael Edwards interception return to the Indians 3-yard line.

The Huskies (1-0) picked off first-year Pinson Valley quarterback Zach Pyron four times thanks in part to an active pass rush.

“We try every week to make the quarterback uncomfortable,” said Floyd. “We’re going to play some really good quarterbacks this year. Our first game is against Spain Park and they’ve got a big-time quarterback.”

Floyd was impressed with the toughness Pyron showed. The Pinson Valley righty played his previous two high school season for Class 2A Fyffe, winning 30 straight games as a starter.

“He’s a tough kid,” said Floyd. “He’s going to have a big year. We obviously tried to hit him, but he’s a big, tough kid, hard runner and made a lot of good throws. We were just able to get some pressure on him while they were playing from behind.”

Pyron went 16 for 29 with 180 yards passing and three scores for the Indians (0-1). Two of his touchdowns went to Ga’Quincy “Kool-Aid” McKinstry and the other went to Jaquel Fells. McKinstry pulled down nine receptions for 95 yards.

On the ground, Pinson Valley went to Kenji Christian 12 times for 100 yards in the loss.

The Indians scored first on a 4-yard pitch-and-catch from Pyron to Fells, capping a five-play opening drive. Pinson Valley would lead once more early in the second when Pyron scrambled away from pressure and ripped a 40-yard pass to McKinstry in the end zone for a 13-7 advantage.

That would, however, be their final lead of the game, as Hewitt-Trussville scored 23 unanswered.

Junior righty Cade Ott Carruth took the majority of Hewitt-Trussville’s snaps, although Jackson Holland provided the occasional change of pace. Carruth connected on nine of his 17 attempts for 142 yards and two touchdowns.

His first two completions went to Jackson, the second of which resulted in a 25-yard touchdown that gave the Huskies their first lead at 7-6. Jackson finished with three grabs for 60 yards to go with another 44 yards rushing and two scores.

Carruth put the visitors ahead for good late in the first half with a 37-yard toss to a wide open Cayson Zackery.