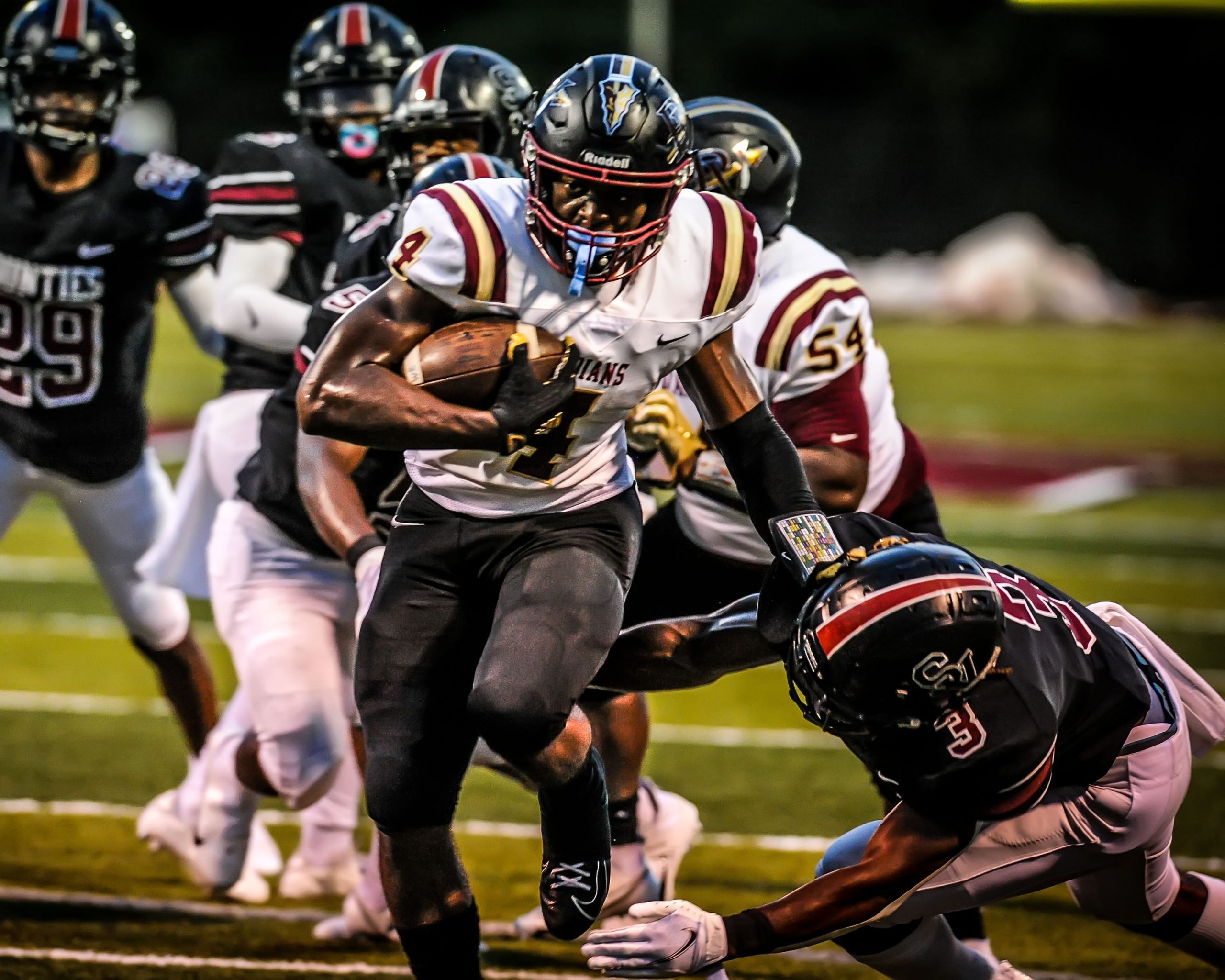 Pinson Valley running back Michael Sharpe Jr. runs into the end zone during a road game in Irondale on Aug. 28, 2020. Photo by Vickie Unlap (fodaction.com)

No. 6 Indians rally back at Shades Valley

IRONDALE — Pinson Valley overcame some adversity on Friday night in Irondale to secure win No. 1 of the Sam Shade era.

On a night that saw highly touted receiver Qa’Quincy “Kool-Aid” McKinstry catch only two passes, the Indians (1-1) climbed back from a second-half deficit to knock off Shades Valley (0-2) 31-21 in Frank A. Nix Memorial Athletic Complex.

After turning the ball over three times in the first half, Pinson Valley cleaned up some offensive issues to punch in a trio of touchdowns in the final 13 minutes of play.

Junior quarterback Zach Pyron went to McKinstry for the go-ahead score — a 56-yard catch-and-run down the right side — with 45 seconds remaining in the third quarter. McKinstry took advantage of some loose coverage, pulling in a short grab and bolting down the home sideline for a 17-14 advantage — the Tribe’s first lead since midway through the second quarter.

McKinstry finished with only two grabs, resulting in 83 yards and the score. Shade credits the limited touches to a solid Shades Valley game plan.

“They were kind of doubling him (McKinstry) all night, they had a safety over the top or they had a linebacker come underneath and help the corner, so they did some things to stop us from getting the ball to him,” said Shade. 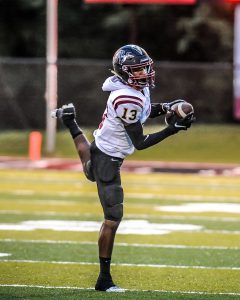 Pinson Valley receiver Devin Kelly pulls in a reception during a 31-21 road win over Shades Valley on Aug. 28, 2020.
Photo by Vickie Unlap (fodaction.com).

The Indians stretched their lead to 24-14 with a timely 29-yard touchdown strike from Pyron to Devin Kelly with 5:19 remaining. The junior righty scrambled away from pressure and fired across the field to convert a fourth-and-long and put the game likely out of reach.

Pyron finished with 268 yards passing to go with two touchdowns and an interception.

Pinson Valley defensive back Jacari Wedgeworth turned the Mounties over with an interception on the ensuing drive, and his offense capitalized on the field position.

Senior running back Kenji Christian, who committed to Virginia Tech earlier in the week, took the first snap 23 yards to the end zone. His quick strike put the Tribe out front 31-14 late in the fourth. He would go home with 89 yards rushing on 11 carries.

It was the home team, however, that controlled things early. Shades Valley found success with its triple option attack, pushing in a pair of early scores that gave them a 14-10 advantage in the second quarter.

That lead would hold until McKinstry’s long touchdown reception late in the third.

Mounties’ running back Davin Bostock powered home the first score of the night from five yards out. Quarterback Earl Woods later floated a 77-yard cross into the hands of Kailen Alexander for a 14-10 lead at the half.

That would be Shades Valley’s final score until late in the fourth when Bostock plowed in from the goal line.

“We had to get used to the speed of their option offense early on because it’s so hard to simulate in practice,” said Shade. “But once we kind of got used to the speed of it and our guys started to step up and fit things the way that we’re suppose to fit them, we were able to stop some things in the second half.”

Michael Sharpe Jr. saw plenty of action in the first half, tying the game at 7-7 with a 12-yard touchdown run late in the first quarter. His one-cut scamper capped an eight-play drive that saw a mix of five rushes and three passes.

Indians’ kicker Damian Gonzalez sent home a 22-yard attempt for his team’s only advantage of the first half at 10-7.

Pinson Valley will step into Class 6A, Region 6 play next Friday when No. 9 Gardendale comes to Willie Adams Stadium.