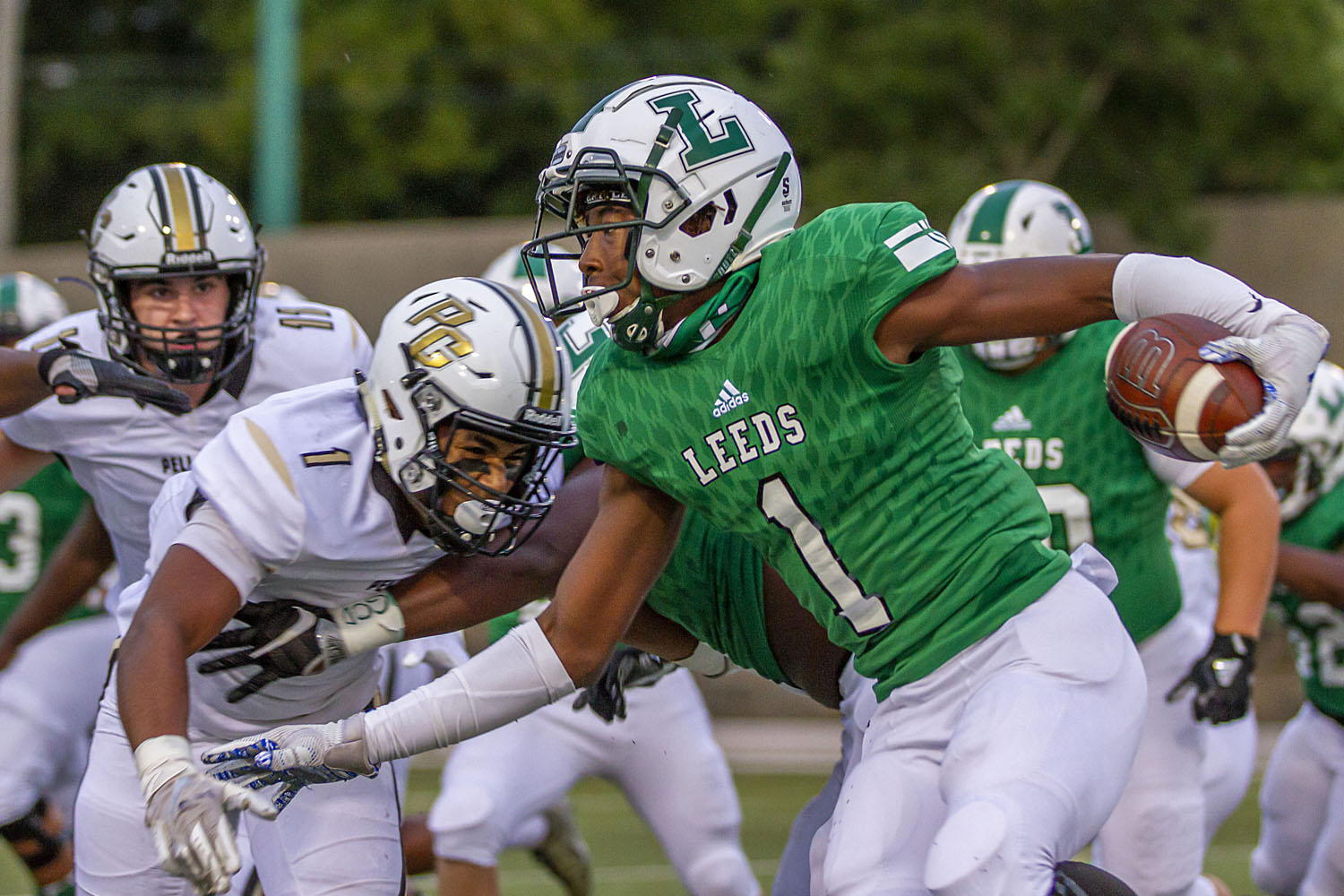 LEEDS — In a battle of I-20, the first half was reminiscent of the good old days of defensive football. The second half, however, provided more offensive fire power and a drama-filled ending for the second week in a row for Jerry Hood’s Green Wave. This time, his team would come out on top in a 20-17 victory over Pell City.

Leeds punter Daniel Hood set up the opening score, booming a coffin-corner style kick that would put the Pell City Panthers at their own 4-yard line. On the first offensive play from scrimmage, Pell City put the ball on the ground and Christian Douglas pounced on the fumble for the first touchdown of the game.

Pell City struck back at the end of the first with a 35-yard Saylor Richard field goal that closed the gap to 6-3.

Leeds senior Cameron Dunklin came off the edge to blocked Richard’s next attempt in the second frame.

The half finished with more stiff defense and very little offense as both teams headed to the locker room with under 100 yards of total offense on either side.

In the second half, Leeds would take advantage of a Pell City muffed punt. On a third and 2 from the 30, Jeremiah Hunter took a handoff from Latta and busted up the middle for 30 yards and a Green Wave touchdown to widen the gap to 13-3 with 2:45 left in the third (Arthur PAT was good).

Pell City had the ball to begin the fourth quarter and drove the ball down to the 1-yard line where quarterback Baylor Smith would call his own number and punch it in on a quarterback sneak from under center. The Richard PAT was good, and the gap was closed to just 3 points with the home team up 13-10 with 8:16 left in the game.

Following a defensive stop, Leeds head coach Jerry Hood and staff decided to pound the ball with Rametrius Yelverton. On the drive, Yelverton had 46 of the 50 yards it took before giving way to Joshua Ruff who ran it in from four yards out. With the PAT, Leeds was now up 20-10 with 1:43 to go.

Pell City would swing back, as the ensuing kickoff was returned 98 yards by Carson Walker, shocking the home crowd and closing the gap once again to a 3-point deficit with 1:30 left in the game.

“I was disappointed about the kickoff. That was bad discipline right there. It was a great return,” said Hood. After recovering an onside kick attempt, content with a 20-17 victory, Hood instructed his quarterback to take a knee on consecutive plays and get out of the game with the win.

When asked about how he felt about this game, Coach Jerry Hood said, “All the things we do are about being tough. Finishing. Everything is important. When we got the ball there late, we just said ‘run it right at them. Let’s run it, block them and see what happens.’ We got them sucked in really good and got down to the 4 and I thought we would give it to our best player and let him run right and he scored.”

“(The defensive effort) was unbelievable. Eddie Wall and his staff did an unbelievable job tonight. They actually got a touchdown. They are the heroes tonight,” said Hood of his defense and defensive staff.

“When you’re trying to build a program and learn how to win. I just challenged them. I said ‘are you really going to be the same old people or are you going to take it and win. Which one are you?’ So, they came out and you saw their effort.”

Leeds moves to 1-1 and hosts Lincoln next week while Pell City drops to 0-1 on the season and travels to Southside (Gadsden) next week.