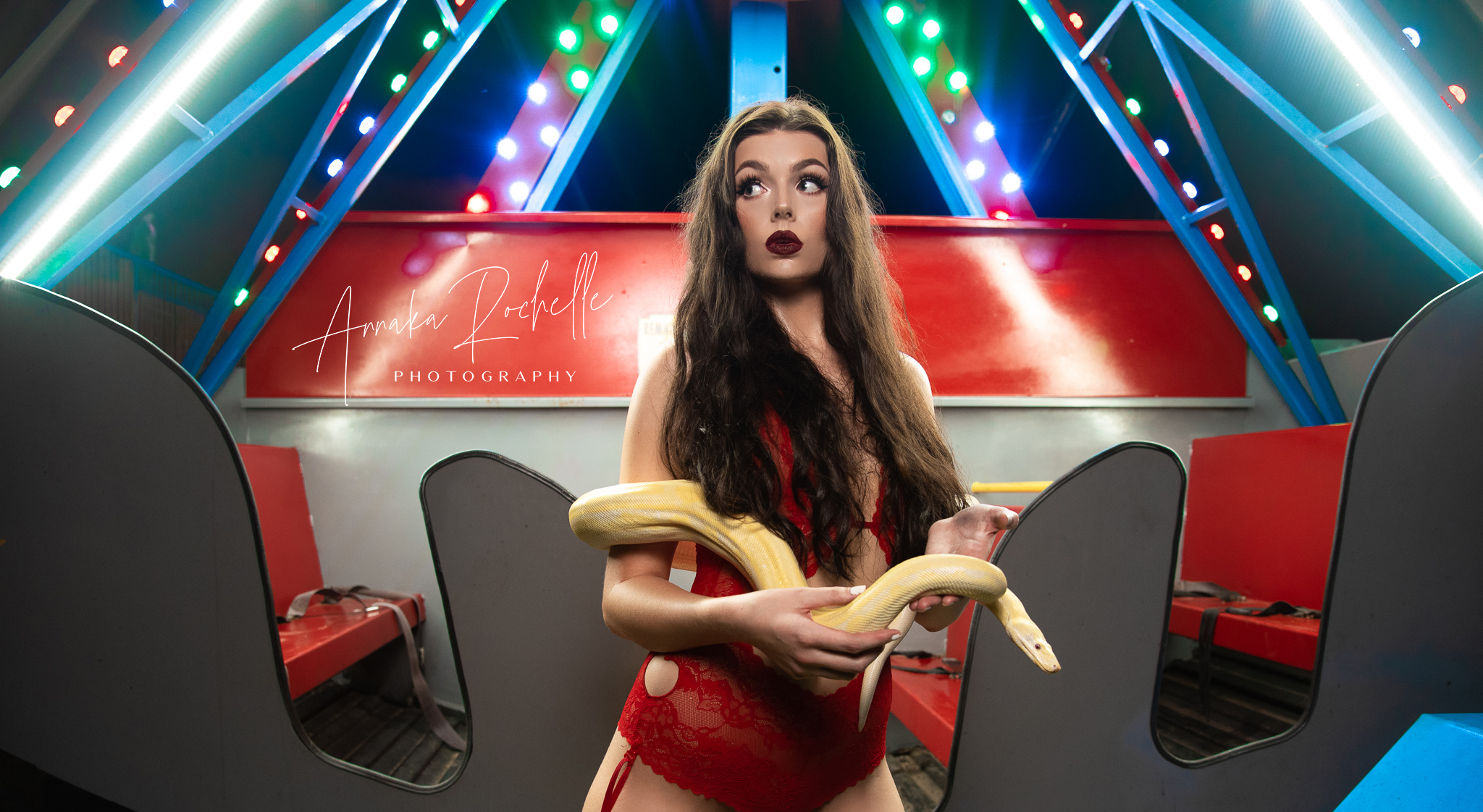 CLAY — The professional photographer who conducted a photo shoot ahead of the opening of a carnival in Clay is speaking out after public photos and news articles made the rounds, giving her positive purpose a negative light.

Annaka Rochelle Burg, the owner of Annaka Rochelle Photography, said she is ready to set the story straight about the real reason she was taking photos of models in lingerie.

It all started when Burg saw carnival equipment in Eastaboga, in early August. The equipment was owned and operated by C&M Southern Midways.

“I had to pay for that particular photo shoot,” Burg said. “They charged me $200 to come onto the property and use some of their equipment to do a photo shoot with. When I did that, they asked for recognition because the carnival industry is suffering.”

Burg said after she posted the photos online, the owner of C&M Southern Midways called her and said he was impressed by the quality of the images. She said he put her in touch with a carnival ride manufacturing company that was interested in making a calendar. After speaking with the manufacturer, Burg said they decided to collaborate on making the calendar using models in lingerie. The original photo shoot was going to be at the C&M Southern Midways carnival in Heflin but it had to be pushed back, so the backdrop was changed to the carnival in Clay. Burg was able to quickly change plans and bring in professional models from all over the southeast.

“We had people from four states coming together for this photo shoot,” said Burg. “A lot of planning went into it.” 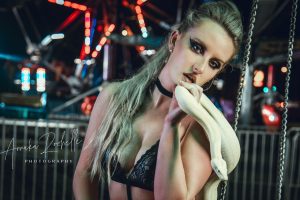 There were several reasons Burg felt the calendar could help others. It could bring awareness to a struggling carnival industry, promote the empowerment of women and raise awareness of laws that would impact reptile education. Burg went as far as contacting a non-profit organization to bring in snakes from Florida.

The photo shoot took place the night before the carnival opened to the public. The group took photos from 6:30 p.m. until 9:30 p.m. As they were wrapping up, one of the carnival workers told Burg that people driving by were complaining about the display. The group packed up and left and Burg said she never spoke to anyone from the city of Clay, although the city said they shut down the photo shoot as soon as they found out about it.

“Nobody came to shut us down, nobody showed up, there was no public there,” said Burg.

Charles Haisch, the owner of C&M Southern Midways confirmed he did meet Burg in Eastaboga, but said he was not involved in the production of a calendar. 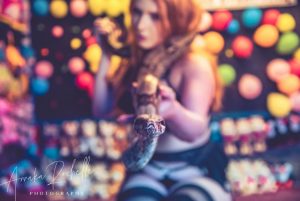 “The ride manufacturer was supposed to make a calendar,” Haisch said. “It didn’t have nothing to do with me.”

Haisch said he helped shut down the photo shoot as soon as he found out there were models in lingerie in a public area.

Haisch said the negative publicity did not impact the carnival’s attendance in Clay.

After photos were shared on social media, several news stories were posted online about the lingerie photo shoot. Burg said low-quality photos taken from a distance did not convey the true quality and philanthropic purpose behind what the models were doing.

“It got blasted all over and it was the opposite of positive,” said Burg. “Nobody could see the positive things we were trying to accomplish. Nobody could see anything good about it. It was all this big joke.”

Burg said she hopes everyone who read the news articles about the photo shoot will take the time to read her part of the story.

“The whole shoot was to bring light and relevance back to the carnivals in a fun and artistic way while also promoting women empowerment, self-expression and the reptile rescue,” Burg explained. 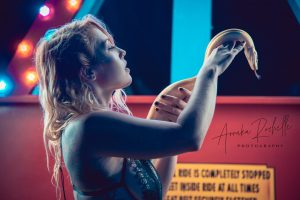 Burg said reptile education is important to her because she has been around snakes for most of her life. She wants to support efforts to keep snakes involved in live animal school education.

“Snakes like the ones used in the shoot and other animals may be banned from interstate travel in the very near future,” she explained. “The Health and Economic Recovery Omnibus Emergency Solutions Act, (HEROS Act) contains language that would reverse the USARK federal lawsuit victory by reinstating the ban on interstate transportation of species listed as injurious under the Lacey Act. That means no school education with live animals, restricted pet ownership, and no awesome photographs like these.”

Although the carnival organizers and owners said they did not know lingerie would be involved in the photo shoot, Burg insists that she was specifically asked to provide girls in lingerie.

“It was requested for the girls to be dressed that way,” Burg added. “It hurt me for them to throw me under the bus that way without even calling me and having a conversation about it. They just lied. This was an inaccurate representation of what we were doing.”

Burg said she wants every woman she photographs to feel beautiful and empowered.

To have it seem negative is why I’m speaking out now and why I want my side out,” Burg said. “We should be proud of artistic expression and should fight for the things we believe in. I am proud to be a woman and I am so proud of the work that we accomplished here.”

Burg said she still plans to make a calendar to sell from the photo shoot.