MOODY — Two people are facing multiple charges in Moody after a shooting at an apartment complex. One of the suspects is a juvenile and was arrested during school at Build Up Ensley. The school offers low-income youth career-ready skills through apprenticeships and academic coursework, according to its website. The school’s principal, Jeanyll Morris expressed her displeasure with the way the arrest was handled, in a video made at the time of the arrest and later aired by WVTM-13.

“A bunch of white men just walked into my school and took one of my children without not a single piece of paperwork,” Morris said in the video. “Didn’t introduce anything, didn’t say anything.”

However, law enforcement said they did all they could to make sure everyone inside the school was safe.

The 16-year-old who was arrested will be charged as an adult, but his name has not been released. Moody Police Lt. Pete Hicks said charges against the teen include attempted murder, robbery first-degree, theft of property, breaking and entering of a vehicle, discharging a firearm into an occupied vehicle, criminal mischief second degree and attempting to elude law enforcement. Hicks said more charges are expected as the investigation continues.

Bullet hole can be seen on the outside of an apartment in Ashley Manor.

According to a police report, the crime the teen is charged with happened in the early-morning hours of Saturday, Aug. 29, 2020. Officers received a call about a shooting at the Ashley Manor Apartment complex, around 2:30 a.m.

“The suspect in the case tried to steal a pickup truck and the owner of the vehicle came outside and the 16-year-old suspect shot at the vehicle owner, hitting the building” Hicks explained.

Hicks said seven to 10 shots were fired. One of the shots hit an apartment occupied by small children.

“This is a relatively safe complex,” Hicks added. “We have very few problems here.”

The complex has its own officer on site and it took Moody Police a matter of minutes to get to the scene, according to Hicks.

The suspects fled the scene, and one of them was arrested shortly after the incident. But the 16-year-old police were looking for was nowhere to be found. The teen was identified by detectives through evidence, including witnesses and video. Hicks said the teen is from Center Point. Hicks went to the teen’s home to arrest him and he wasn’t there. That’s when Hicks made the call to ask the Jefferson County Sheriff’s Office to pick up the teen from his school, Build Up Ensley, on Tuesday, Sept. 1.

Hicks, a black law enforcement officer who is from Ensley, said the arrest had nothing to do with race and that any assertion otherwise would be incorrect.

“There are issues out here,” Hicks said. “There are racist cops in society. There are bad cops. The vast majority are good and are doing their job. Unfortunately, you only hear about the ones that make the news because they messed up and give us all a bad reputation. The problem is, you can’t turn every situation into a racial situation. This is not that.”

Hicks said no matter what race a person is, they must know there are consequences to their actions.

“So, I know how hard it is to be a black male in today’s society,” Hicks added. “That’s also why I believe you have to be responsible for your actions. He made the decision to come out here and commit a crime. He made the decision to get a weapon and fire it indiscriminately in an apartment complex, striking multiple vehicles and occupied residences. He made a decision to put people’s lives in danger. No one forced him to do that.”

After investigating the shooting at the apartment complex, Hicks said he knew the arrest would have to be made quickly.

“For his safety and for the officers’ safety, when you go to arrest him, you don’t announce that you’re coming and give him time,” Hicks said. “We know he possesses firearms, we have pictures of him with firearms and he shot at someone. He didn’t run a red light, he didn’t jaywalk. He fired a gun at another human being with the intent to kill that person during the commission of a crime.”

Moody Police Chief Thomas Hunt said anger over how the arrest was made is overshadowing the real issue.

“We’re forgetting what really matters here,” Hunt said. “It doesn’t matter if it was four white deputies or if it was four black deputies that came and arrested this guy. The main problem we have here is this young man, with some other suspects, came to Moody, Alabama attempting to steal some vehicles and shot at somebody.”

Hunt said although the arresting officers were accused by the principal of not reading Miranda Rights to the teen, the deputies did nothing wrong.

“They weren’t questioning him, so they didn’t have to read him his rights,” Hunt explained. “Jefferson County was very helpful and they went to the school and handled that side of the investigation by picking this young man up for us.”

Lt. Hicks said he advised the teen of his rights when he arrived in Moody for questioning.

Procedures for serving warrants are very situation driven. When we have an order from a court to arrest someone – we do everything possible to take that person into custody safely. It is best when done quickly so there is no opportunity for the suspect, anyone else in the area or law enforcement to be injured. The arrest is made and the subject is removed from the location as soon as possible. The safety of the suspect, our citizens and our deputies is always the first and most important concern.

Hicks said he wants to remind the public, all suspects are innocent until proven guilty. He also said anyone suspected of a violent crime will be taken into custody in a swift manner.

“Once you get to this level and you’re out here shooting at people, it’s not a game,” said Hicks. “We’re not going to come in there and treat you like a child at that point and ask you to please not shoot at anybody anymore. You’ve demonstrated that you’re willing to kill someone to get away.”

Hicks said law enforcement officers are well trained when it comes to making arrests. He said he would have handled the arrest in the same way the sheriff’s office did.

“If a teacher tells a student to come with them because the police want to talk to them, they could pull out a weapon and shoot,” Hicks added. “They’re not trained to deal with that.”

The principal was not made available to speak to The Tribune on the matter, but CEO and founder of Build Up, Mark Martin said Jefferson County Sheriff Mark Pettway and Chief Deputy David Agee visited the school after the arrest.

“It turned out both the sheriff and Deputy Chief Agee went to school out here at Ensley High School, which is five blocks from our school,” Martin said. “They have walked in our kids’ shoes before and that made it unfortunate but they’re also willing to talk to the kids. We want to get to a place where we can be collaborative.”

Martin said the school would have preferred for authorities to communicate with those in charge of the school before making any arrests.

“We want to ensure that the students’ safety is primary, all of the students,” Martin said.

Martin said he would like to see a change in policy when it comes to making arrests inside school buildings. He said a more thoughtful planning process could improve relationships between the black community and law enforcement.

“The optics of eight while cops coming into an all-black school and taking a student is what I’m talking about,” Martin said. “And so, can we be more thoughtful about which officers we assign to something like that?”

Martin said he is thankful things ended the way they did, with no one getting hurt.

“I don’t think by the book that the sheriff’s office did anything wrong,” Martin added. “I think they were within their rights to do what they did. I am very glad that it ended with everyone’s physical safety being preserved.”

Martin said he does not feel comfortable knowing that law enforcement can enter a school building without first talking to someone in charge.

“It does not feel good to any adult that police can enter a school building and take a student without talking to a responsible adult or guardian,” Martin explained. “That feels to me more like kidnapping. I am not saying, and please be very clear on the record. I’m not saying they kidnapped our student or it felt like that at the time. I’m saying the way that the law allows this to go down in this way, it allows for things and if it allows to that point, and I think again, my experience every time before has been that the conversation is held in the front office of the school and a student is usually brought down without telling the student why you’re bringing them to the office because you don’t want them to bolt. Usually, it is handled more conspicuously.”

During the arrest Tuesday, Martin said he didn’t feel that students’ mental health and social and emotional safety were considered.

“A lot of people in the black community are traumatized by the things we have seen over this summer from George Floyd but also throughout their lives,” said Martin. “Over-policing has traumatized the black community, so storming in and arresting a student in front of them is not an ideal way to go about it.”

Martin said the teen was new to the school.

“The concern, especially at the beginning of the year would be as we get to know students, and this student was brand new to our school, why would we try to have an incident in front of a ton of other students where if something bad were to happen, if someone resisted arrest if someone had a weapon on them, why would you do that in the presence of other children?” Martin continued.

“What loving adult, what loving parent, what loving school personnel would not respond very emotionally if they saw that?” Martin asked. “She’s passionate about all kids.”

That passion is how the school is successful in helping students choose a positive path. But with growing racial tensions across the nation, Martin said that goal is more challenging.

The teen was taken to the St. Clair County Jail. 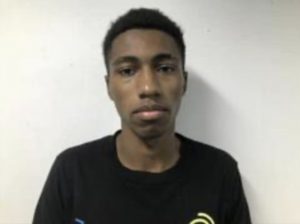 Aalijah Curry, 18, of Pinson, was the other suspected arrested on the morning of the shooting.

Jail records show he was charged with breaking and entering a vehicle and theft of property second-degree. Hicks said Curry could also face additional charges.