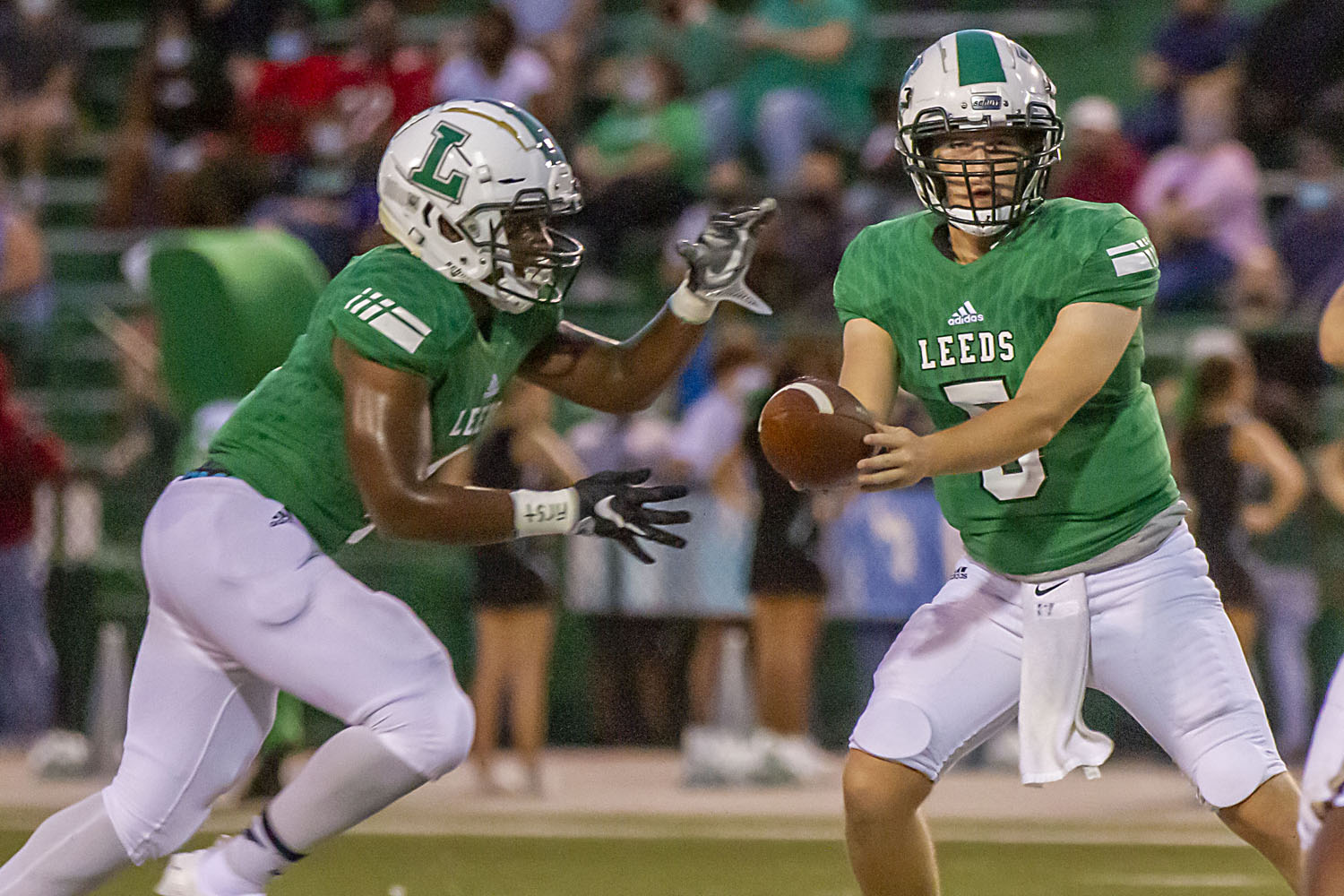 Leeds quarterback Jarod Latta offers up a give during a home game on Aug. 28, 2020. Photo by Ron Burkett

The third week of the high school football season features six matchups across The Tribune’s coverage area. Each game is scheduled to kickoff at 7 p.m. on Friday, Sept. 4.

Hewitt-Trussville has a score to settle this Friday in Hoover.

First-year Spain Park quarterback Bennett Meredith threw for 185 yards and a touchdown to lead a 21-14 comeback over Briarwood Christian last week. The righty tossed for another 391 yards and four scores against Huntsville on Aug. 21.

The Rockets have opened up 2020 with back-to-back victories over 7A competition. Senior quarterback Will “Goose” Crowder, a West Virginia commit, has orchestrated double-digit wins over Sparkman and Smiths Station. Gardendale won those contests by a combined score of 48-14.

Pinson Valley has won three straight in the series, and will need its best showing of the young season to make it four in-a-row.

This will be Jasper’s first region test as a Class 6A school, and it’s a tough one.

The Vikings (1-1) are coming off a 21-0 loss to Cullman, while No. 7 Clay-Chalkville improved to 2-0 with a forfeit win over Hueytown last week.

The Cougars are back on the road after starting the season with a 37-19 win at Shades Valley. I expect another dominant Clay-Chalkville effort this Friday at Ki-Ro/Gambrell Field.

According to ahsfhs.org, the two teams have never met head-to-head. Friday night’s contest will open up a three-game conference stretch for both squads, as Center Point (1-1) travels to Lincoln on Sept. 11 and hosts Moody on Sept. 18.

After hanging 52 points on Jacksonville last week, the seventh-ranked Valley Cubs (1-0) are the only Region 6 representative to rank inside the top 10 of the latest Alabama Sports Writers Association poll. They will be a tough out on Friday night at Center Point High School.

Lincoln has won the last two in this series, but I expect that to end this Friday night in what will be the Class 5A, Region 6 opener for both sides.

The Golden Bears are off to an 0-2 start after consecutive losses at home to Southside-Gadsden, 40-27, and Sylacauga, 41-25. Leeds, on the other hand, took Sylacauga deep into the fourth quarter on opening night, eventually losing 33-27 thanks to a last-second touchdown pass.

The Green Wave (1-1) bounced back on Aug. 28 with a dramatic 20-17 win over Pell City. With a victory this week, Leeds would match its season total from last year with two.

Springville is the one Tribune-area team not in region play this week, as the Tigers look to improve to 2-0 with a visit to Cherokee County (1-1).

The Warriors opened up their season with a 41-0 beating of Carver-Birmingham and followed up with a 39-7 home loss at the hands of Piedmont last Friday. Reigning Tribune Player of the Week Pearson Baldwin hopes to find similar success at Warriors Stadium this Friday in what will be the first-ever meeting between the two schools.