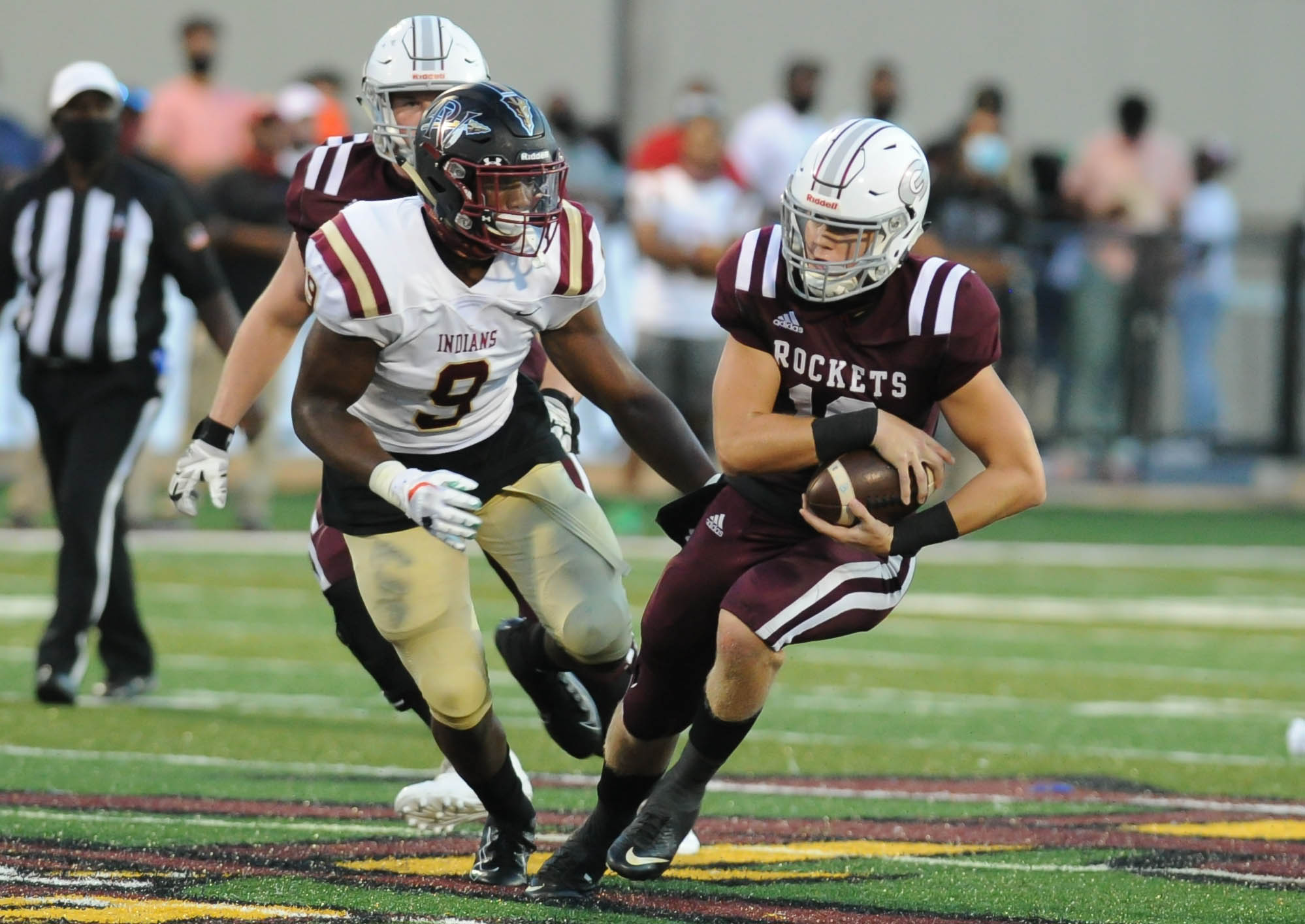 PINSON — The Pinson Valley defense pitched a second-half shutout to lift the Indians over Gardendale (2-1, 0-1) 26-15 on Friday night at Willie Adams Stadium.

The home team forced two Rocket punts, one missed field goal and a turnover on downs during the final two quarters of play to improve to 1-0 in Class 6A, Region 6 play. With the threat of COVID-19 looming, Pinson Valley head coach Sam Shade says his team is approaching each game like it’s their last.

“We said there are no guarantees on how many games we’re going to get to play, so we come out and we play every game like there’s not going to be a next game, so every game on our schedule is the most important game,” said Shade.

The No. 6-ranked Indians (2-1, 1-0) certainly played with urgency on the defensive side, forcing three lost fumbles and allowing only two scoring drives in 12 Gardendale possessions. Senior quarterback Will “Goose” Crowder was under constant duress against an active Pinson Valley defensive front that allowed nine first downs and 294 yards of offense in the win.

Other than a 74-yard touchdown run by LT Sanders late in the first quarter, the Tribe contained Gardendale’s ground game. Sanders’ long trip down the right sideline was one of Gardendale’s two 10-plus-yard carries of the night. Sanders also broke off a 14-yard attempt early in the third quarter.

The eighth-ranked Rockets finished with 119 yards on the ground and another 175 through the air. Pinson Valley posted 90 yards rushing to go with 160 yards passing from junior quarterback Zach Pyron.

“I think Zach is still getting adjusted to the offense,” said Shade. “We did not have spring practice, so we had about two weeks in pads with him and we’ve played three games, so that’s five weeks of real football with that kid and I think he’s going to get better and better as we go.”

Whether it be with Pyron or running backs Michael Sharpe Jr and Kenji Christian, the Indians went to the ground in the red zone. The home team punched home all four of its touchdowns on the ground Friday night.

Sharpe ran in the first two from 7 and 2 yards out in the first half, sending the Indians to the break down 15-12.

Christian punctuated a 10-play drive with a goal line score that ultimately served as the go-ahead touchdown. His short finish put Pinson Valley ahead 19-15 with 3:01 remaining in the third.

Pyron ended the scoring with an 11-yard quarterback draw with 10:53 remaining.

“It feels good blocking for that group back there,” said senior offensive tackle Rayvon Crum. “Mike and Kenji are going to do what they do, get their yards, run people over and it’s good to have running backs like that.”

One of Pinson Valley’s few defensive blunders came at the end of the first half when Crowder feathered a 32-yard touchdown into the hands of Derek Carter Jr, who fought through tight coverage to give Gardendale a 15-12 halftime lead.

The Tribe will stay in region play next week with a trip to Minor.