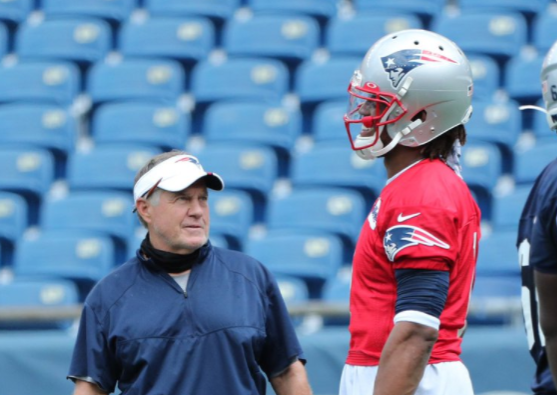 The Hoodie and the Fedora.

Talk about an Odd Couple.

Yet, much like Felix and Oscar, we have a feeling that Bill Belichick and Cam Newton will come to a detente that tests their comfort levels but serves them both well in New England.

If nothing else, it figures to be the best new reality show on television this fall.

“I think the most exciting thing is that nobody knows,” Newton said Friday. “Stay tuned.”

As disparate as they may seem, both men have so much to prove to the rest of the NFL heading into what will likely be a one year-and-done partnership with the Patriots.

For the 68-year-old Belichick, this is a chance to truly confirm his coaching genius by guiding a team to the Super Bowl without Tom Brady as his quarterback.

For Newton, it’s a chance to defy all those skeptics who say he’ll never recapture the form that made him the league’s MVP back in 2015.

For this to work, both must be willing to bend a little — maybe even a lot, at times.

So far, they seem to have found plenty of common ground.

Newton on Belichick: “If anything, you come to appreciate his greatness even more. He’s an unbelievable teacher of the game. And I think that’s not highlighted enough, especially for a person of his caliber and status.”

Belichick on Newton: “Everybody’s competitive, but I think there’s different degrees of it. Based on what I’ve seen, I would put him in the top echelon of that.”

Of course, this is that giddy time of year when everyone looks like an All-Pro, when every team views itself as a Super Bowl contender. Only when they reach the bumps in the road — and there will be plenty of those over the course of a 16-game schedule — will be know for sure if Belichick and Newton are truly simpatico.

This much we do know: Newton will be the starting quarterback when the Patriots open the season Sept. 13 at home against Miami, which wasn’t really much of a surprise considering the level of competition in training camp (second-year pro Jarrett Stidham and journeyman Brian Hoyer).

Still, it will be jarring to see someone wearing No. 1 instead of No. 12 at quarterback for the Patriots.

It was Brady’s defection to the Tampa Bay Buccaneers that set this whole thing in motion. After two decades and a half-dozen Super Bowl titles with the Patriots, the 43-year-old headed to the Gulf Coast for the sunset of his career.

Brady also has a lot to prove, taking the helm of a lowly franchise at an age when most players have long since traded their shoulder pads for a rocking chair. Rest assured, he’ll be keeping an eye on the happenings back in New England, much like Belichick and Newton will surely be looking southward to see how they’re measuring up.

Belichick’s legacy as one of the NFL’s greatest coaches is secure, even if he never wins another game. But his steely focus surely kicked into overdrive when Brady departed for the Buccaneers — and probably ramped up even more with the barrage of headlines coming out of Tampa Bay on a daily basis.

As intrigued as we all are to see Brady The Buc, the more compelling story will be unfolding in Foxborough.

Newton guided the Carolina Panthers to a Super Bowl with a dynamic season that seemingly stamped him as the game’s biggest star: a charismatic, dominating player who could beat you with his arm or his legs. But he never matched the success of 2015, leading critics to question everything about the Black quarterback from his dedication to his flamboyant fashion choices at post-game news conferences.

The more pressing issue was Newton’s 31-year-old body, which seemed much older. He underwent surgery to repair a torn rotator cuff in his throwing shoulder before the 2019 season, then played only two games before being placed on injured reserve with a broken foot.

Released by the Panthers, Newton went through much of the offseason without a team.

Finally, he hooked up with Belichick and the Patriots for a bargain-basement contract that essentially gives him a year to prove to the rest of the league that he’s still a franchise quarterback, while barely disturbing New England’s hefty bit of salary cap space.

Even though it’s not much of a financial gamble for the Patriots, the deal raised eyebrows around the league: How could the charismatic Newton possibly co-exist with a coach who has about as much personality as that hoodie he wears?

But all great coaches know how to bend a little when it suits their needs. If that means turning the other way while Newton dances his way through a practice drill, so be it.

While Newton doesn’t go about his business the same way as Brady, there’s nothing to indicate that he lacks the passion, the work ethic, or the commitment of his predecessor. He was even named a captain by his new team.

“I wanted to make sure they understood my drive and understanding that I’m not taking this opportunity for granted,” Newton said. “And whether it’s showing up as early as I do show up or leave as late as I leave, I know people know that my heart is in the right place.”

Belichick knows this is a player — certainly the only one on his current roster — who can get him to the post-Brady promised land.

And if we can let our mind wander to the most glorious of plot twists, wouldn’t it be amazing if all three of them got together down in Tampa come February, when Brady’s new city hosts the Super Bowl?

That would make this Odd Couple even better than the original.