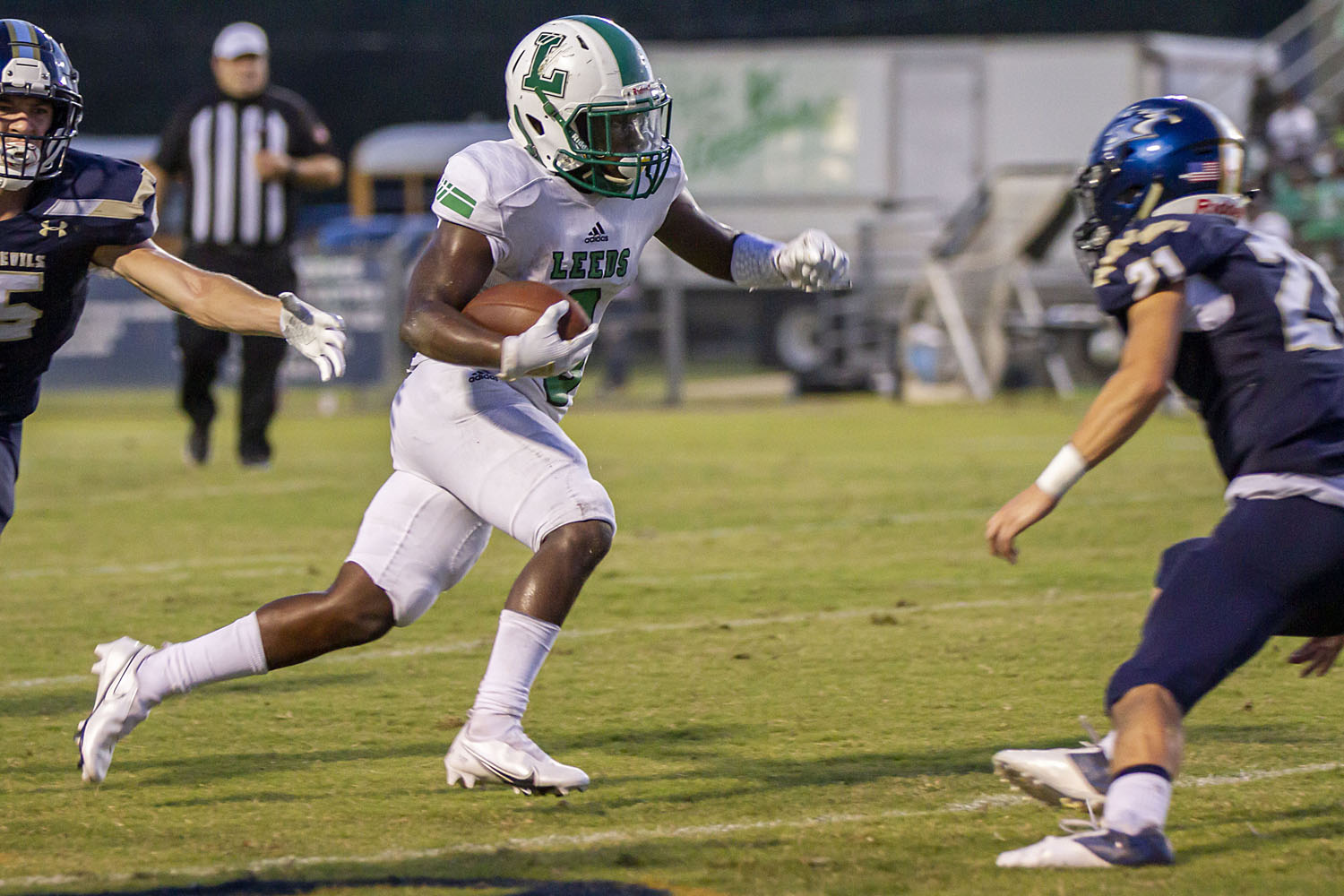 Leeds tops Moody in ‘Battle of the Bridge’

MOODY — Leeds traveled over the “bridge” on Friday night to take on the Moody Blue Devils at Bill Morris Stadium and came back with a 55-20 victory in the Class 5A Region 6 matchup. The Green Wave were riding a two-game winning streak while Moody was coming off a 2-week hiatus due to COVID-19 concerns.

“It (being off for two weeks) was tough, but we did some things tonight that had nothing to do with that. You can’t do those things and win football games,” said Moody head coach Adam Wallace.

Leeds set the tone for this one early on the defensive side of the ball. On the first play from scrimmage, the snap flew over the head of Moody quarterback AJ Wallace for a safety. Only 10 seconds into the game, Leeds led 2-0.

On the next drive, the one-two punch of Jeremiah Hunter and Rametrius Yelverton started their onslaught with a combined 46 yards rushing, capped off by a 5-yard run by Yelverton into the end zone with 9:05 left in the first period. The PAT made it 9-0 and the Green Wave were rolling.

On the next drive, the Leeds defense once again stopped everything Moody tried to do and held them to a three and out deep in their own territory. Moody’s Parker Dodd lined up for the punt in his own end zone but Leeds broke through the line and blocked the punt with Jamal Jordan falling on the ball and putting the visitors on the board for the second time in less than two minutes, the score now 16-0 after the Jackson Arthur PAT.

The next drive was like déjà vu, with Leeds holding Moody deep in their own territory and once again Dodd found himself in the shadows of his own goal post attempting to punt. This time it was not blocked; however, Leeds defensive back Christian Douglas tackled Dodd in the end zone for another safety. With 6:42 to go in the opening quarter, Leeds found themselves in the driver seat with an 18-0 lead.

Jackson Arthur would extend the lead to 21-0 with a field goal late in the first. 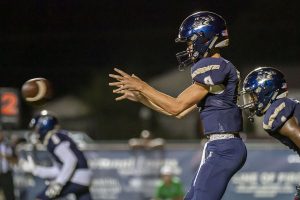 Moody quarterback AJ Wallace takes the snap during a home game against Leeds on Sept. 11, 2020.
Photo by Ron Burkett

Now, with time to exhale, Moody began to gain some momentum as the offense found some success in the passing game. Wallace found his favorite target on the night, wide receiver Logan Cole on a first and 10 from the 29 for the first score of the night for the Blue Devils. On the ensuing drive, Moody’s defense held Leeds to a punt by Daniel Hood. Moody’s Pate Argo broke through the line and blocked the punt and Parker Dodd scooped up the ball and ran it in from 38 yards out to put the second score on the board for the Blue Devils in this rivalry game. The score was now 21-14 with 5:32 left in the first half and the pendulum was beginning to swing Moody’s way.

Both defenses held steady until the end of the half. With 7 seconds left before the break, last week’s dynamic duo from Leeds found paydirt on a fourth-and-5 from the 23. Jared Latta found Joshua Ruff in the end zone to put Leeds up 28-14 heading into the locker room.

The Green Wave got the ball back in the second half and once again Yelverton and Hunter took over, moving the ball 63 yards on 3 runs, capped off by Yelverton punching it in from 10 yards out with 7:04 left in the third quarter.

On Moody’s next drive, a common theme occurred. Another snap sailed over AJ Wallace’s head and this time it went into the end zone with Leeds’ Cameron Dunklin falling on the ball and putting his team up 42-14.

The Leeds defense held again and Latta and company got back to work at the Moody 19, moving the ball to the 5-yard line before the quarterback called his own number on second and goal and punched it into the end zone for another Leeds score. Now it was 49-14 with 3:25 left in the third.

Trying to make something happen on the next drive, Wallace threw a pass to Davion Dosier but Leeds defensive back Jacob Cain broke on the ball and picked it off at the 20 and took it to the house untouched. Arthur missed his only kick of the night but his team was now up 55-14 with 2: 45 left in the third and that is how it would end.

The fourth quarter saw some passing success for the Blue Devils with Wallace finding Kolby Seymour for a 30-yard touchdown with 3:10 to play. They went for the 2-point conversion, but it failed and the game would end with Leeds winning the cross-town rivalry by a score of 55-20.

“Both sides played well in spots. We had a lot of penalties. We gave them life there for a little bit,” said Coach Jerry Hood. “We are so young. I had to tell the guys at halftime to calm down. These guys have not practiced for 2 weeks and they are getting tired. So, we just ran the ball in the second half. I was disappointed with some of the receiver drops but overall, it was a great team win and more importantly we are 2-0 in the region.” Speaking of Moody, “They will get better every single week. You know, they have been off for 2 weeks and that’s an uphill battle especially on a hot and muggy night. They are fighting an uphill battle. I’m real proud of Adam and all of his guys.”

When asked how he felt about his team’s performance after the time off, Coach Adam Wallace said, “I was afraid what the two weeks off would do to us. It is not easy. But we just were not executing.” Asked how his team would respond, “All I know to do is to keep working. We are going to come in Sunday, and we are going to make corrections, hit the weights again and get ready for Center Point.”

Leeds, now 3-1 and riding a three-game winning streak, will head to Hayden next week. Moody will travel to Center Point.