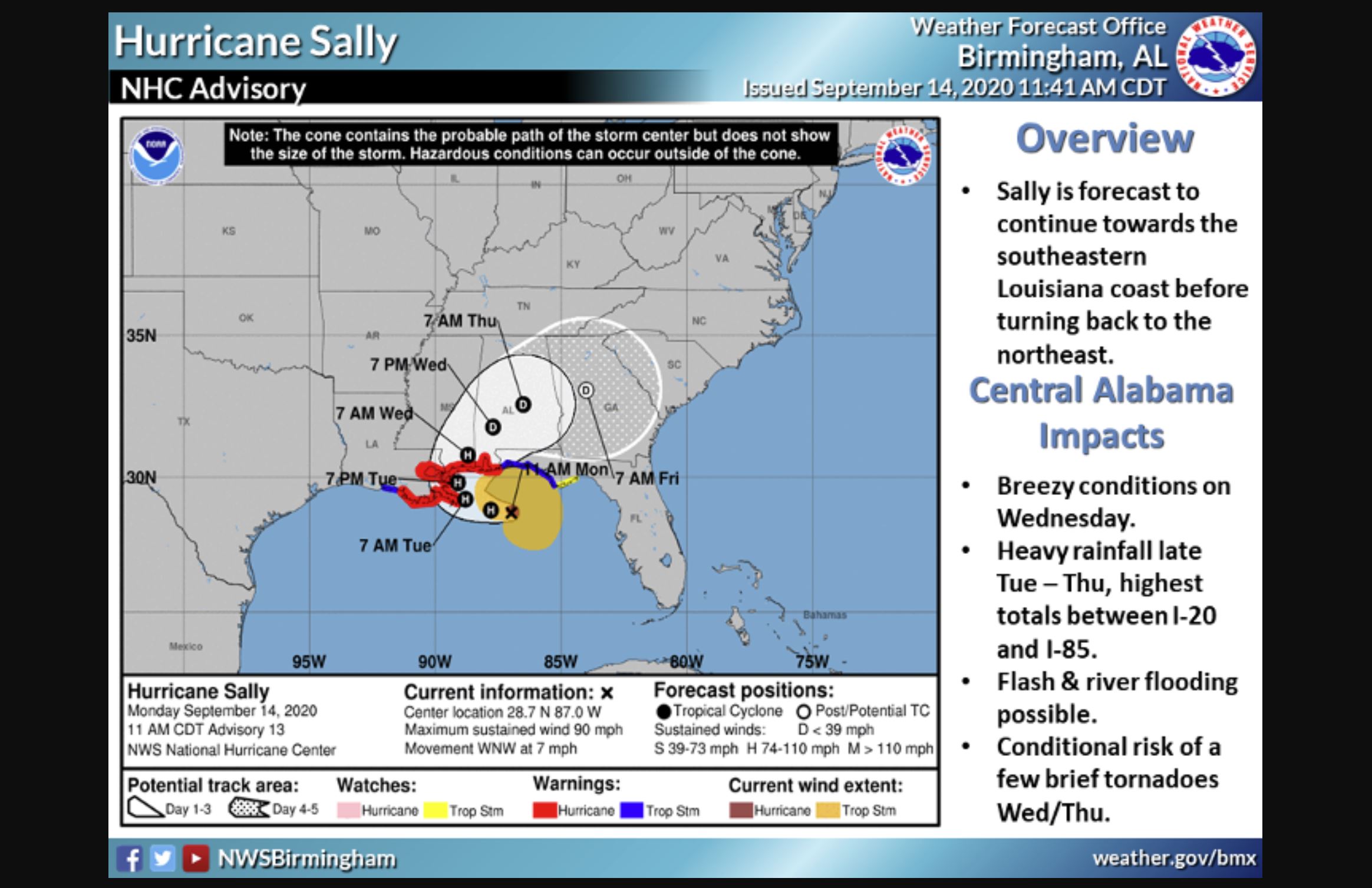 The National Hurricane Center said Monday that Sally has recently strengthened and developed an inner core, while the warm waters of the Gulf favor additional strengthen in the coming hours. The hurricane is currently packing 100-mph (155-kph) winds as it meanders offshore.

The Miam-based forecasting center said sustained winds of around 110 mph (177 kph) are now expected just before the hurricane makes landfall. That is just shy of a Category 3 hurricane on the Saffir-Simpson Hurricane Wind Scale, which is capable of catastrophic damage.

The storm was on a track to brush by the southeastern tip of Louisiana and then blow ashore late Tuesday or early Wednesday near the Mississippi-Alabama state line for what could be a long, slow and ruinous drenching.

Storm-weary Gulf Coast residents rushed to buy bottled water and other supplies ahead of the hurricane, which powered up to a Category 2 in the afternoon. Forecasters said sustained winds could reach 110 mph (177 kph) by landfall.

“This is the real deal, and it deserves your attention,” Mississippi Gov. Tate Reeves wrote on Twitter, shortly after the storm was upgraded. He urged people in low-lying areas to prepare to evacuate. “Be smart. Prepare for worst. Pray for the best,” he said.

Seawater and sand swept onto roads on one end of Dauphin Island off the coast of Alabama, washing away several cars, Dauphin Island Mayor Jeff Collier said. He said about a dozen people had to be evacuated by Humvee.

To the west, in Mississippi, Jeremy Burke lifted things off the floor in case of flooding in his Bay Books bookstore in the Old Town neighborhood of Bay St. Louis, a popular weekend getaway from New Orleans, about 60 miles (95 kilometers) to the west.

“It’s turning into a ghost town,” he said.

Sally has lots of company during what has become one of the busiest hurricane seasons in history — so busy that forecasters have almost run through the alphabet of names with 2 1/2 months still to go.

For only the second time on record, forecasters said, five tropical cyclones were swirling simultaneously in the Atlantic basin. The last time that happened was in 1971.

In addition to Sally were Hurricane Paulette, which passed over a well-fortified Bermuda on Monday and was expected to peel harmlessly out into the North Atlantic; and Tropical Storms Rene, Teddy and Vicky, all of them out at sea and unlikely to threaten land this week, if at all.