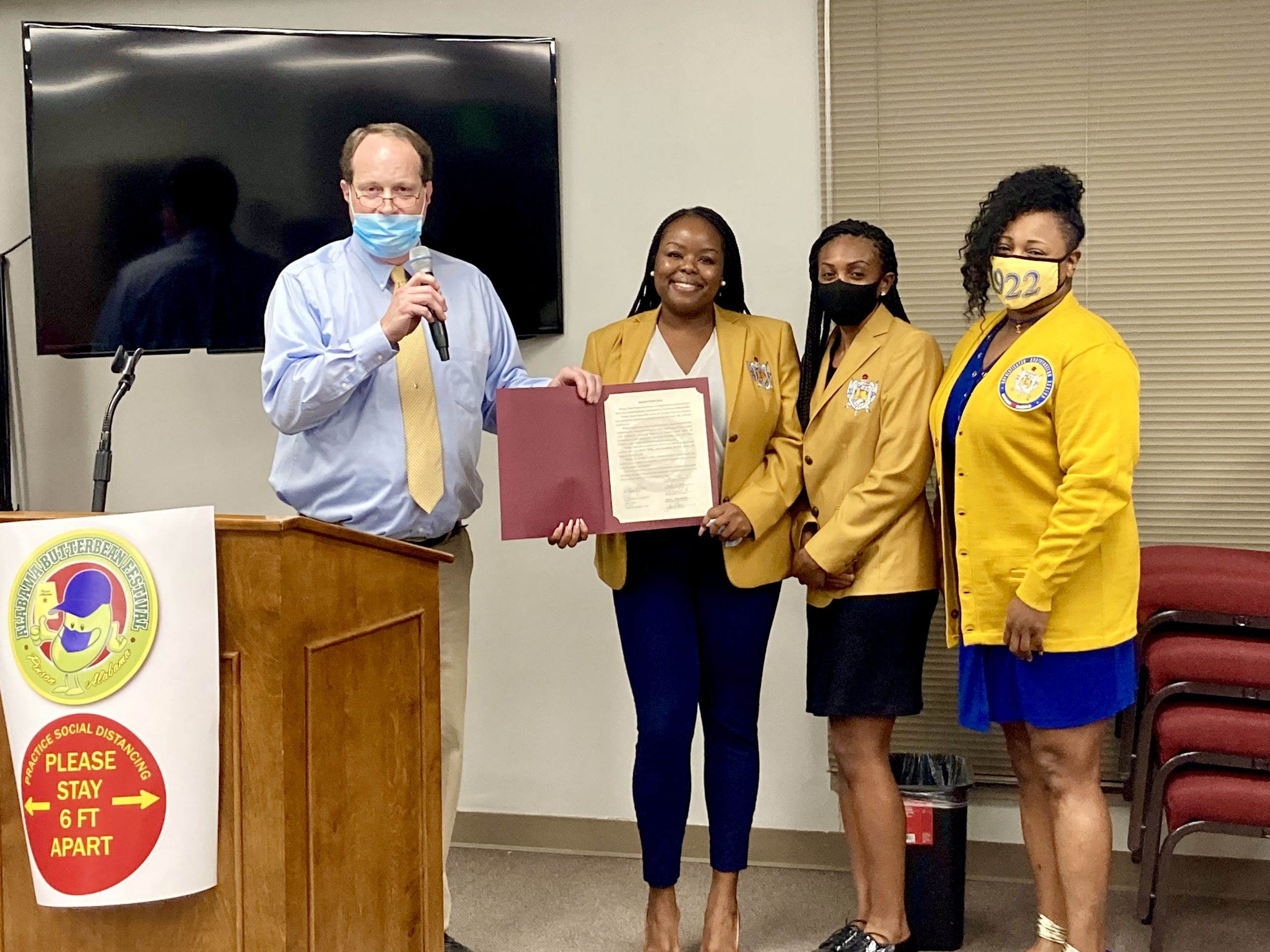 The Pinson City Council began its Sept. 17, 2020, meeting with a special recognition of the Sigma Gamma Rho Sorority, Inc, a national sorority that was formed by seven female educators in 1922 with the goal of enhancing the lives of women and youth.

Mayor Hoyt Sanders presented members of the sorority with Resolution 20-41, which states that Sigma Gamma Rho “provides many charitable services, volunteer service, and community programs, such as school supply drives, an annual Youth Symposium, community education on women’s health needs, and volunteering with other organizations such as USA Swimming: Swim 1922, March of Dimes, Susan G Komen, and the Girl Scouts of America.”

According to the resolution, the Lambda Eta Sigma Alumnae Chapter of Sigma Gamma Rho Sorority, Inc, which was founded on Sept. 11, 2010, has served the Pinson area for the past 10 years. 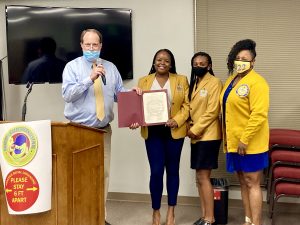 “Thank you all for recognizing us with this proclamation,”Jermeisha Purdie of the Lambda Eta Sigma Alumnae Chapter said. “We are so thankful, so humbled, that you all even were able to do that for us.”

Councilor Joy McCain announced that the Veteran’s Day luncheon will be a drive-thru this year, due to Covid-19. Those wanting to attend can go ahead and call Pinson City Hall to make reservations. Each veteran may bring one guest, and the city will be giving each person that comes through an umbrella, as well as lunch.

During pre-council, Councilor Dawn Tanner made sure to clarify that there would not be a limit on how many veterans could come to the drive-thru luncheon.

Pinson’s annual Shred A Thon, which was canceled last spring, is now back on the calendar for Oct. 17, 2020. Citizens can bring any papers and documents that they need shredded to city hall on that date. The event will last from 8 a.m. – 11 a.m., or until the truck becomes full.

Sanders said that Resolution 20-42, concerning a public nuisance at 5138 Gold Leaf Lane, “authorizes the mayor and the city attorney to file legal action due to the unauthorized and unpermitted construction and other activities at that address.”

Resolution 20-43 authorizes the demolition of a nuisance at 5438 Southfield Road North, pursuant to Jefferson County Circuit Court Case CV-2019-902522.00. Sanders said that this is concerning the remnants of a house that was destroyed in a fire.

Councilor John Churchwell offered a motion to approve the cleaning out of sediment and cobble in Dry Creek. Sanders said that the estimated cost for the project will be $10,000-12,000, which the city has available in its Road Funds. The motion passed unanimously.

Additionally, Sanders said that the time has come for the city to re-bid for on-call debris removal services. 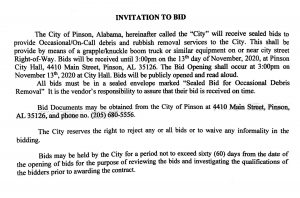 “This is not the residential service y’all will deal with in the spring,” he said. “This is for our on-call: tree limbs, washing machines, mattresses … and all the other illegal things that are intentionally or accidentally dropped.”

Councilor Dawn Tanner offered a motion for a 2% cost-of-living raise for city employees.

“Normally we do a raise sometime in the summer, but due to Covid back in March, we weren’t sure how we were going to be affected as a city, so we said let’s just revisit this in the fall.”

The motion for the raise passed unanimously.

“We count on our employees and are glad we can go ahead and do this,” Sanders said. “We’ve had a strong financial year and glad we can make this change.”

Longtime Pinson citizen and retired former city of Pinson employee Pat Wise spoke to the council and citizens of Pinson concerning litter in the city.

“It’s obvious, folks, that people are not going to quit throwing out trash in our community,” she said.”I don’t care how hard everybody tries to get the word out, it still continues.”

Wise said that, last week, she picked up two and a half 13 gallon bags full of trash on her street. She also said that someone she knows has had a sofa, a TV, and other miscellaneous items dumped near their house.

“My mission: I would just like to get the word out to our citizens, if they would just, every day when they go to the mailbox, pick up what trash is in their yard … if everybody would do that, at least it would take care of the neighborhoods. I can’t help the highways, but that was just something I had in mind. I just thought that would be a good idea.”

Ronnie Dixon, president of the Jefferson County Board of Education, spoke to the council concerning the county’s return-to-school plans.

“I’m sure you all have seen the back to school plan, in-person school,” he said. “It’s a little convoluted, so you have to make sure that you pay attention to it or you’ll have your kid at school on the wrong day.”

“That’s only for two weeks so that we can verify that there won’t be any kind of major outbreak between the kids or the teachers,” Dixon said. ” … After the first two weeks — then again in those stages — kid will go back to school five days a week, so that by Oct. 15, everyone will be in school five days a week. That is only for families who choose to do that. The teaching environment is going to be as if it were remote, even though the kids are in school.”

Dixon said that students zoned for Rudd Middle School will not be immediately returning to Rudd, due to renovations at the school being incomplete. The BOE does have a Plan B for those student, though.

“Rudd will not be complete for the scheduled opening but we do, at the board, have a plan B,” Dixon said. “The kids will start on the day that has been announced for their age group, but they will not be at the Rudd school. So we will announce Monday morning to the principals and the teachers where they will be reporting to, and the students will report there on their assigned day. We’ll have everything transportation-wise, food-wise, that will all be set up for them; it’s just not going to be at Rudd until it’s finished.”

The official “Return To School” schedule can be found at jefcoed.com.