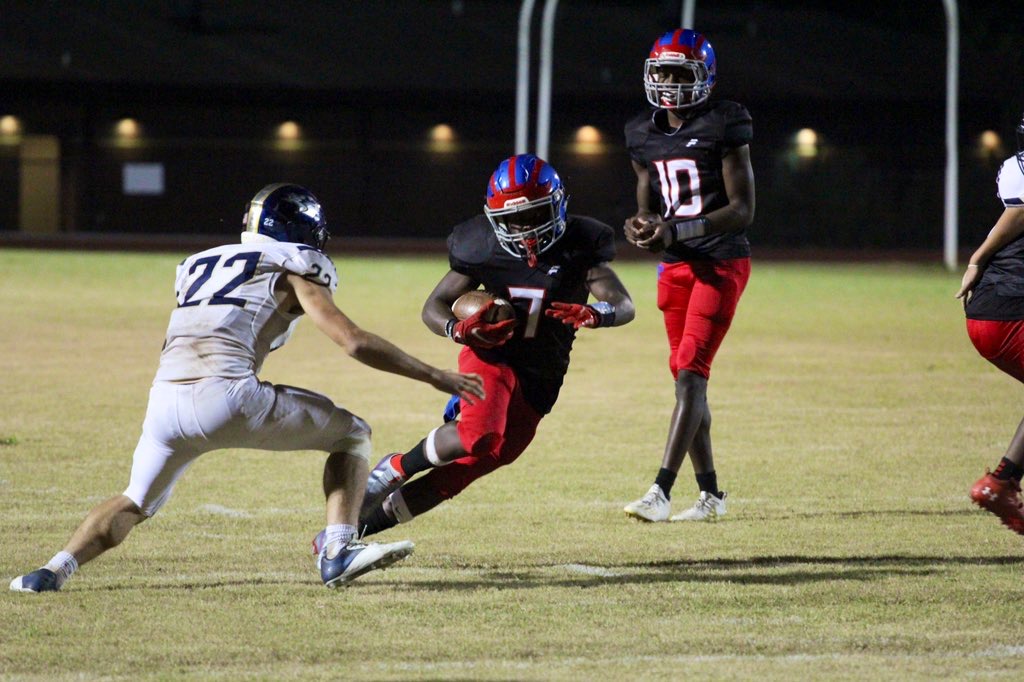 CENTER POINT — The return of Center Point’s Troy Bruce Jr. in the second quarter of Friday’s contest against visiting Moody breathed life into a floundering offense as the sophomore recorded three consecutive touchdowns to stagger the winless Blue Devils and allow the Eagles to cruise to their second straight victory, 56-14.

“He’s just explosive,” Center Point head coach George Bates said of Bruce, who has since moved from quarterback to running back as Jabari Collier slowly grew into the role of signal caller. “He’s got great vision and pretty good speed. He just brings that explosiveness to the backfield.”

Bruce, who had sat out the first quarter for undisclosed reasons, was an immediate spark for a Center Point offense that sputtered for much of the first quarter. Save for the imposing presence of D’Ontae Eatmon, the Eagles failed to generate any early momentum as they managed to turn the ball over on their own 37-yard line on their first possession and then proceeded to fumble the ball on their 2-yard line late in the quarter.

Though Center Point nursed a lead for the majority of the night, the Eagles never managed to corral the Blue Devils until the 7:49 mark of the second quarter. After turning over the ball on downs on Moody’s 2-yard line, the Eagles’ defense turned an 8-7 lead into a 10-7 advantage thanks to a safety following a sack of Moody quarterback AJ Wallace.

On the Eagles’ ensuing possession, newly-instated Bruce rumbled in from 62-yards out on the first play to cement Center Point’s lead. From then on, the Eagles’ run game would become an unstoppable force thanks to the thunder and lightning duo of Eatmon and Bruce.

Moody did manage to threaten twice in the closing minutes of the first half but the Eagles recorded two interceptions (one by Harold Hollomann and one by Bruce) to end the threats — Moody would turn the ball over four times on the night with three of those attributed to Wallace.

As such, Center Point took a commanding lead into halftime, 24-7.

Moody’s night went from frustrating to agonizing moments into the second half following a fumble on the opening kickoff. That miscue led to an eventual 6-yard Bruce touchdown that increased the Eagles’ lead to 34-7. The evening then morphed into a night of horrors for Moody as Center Point punched in two more touchdowns in the third quarter, along with recording another interception.

Center Point’s undisturbed run of touchdowns continued in the fourth quarter as Eatmon punched it in from 20-yards out with 7:55 remaining in the game to increase the Eagles’ lead to 56-7. The touchdown for Eatmon was his fourth of the night.

Statistically, Bruce managed to cobble together three touchdowns with one interception in three quarters, while Harold Hollomann recorded two interceptions for a defense that allowed just one meaningful touchdown in the game.

The victory for Center Point was its second straight after falling to region foe Alexandria in week three. Moody remains winless on the season and is still searching for its first overall victory over the Eagles (0-7 overall).

“It’s been effort, more than anything,” Bates said of the two-game winning streak. “Moving guys around. At this point, we don’t really care about the points that we give up, it’s about winning.”