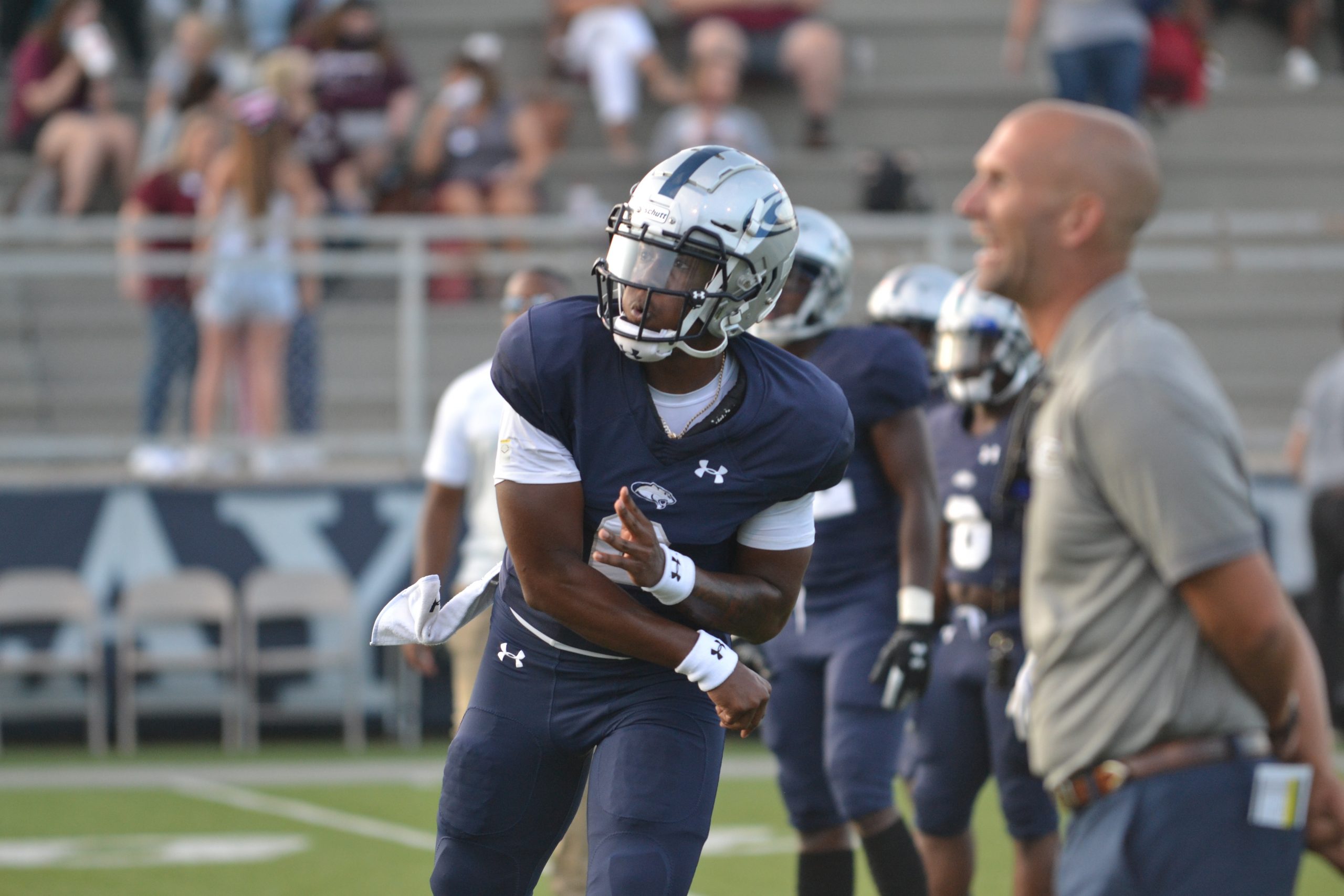 ADAMSVILLE — On Senior Night in Adamsville, the Clay Chalkville Cougars put their perfect 4-0 record on the line against Class 6A, Region 6 foe, the Minor Tigers.

“Our performance was horrendous in every way possible. But the good thing is, it’s easy when things are going bad, to quit and our guys didn’t do that,” said coach Drew Gilmer of his team’s performance.

Three turnovers and numerous penalties could have spelled doom for the Cougars, but they fought to pull out the 38-33 win and maintain an undefeated record on Friday night.

Minor started the game with the ball and the Cougar defense clamped down and held them to a punt. On the first offensive play for the Cougars, Kahlib Johnson’s pass was tipped and Minor’s Korez Goodgame picked it off to set the Tigers up at the Clay Chalkville 10-yard line and three plays later, Minor quarterback Alex Glass ran the ball in from 2 yards out to put the Tigers up 6-0 with 8:38 to go in the first.

On the next drive, Clay scored on a six-play drive that totaled 84 yards, 52 of which came on a pass from Johnson to Edward Osley. The drive was capped off on a 6-yard run by Cam’ron Williams to put the visitors up 7-6 with 5:47 to play in the opening frame.

After another Johnson interception, Minor was unable to capitalize. After trading possessions, the Cougars Jarren Van Winkle punted the ball to the 25-yard line where Minor’s Jalaunte Rodgers fielded it and took it to the house for a 75-yard touchdown that gave Minor the 13-7 lead at the 1:21 mark and that is how the quarter would end.

The next drive saw another nice offensive drive by the Cougars, finished off by the first of three touchdown passes from Johnson to Marquarius White, this time from 6 yards out. The Cougars took the lead 14-13 with 10:34 left in the half.

Minor could not move the ball and punted it back to Clay, who drove the ball deep into Tiger territory, but had to settle for a Van Winkle field goal of 38 yards to widen the gap to 4 with the score now 17-13 at the 6:50 mark of the second quarter.

Not to be outdone, the Tigers took the next possession down the field and found paydirt on a third and 1 from the 2-yard line when David Gardner Jr punched it into the end zone, giving Minor the lead once again at 20-17 with 2:54 to go. Once again, Clay found success on their next drive, this time with Johnson calling his own number from the 3-yard line and putting his team up 24-20 heading into the locker room.

The Cougars’ woes continued in the third quarter as they were driving the ball and on a second and 16, Johnson fumbled the ball for his third turnover of the night. Minor would drive the ball to the Clay 3-yard line, but the Cougar defense held them out of the end zone on four consecutive plays. Clay was unable to take advantage and gave the ball back to the Tigers who only took three plays to move the ball 58 yards, scoring on a 48-yard strike from Glass to William Hardrick to put the home team up 27-24 and that is how the third quarter would end.

The fourth quarter would serve as Khalib Johnson’s redemption story as he would find his go-to receiver, Marquarius White, for touchdowns on consecutive drives. A 10-yard throw and catch with 9:50 to go in the game and on the following drive, from 34 yards out and with 1:34 to go in the game, the Cougar faithful were breathing a sigh of relief with a 38-27 lead. Minor would not give up and added a 25-yard touchdown pass from Glass to Dimarian Cannon to close the gap to 5 at 38-33. A failed onside kick would seal the deal and Clay would leave Adamsville with the win.

“We were fortunate and lucky to pull the win out tonight. We don’t deserve it tonight,” said coach Gilmer.

Asked about Khalib Johnson’s resiliency, coach Gilmer said, “He made some bad decisions early. It’s youth and inexperience. The good thing is, he’s a fighter and he’s a competitor and he’s always going to come back and make the next play. And that’s a championship quarterback and that’s all we ask.”

Johnson ended the game with 13 completions on 23 attempts for 190 yards and three touchdowns, all of which were to White who ended the game with 92 yards on 6 catches. Edward Osley added 150 yards rushing on 23 carries as well as four catches for 68 yards.

Clay enjoys a bye next week while Minor welcomes in Jasper.