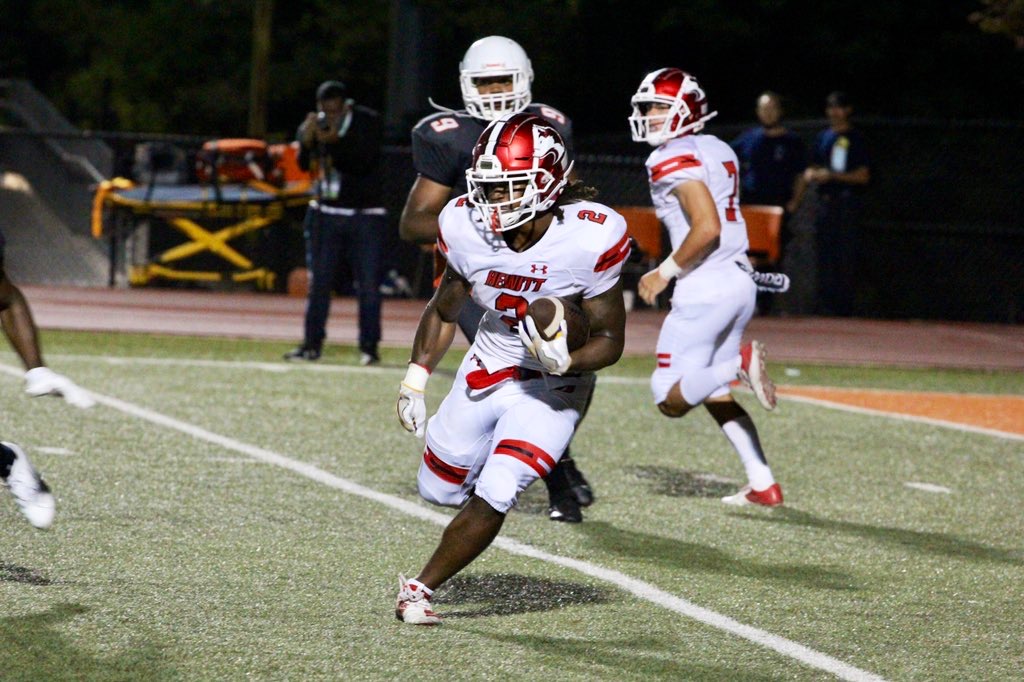 BIRMINGHAM — With its offense stuck in neutral all evening, Hewitt-Trussville turned to its kicker in the waning moments of regulation on Friday to defeat a tenacious Huffman team, 3-0, in what amounted to a gritty and resilient bounce-back performance following the Huskies’ Week 5 loss to No. 1 Thompson.

Ethan Wilson’s 40-yard field sealed the deal for the Huskies, which spent most of the night searching for an answer for a tough Huffman defense that has spent the past three weeks testing itself against several of the top teams in the state.

“Ethan smoked it through the uprights,” Hewitt-Trussville head coach Josh Floyd said. “We were fired up. We believe in him. He can get the job done. I’m proud of him for coming in at that moment. We had thought about going for it, but we gave him a chance.”

Wilson’s field goal was set up by a 70-yard Armoni Goodwin scamper, the longest of the game. The senior, who entered the matchup with 10 touchdowns in just four games played this season, had little impact throughout most of the contest. Overall, the Auburn commit was guilty of two fumbles (one a bad exchange) in the first half alone. However, when the Huskies most needed him, Goodwin delivered.

Though, as crucial as Goodwin’s run was, the play by the Huskies’ defense just prior to his run ultimately proved to be the catalyst for Hewitt-Trussville’s victory.

With its back to the wall midway through the fourth quarter, Hewitt-Trussville’s defense forced a Huffman turnover on downs at the Huskies’ 2-yard line thanks to a game-saving Michael Edwards tackle on Vikings quarterback Justice Christian. In fact, the Vikings had two opportunities on fourth down to punch it in, but were unable to.

“I can’t say enough about our defense,” Floyd said. “Our defense played phenomenal. They kept them out of the endzone a couple of different times. You always say that it’s a game of inches … Their quarterback almost got in there. He probably was at the quarter-inch line. Just stop after stop for our defense.”

In a game where the offense could do little to get out of its own way, the Huskies’ defense came up big on multiple occasions. The first such instance occurred just moments into the game following Goodwin’s fumble on Hewitt-Trussville’s first offensive possession of the night. That prompted a Vikings drive down to the Huskies’ 5-yard line. Yet, Huffman proceeded to run headlong into a Hewitt-Trussville defense that bent, but did not break. The stand forced the Vikings to attempt a field goal that sailed wide right.

Hewitt-Trussville’s offense had a chance to redeem itself in the opening moments of the second quarter, however, with the ball at the 5-yard line, Huskies quarterback Cade Ott Carruth proceeded to throw an interception in the endzone.

The Huskies would not threaten again until the final minutes of the fourth quarter.

“I haven’t been in one like this before,” Floyd said. “We’ll take the win and go home. We’ve got to get better. The offensive has to execute better. We’re young in a few spots. I think we’re getting better. We’ve got to keep improving on offense. Can’t say enough about our defense.”