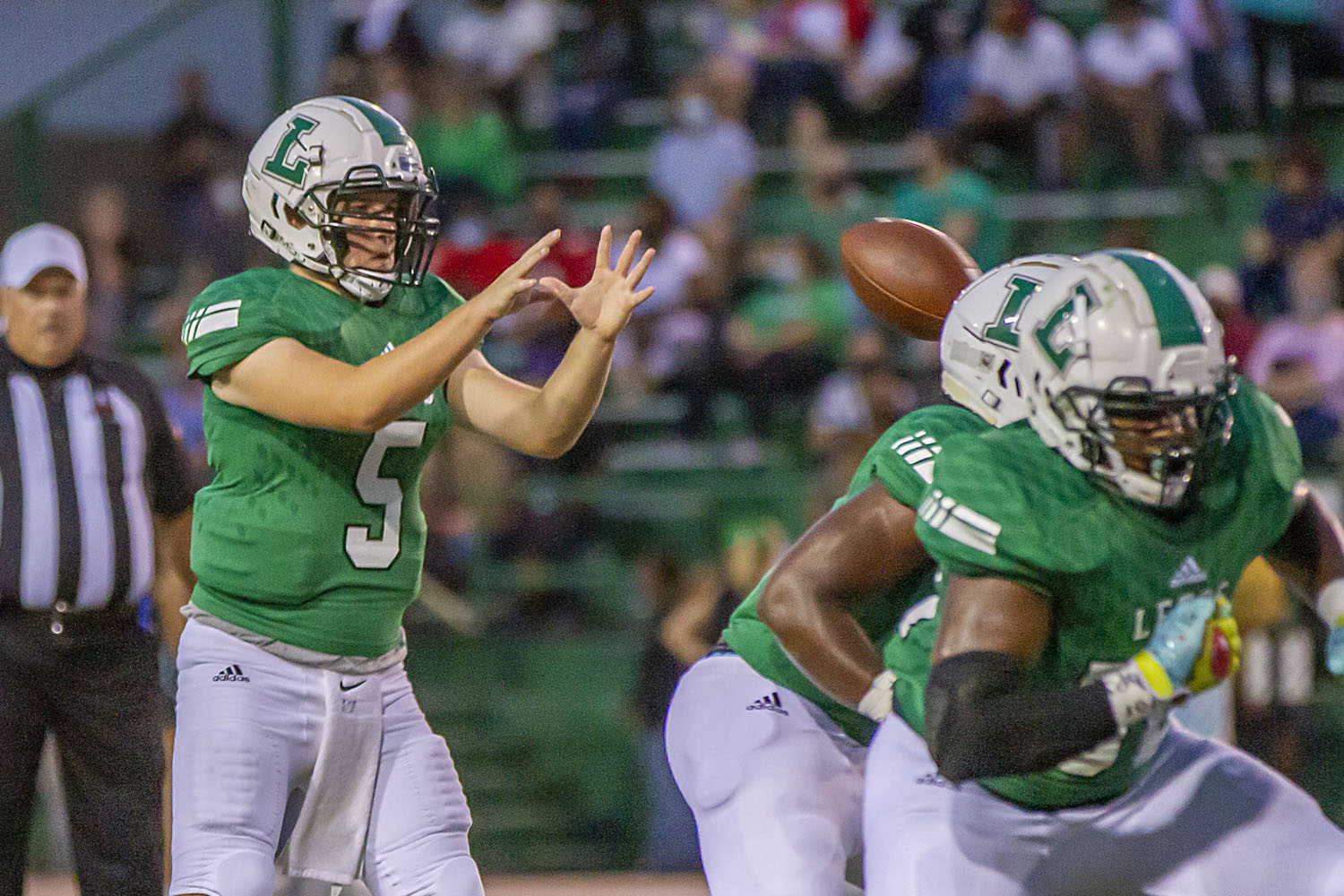 Leeds quarterback Jarod Latta (5) looks in the snap during a region win over Moody on Sept. 11, 2020. Photo by Ron Burkett

LEEDS — The Leeds Green Wave put on their best Jekyl and Hyde performance tonight with a homecoming victory over the West Morgan Rebels by a score of 35-12.

The Leeds defense never wavered but the offense could only muster a single first-half touchdown; however, they opened the flood gates in the second half on the backs of what can only be described as the 1-2 punch. Rametrius Yelverton and Jeremiah Hunter were a force to be reckoned with, scoring all five touchdowns between the two of them and putting up 236 yards on the ground in the winning effort.

The first quarter was a defensive battle that saw numerous stops, a couple of fumbles from Leeds and what coach Jerry Hood would call “A terrible start. Very immature. We got a hold on the first big run and that kind of set the tone for the half.”

After holding each other scoreless in the first quarter, Leeds found some success in the second when, on a third-and-20, quarterback Jared Latta took the ball himself and went 22 yards to set up his team at the Rebels’ 27-yard line. On first-and-goal from the 2, Latta handed it to Hunter who punched it in to put the first points on the board with 8:20 left in the half.

With the momentum appearing to have swung Leeds’ way, West Morgan set up shop at their own 20 and proceeded to march the ball down the field and on a fourth-and-9 from the Leeds 23, Rebel quarterback Glavine Segars found Caleb Terry to keep his team in the game at 7-6 with 3:35 to go in the half.

“I told them at halftime, ‘I’m not going to say a word in the second half, from the sidelines, but this is embarrassing the way we are playing,'” said Hood. “We are not sharp. We are not ready to go. If you go out there and tank this game, we will be practicing at 7 in the morning.”

These words rang in the ears of the Leeds football team at halftime and they responded.

Yelverton said, “Coach said we were going to work out at 7 in the morning. I was NOT going for that.” On the opening drive of the second half, Ruff, Yelverton and Hunter all ran the ball on a four-play, 43-yard drive that was capped off by Yelverton’s first touchdown of the night from 4 yards out to put Leeds up 14-6 with just 1:20 gone from the third quarter clock.

On the following drive, the Leeds defense held and West Morgan found themselves punting it back to the Green Wave; however, the punt was muffed, which allowed the Rebels to set up shop inside the Leeds 20 and eventually score on a 15-yard run by Segars, making the score now 14-12 with 7:38 to go in the quarter.

Leeds got the ball at the 40 and three plays later, Yelverton took it to the house from 37 yards out.

“I told my line, ‘Give me a push, give me two seconds, and I’m gone,’” said Yelverton of the big run.

The fourth quarter would see more dominating defense by Leeds and more of the Yelverton/Hunter duo as Hunter would pile up yards and Yelverton would punch it in with runs of 2 and 10 yards respectively to end the night with 10 carries for 119 yards and four of the five touchdowns scored for his team.

Coach Hood speaking of Yelverton: “Here’s the thing. You coach football to affect the lives of the players you coach. This guy right here had to learn some hard lessons and he learned them. So, to his credit, he has come back strong than ever and he is one of the most solid kids we’ve got right now.”

Hunter added 117 yards on 13 carries and the one touchdown.

Riding a five-game winning streak, Leeds plays host to Center Point next week in a big 5A, Region 6 game next Friday.