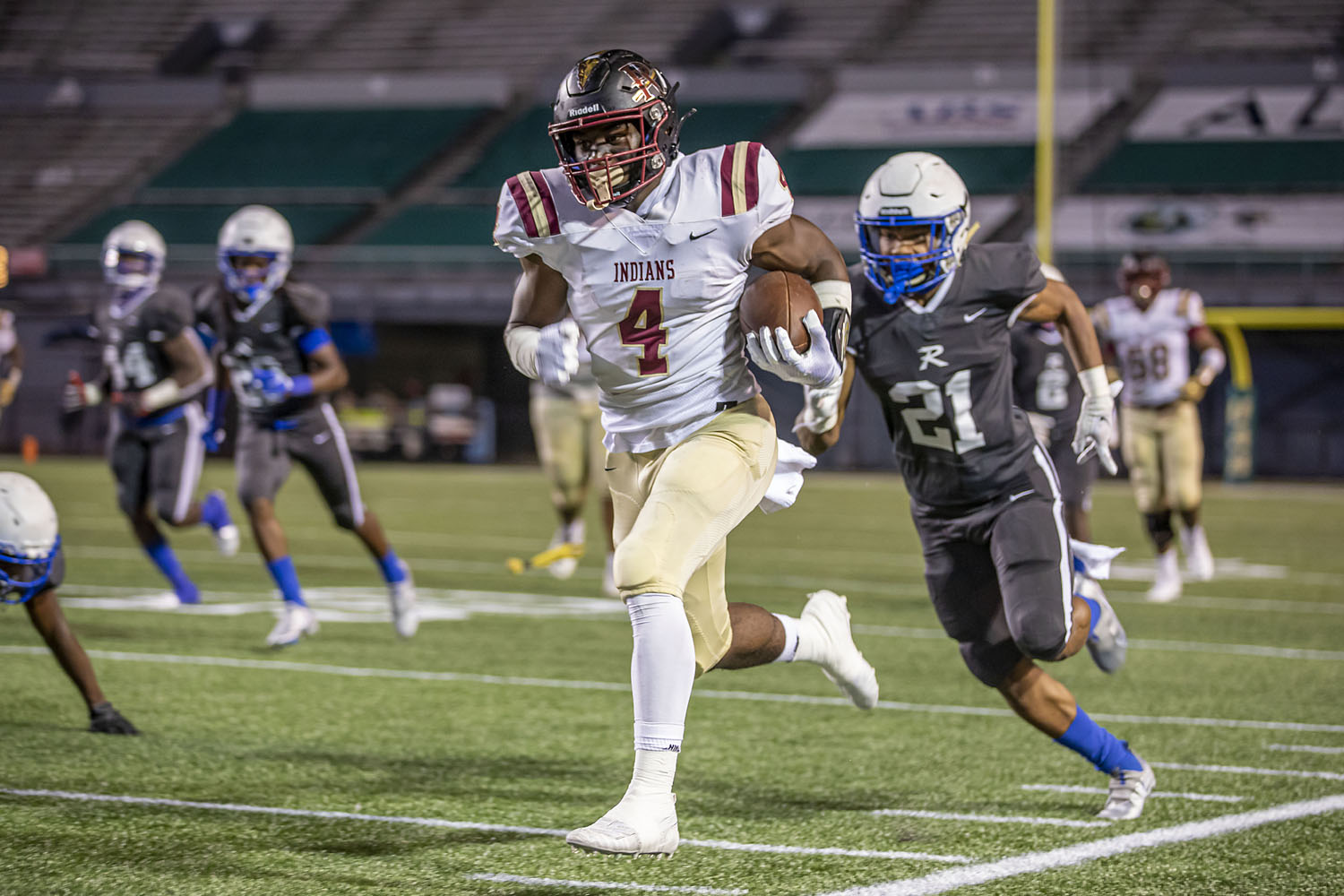 Pinson Valley running back Michael Sharpe Jr. (4) charges down the sideline at Legion Field on Sept. 25, 2020. Photo by Ron Burkett

Pinson Valley quarterback Zach Pyron commandeered a 79-yard touchdown drive when his team absolutely had to have it. He completed four passes, calmly marching the Indians down field for what looked like a game-tying drive in the closing minutes of an intra-class contest against 5A No. 3 Ramsay.

On a night that saw very little offensive firepower, Pyron dropped a dime into the back-left corner of the end zone, where Jaquel Fells Jr. gathered it for a 9-yard touchdown reception with 56 seconds remaining on the clock.

The point after would have tied the game at 14-all, but it missed wide right. Ramsay recovered the ensuing onside kick and ran out the remaining seconds to secure a 14-13 win over 6A No. 3 Pinson Valley.

The loss snaps a four-game winning streak for the Indians, dropping them to 4-2 on the year. The Rams improve to 4-0, looking like a serious contender for the 5A state crown.

Pinson Valley’s final drive started at its own 21-yard line, as the visiting Indians faced a 14-7 deficit with 3:05 remaining in the game. The crucial march covered 79 yards on nine plays, the last of which floated 9 yards through the cool Magic City night.

Pyron-to-Fells looked pretty, but it was helpless without the all-important point after.

The Indians struggled offensively for much of the night, totaling 240 yards on 51 plays against a Ramsay defense that has surrendered a total of 20 points in four games this season.

Ramsay forced five three-and-outs and secured an interception in 12 Pinson Valley drives. The visitor’s only other scoring drive came on their first possession of the game when senior running back Kenji Christian bounced off right tackle for a 20-yard touchdown gallop that evened things at 7-all.

For Ramsay, the game-winning touchdown went from quarterback Kamren Ivory to wideout Kameron Thomas with 4:17 remaining in the third quarter. The 19-yard connection converted a fourth down and broke a 7-7 deadlock that held for most of the night.

Ivory started fast, as he led a five-play touchdown drive on the opening possession of the game. He closed it with another fourth-down conversion, this time firing over the middle for a 15-yard score to Alonzo Johnson less than two minutes into the game.

Ivory finished 15 for 33 with 191 yards passing and two touchdowns.

For Pinson Valley, Pyron completed 13 of 27 passes for 170 yards and a score. He also finished with an interception. Christian ran the ball 11 times for 63 yards and the score. Micah Woods caught four passes for 57 yards to go with four grabs for 42 yards from Ga’Quincy McKinstry.