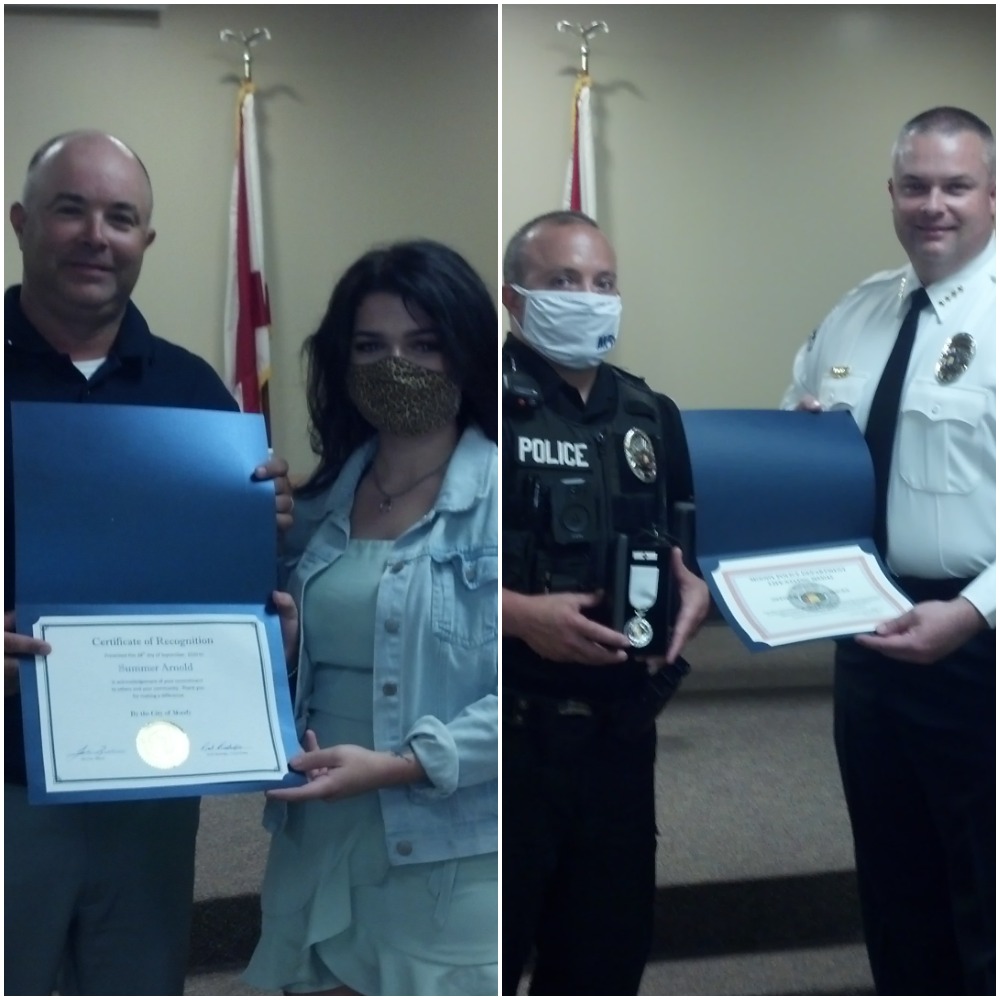 MOODY – A local student and a police officer were recognized by the Moody City Council for their services to the community at a meeting on Monday, Sept. 28.

Officer Trenton Wicks was presented with an award by Moody Police Chief Thomas Hunt, who explained that Wicks saved the life of an offender in August.

On Aug. 13 Wicks responded to a report of a burglary where he found the offender injured by broken glass after trying to enter a home to assault the victim. The offender had severed a vein on his left arm, causing severe bleeding. Wicks applied a tourniquet to him to stop the bleeding which saved his life. 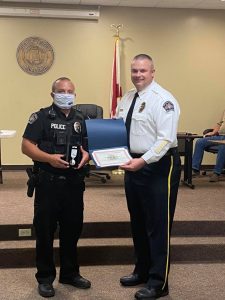 Wicks was presented with a lifesaving medal and certificate for his action on that date.

“We love our police officers, they do a great job,” said Mayor Joe Lee. “It’s like Chief Hunt said, it doesn’t matter who you are, they’re there to serve and protect.”

The council also recognized Moody High School student, Summer Arnold, 17, who was given an award for community service. The award was recommended by Councilman Nick Rutledge.

Rutledge recounted a night that he met with his daughter at a local fast food restaurant where a crowd had left trash in the lot.

“It was pretty bad,” he said. “And I witnessed this young lady out there – and I don’t know her – I witness this young lady picking up all this trash, which meant a lot to me living in the city and serving. And I think she deserved to be recognized.” 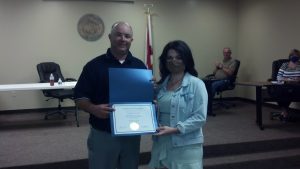 He then got her name and invited her to the meeting where she was presented with the award.

Later in the meeting, Councilman Lynn Taylor presented the 2020-2021 city budget. He said that the budget was $24,441,227. Additionally, he said that all operating budgets were being met and that the city was able to pay down debt by $1.4 million.

Capital budget requests were in the amount of $121,820 and included new fire hydrants, new equipment for Parks and Recreation, Public Works, as well as the police and fire departments. Capital projects were $840,00, which include paving roads, ramp work on I-20 Highway and Kelly Creek Rd.

Taylor reported that the city was able to meet the required difference in revenue versus expenses of $1,369,873.

Before the meeting ended, the council accepted the lowest bid from Aqua Marine Enterprises, Inc. to build two storm shelters. One will be located at Moody City Park and the other at Whites Chapel Community Center. Lee said that construction should be completed in six months.