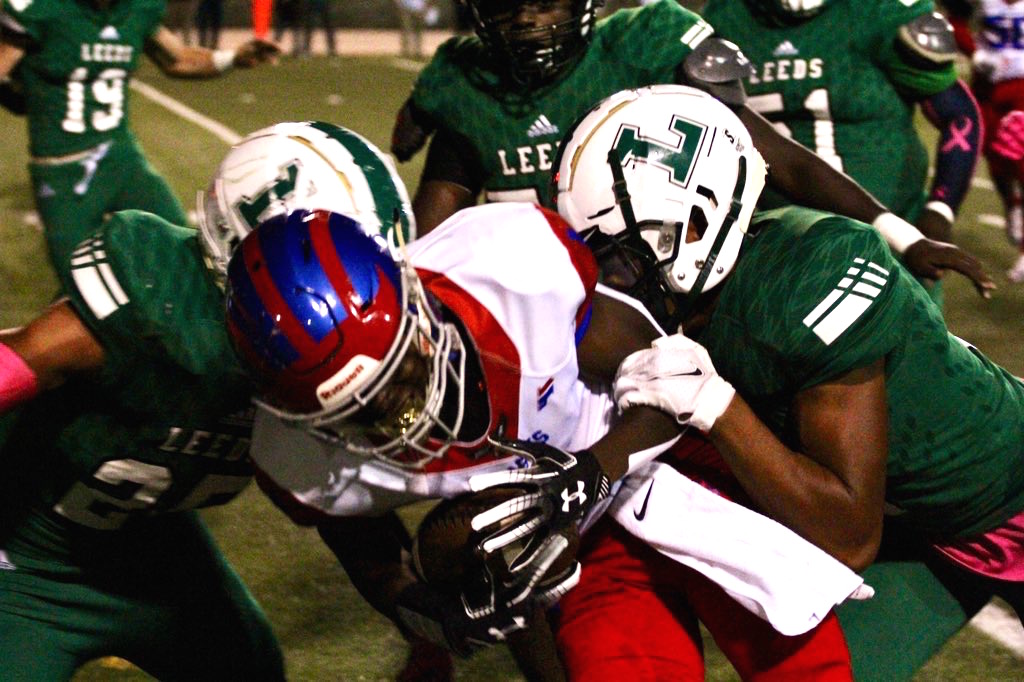 Leeds defenders secure a tackle during a home win over Center Point on Oct. 2, 2020. Photo by Joshua Huff

Leeds rallies from 14 down on Center Point

LEEDS — The Leeds High School football team weathered an early Center Point lead on Friday to rally in the second half to defeat the Eagles, 17-14, in what was a return to Class 5A, Region 6 play for both teams. The victory for the Green Wave stretched their winning streak to six games and solidified their spot within the top ranks in the region along with undefeated Alexandria.

Faced a deficit all throughout the evening, the Greenwave ultimately turned the tide and took their first lead of the night with less than five minutes remaining in the game thanks to a tipped pass on fourth and six from the 37-yard line. The pass, thrown by quarterback Jarod Latta, hit the hands of a Center Point defender and bounced into the waiting arms of Rametrius Yelverton, who scampered in to give the Greenwave their first lead of the game.

“We got lucky there to catch the tipped ball,” Leeds head coach Jerry Hood said. “But you know what? I’ve been on the other side of that. Where someone caught one on me. So, I’m going to take it.”

The touchdown capped off a three-quarter rally for Leeds, which witnessed Center Point jump out to a 14-0 lead at the end of the first quarter behind a potent offensive attack led by Troy Bruce. The sophomore scored on a 15-yard touchdown run midway through the first and scampered 83-yards to set up a 10-yard D’Ontae Eatmon touchdown run to end the first quarter.

Seemingly in control, Center Point strutted into the second quarter with thoughts of running up the score and notching its third consecutive win. Yet Leeds’ defense, which entered the night allowing just 16.5 points per game, was having none of it. The unit stifled Center Point from then on out, allowing the Greenwave some breathing room despite their offense still looking for answers.

“George (Bates) had his team ready to go.” Hood said. “They outplayed us in the first half. I thought our defense settled down in the second quarter, got some stops and gave them some confidence.”

Though the first half was less than ideal for Leeds, the Greenwave did manage to threaten in the waning moments of the second quarter, but a holding penalty pushed the offense back from Center Point’s 1-yard line to the 11-yard line. That forced a field goal, which was promptly blocked.

Leeds finally got on the scoreboard midway through the third quarter behind a 10-yard scoring run from Yelverton. The Greenwave then further narrowed the lead with 9:42 left in the game to 14-10 following a 30-yard field goal.

Center Point, which had gone dormant since the start of the second quarter, was then tasked with solving a determined Leeds defense. That proved to be a formidable task that went unsolved. The Eagles turned the ball over on downs, which allowed Leeds to set up its game-winning touchdown.

The Eagles had one final chance to take the lead on their ensuing possession, but they turned the ball over on downs yet again.

“The chemistry of this team in incredible,” Hood said of his club. “They never die. The coaches stay calm at halftime. We saw some things that were there. We just were not getting the job done. But give Center Point credit. George (Bates) has a great team. I admire so much the way that they carry themselves. They play hard. What great kids. That is good high school football.”