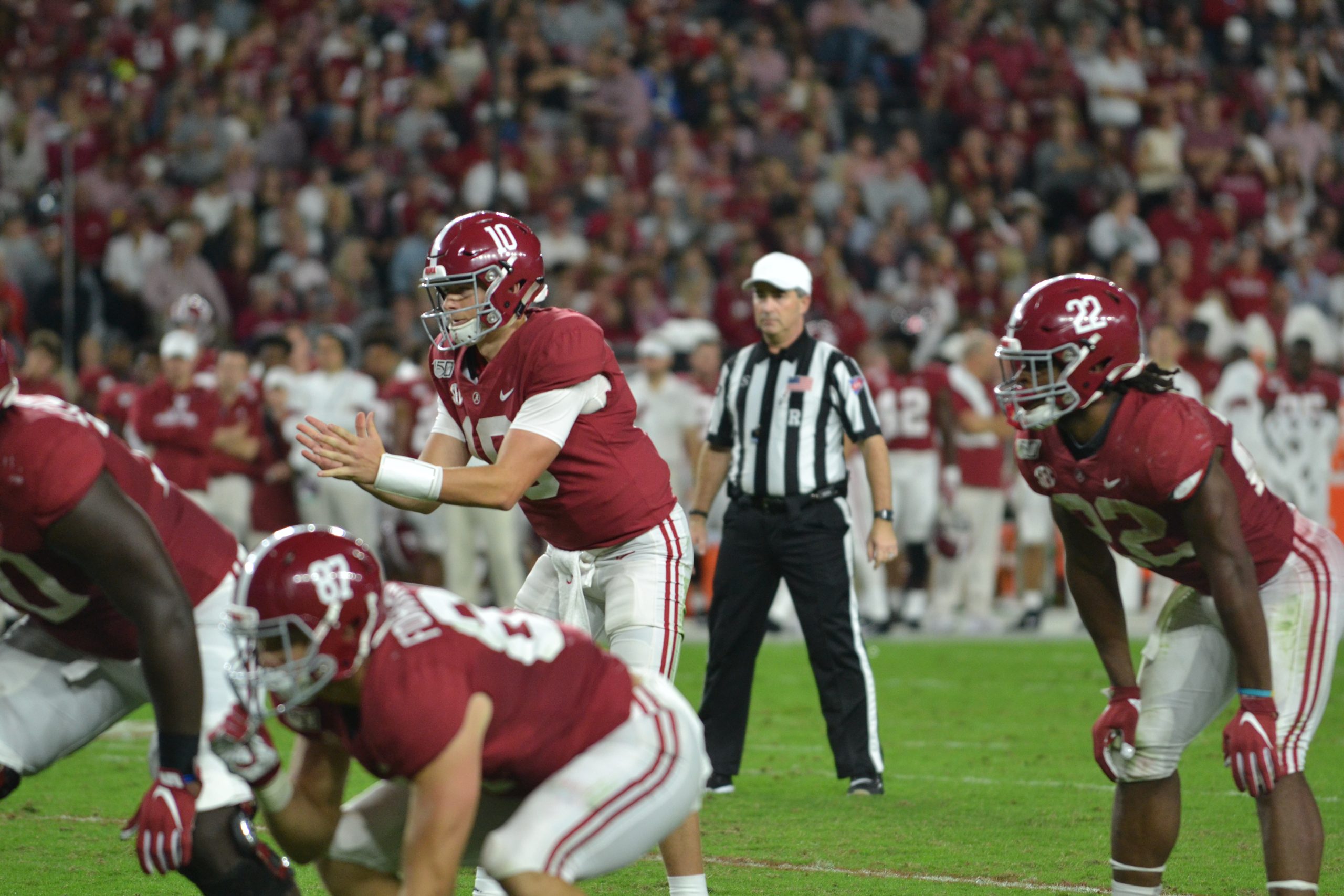 Alabama quarterback Mac Jones (10) readies for the snap during a home game against Arkansas on Oct. 26, 2019. Photo by Erik Harris

TUSCALOOSA, Ala. (AP) — Mac Jones passed for a career-high 435 yards and four touchdowns, including a pair of deep throws to John Metchie III and an even longer one to Jaylen Waddle, and No. 2 Alabama romped past No. 13 Texas A&M 52-24 on Saturday.

Briefly threatened early, Jones and the Crimson Tide (2-0) flexed their considerable big-play muscle in the passing game to put away the Aggies (1-1). A sign of things to come: His first attempt went 78 yards to Metchie, ‘Bama’s latest major receiving threat.

“Our guys stayed the course and kept competing in the game,” Alabama coach Nick Saban said. “That’s really what we wanted to do.”

Jones topped that initial score with an 87-yard TD to Waddle, who had sprinted past two Aggies defenders to make the grab with nothing but green in between himself and the end zone. Metchie and Jones hooked up for a 63-yarder in the fourth, giving the sophomore five catches for 181 yards.

“He got to showcase that today,” he said.

Jones finished 19-of-26 passing for a second straight surgically precise performance marred by one interception off a deflection.

“We won, so it’s a good game,” Jones said, when asked if it was his best performance.

Waddle had 142 yards receiving and his touchdown catch was tied for the fifth longest in program history.

It came after three Alabama penalties in four plays. Jones’ three career pass touchdowns of 85-plus yards are the most by a Tide quarterback.

Mond put up big numbers but it wasn’t nearly enough. He completed 25 of 44 passes for 318 yards with three touchdowns — and the pick six. Ainias Smith had six catches for 123 yards and two touchdowns.

“We’ve got to stop the big plays, learn to be more efficient on offense and take advantage of some more of those opportunities to be able to play and compete,” Aggies coach Jimbo Fisher said. “We had some opportunities. I’m disappointed we didn’t do it, but there’s still a lot to work with, some of our young guys.”

But Alabama was off to the races after the Aggies scored two quick first-half touchdowns to tie the game.

“I think guys were shocked that we were right there with them,” linebacker Buddy Johnson said. “And there’s no reason to feel that way. It’s important that the leaders keep everyone in the moment, stay in the moment and don’t get carried away.”

Texas A&M: The offense couldn’t get Isaiah Spiller and the running game going after getting undone by turnovers in a 17-12 win over Vanderbilt. Smith, a converted receiver, emerged as another needed threat in the passing game.

Alabama: Any questions about production of the Tide’s passing game after Tua Tagovailoa, Jerry Jeudy and Henry Ruggs III have been answered. The defense is still not dominating all four quarters.

Wright had the huge defensive play and one that drew the ire of Saban. He tried to push Smith out of bounds on the 47-yard touchdown play but failed.

“I just didn’t like the way he approached and finished,” Saban said. “He should have gotten the guy out of bounds and he didn’t.”