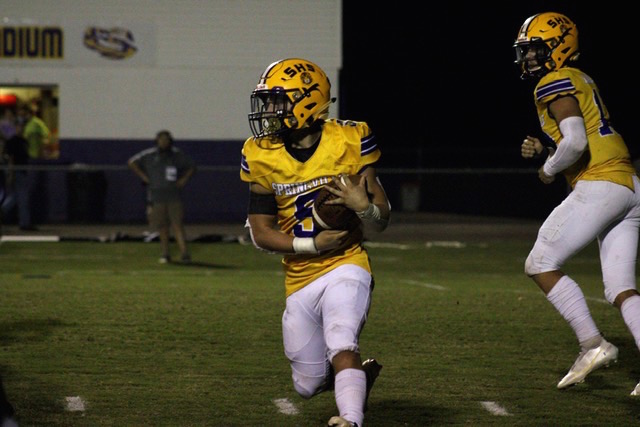 Springville junior Daniel Smith carries the ball during a home game against Scottsboro on Sept. 18, 2020. Photo by Ronnie Hagood

SPRINGVILLE — With the playoffs in reach for the first time since 2009, the Springville Tigers played host to the Pell City Panthers on Friday night. When the clock hit 0:00 at Tiger Stadium, the home standing Tigers found themselves on the wrong end of a 34-20 score and now needing help to end their 10-year playoff drought.

The Tigers started the scoring on Friday night with a four-plus minute drive on the opening possession capped off by a Pearson Baldwin 3-yard touchdown run.

The start of the second quarter saw Pell City tie the game up a 7-7 on a 4-yard touchdown run. Springville took the lead back midway through the second quarter when Baldwin ran the ball around the end for 3 yards and a 14-7 Tigers lead. Just before halftime, the Panthers would tie the game up. Baylor Smith hit Bryson Clough in the back of the end zone to make it a 14-14 game at halftime.

During the break, the rain that forced so many games to move up to Thursday evening found its way to Springville. Unfortunately for the fans in purple and gold, the rain seemed to bog down the Tigers offense. Pell City took the lead on the opening possession of the second half and never looked back.

David Keith gave the Panthers the lead on a 33-yard touchdown run. In the fourth quarter, Keith added another touchdown run of 5 yards extending the Pell City lead to 28-14.

Springville found a little offensive momentum midway into the fourth quarter when Baldwin found a leaping Ben Bianchi in the end zone for a 9-yard touchdown pass. The Tigers opted to go for the 2-point conversion after a Pell City penalty, but were unsuccessful.

With the clock running down, the Panthers pulled out of reach with a 43-yard Smith to Kentrell Borden touchdown pass, ending any chance for a Tigers comeback. For the night, the Panthers quarterback was 12-15 for 143 yards and two touchdowns.

After the game, Springville head coach Michael Graben placed a lot of the blame on himself.

“The head coach didn’t handle adversity well, and I’ll do a better job of that,” he said.

“We tried to do some different things,” he continued. “When its raining like this and you’re trying to get three and four yards a play, if you don’t get four yards a play, now you’re facing second and eight and so. We tried to throw the ball some, it’s my fault, I should have called better plays.”

The game seemed to miss the home field advantage Springville players are accustomed to.

Next up for the Tigers is a road trip to Lamar Field in Oxford for a region game against the reigning 6A state champions. Oxford is riding a six-game winning streak. This will be the first time Springville and Oxford have played since a 19-0 Oxford win in 1934.