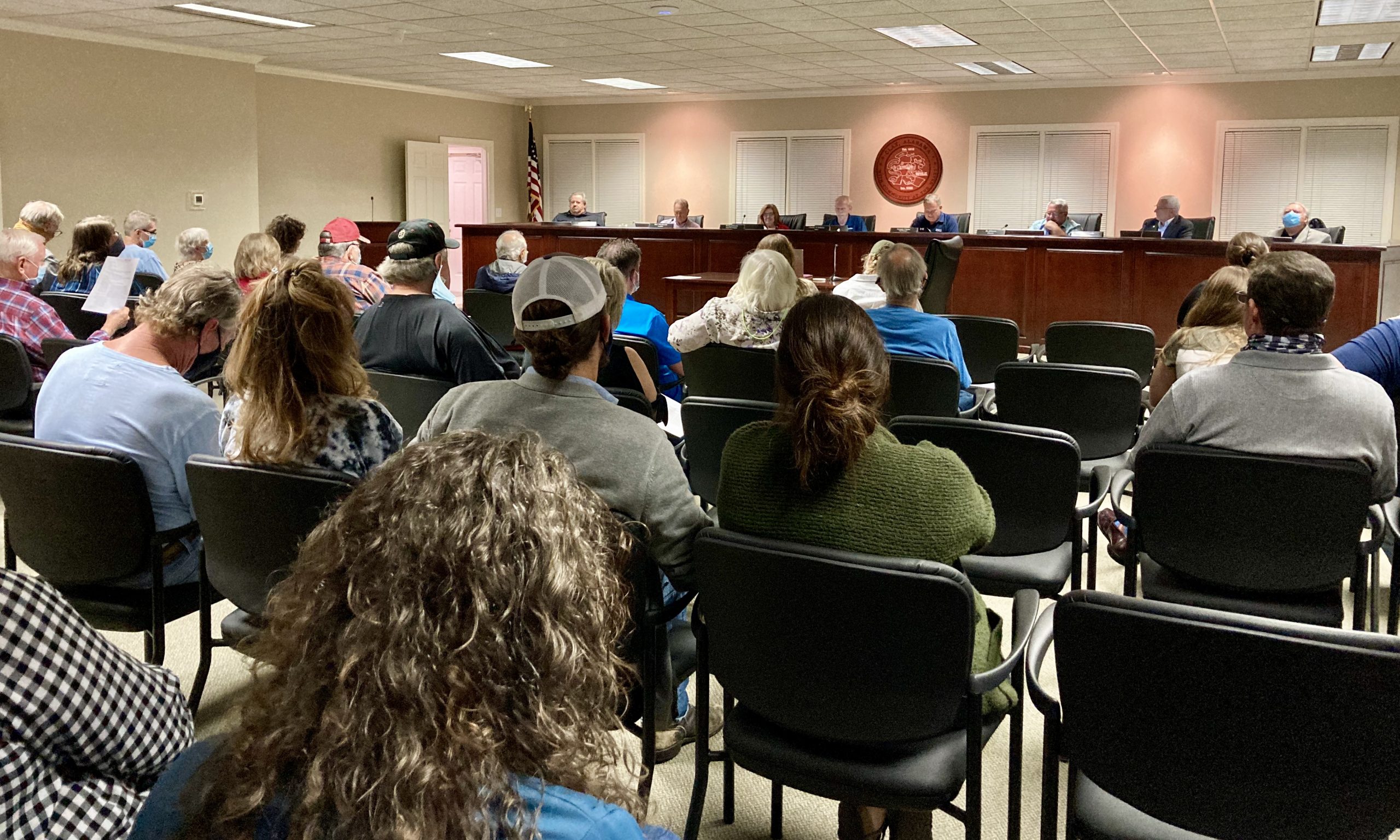 Annexation agreement between city of Clay, Walker Family Holdings Ltd., fails due to ‘no motion’

CLAY – Many citizens were in attendance at Tuesday night’s Clay City Council meeting to address concerns over property that is being considered for I-3 Mining and Manufacturing Zoning.

According to Resolution 2020-33, Walker Family Holdings Ltd., “has expressed a desire to annex some of all of the … listed properties into the City of Clay contingent upon the annexed properties being zoned I-3 Mining and Manufacturing District.

The Planning & Zoning Commission will be holding a public hearing concerning the annexation and rezoning of these properties Thursday, Oct. 15, 2020, at Clay City Hall, at 6 p.m. Resolution 2020-33 was an agreement between the city and Walker Family Holdings that if the properties failed to be approved for rezoning, they would automatically be de-annexed from the city of Clay.

“What the annexation agreement says is … the city and Walker agree to the terms and provisions set in this document that takes those addresses, if they are voted to be annexed into the city of Clay, but denied I-3 zoning, those parcels are automatically de-annexed from the city of Clay, as well as the parcels that everyone knows are at the end of Self Road – that is the barn and the horse training facility,” City Manager Ronnie Dixon said. “That parcel would be subdivided so that part of it would remain – the horse barn – agricultural, and the other part would be in to the I-3 zoning, if approved. If it’s not approved, then the entire listed addresses and tax IDs would be de-annexed and remain as they are today, a part of Jefferson County; no municipality.”

When Mayor Charles Webster called for a motion regarding the approval of the resolution, the request was met with silence and the resolution failed to pass due to no motion being offered.

During the pre-council meeting, Webster addressed rumors and accusations being made about the mayor and council on social media regarding the Walker Family Holdings property.

“I’ve lived in Clay all my life and I am going to look out for the best interest of Clay,” Webster said. “There’s some people on Facebook that are making comments about me – people that I know, that I thought were friends of mine – that I don’t appreciate.”

Webster said that he does not respond to comments on Facebook, but that citizens are more than welcome to talk to him in person, over the phone, or over email.

“I am a person of integrity and I will not lie to you, and I will not mislead you,” he said. “I don’t think anyone on this council would do anything like that, either. I’ve seen comments that this was an undermining deal. I tell you what, I knew about this thing just a little bit before you did. It sort of caught me by surprise. There’s going to be a public hearing Thursday night about it and if you want to come and speak at that public hearing about it, that’s fine. … That’s why the public hearing is set up, for y’all to come and speak your mind. And I want you to do that.”

During the public comments portion of the regular meeting, citizen Emily Stauss spoke to the mayor and council on behalf of the Facebook comments.

“I wanted to apologize to all of you who may have gotten negative comments on social media due to us who are trying to organize and spread the word about this,” Stauss said. “Our goal was to let the community know that it was happening, and we didn’t have a problem with any of you, personally. So, I’m very sorry that people are attacking you personally; I wish there was something I could do to stop it, but there’s not. For those of you who are here about the quarry, please don’t attack our council members and our mayor. They’re not the ones who this was their idea in the first place. It’s just coming to them.”

Several citizens were also in attendance to speak to the council during public comments regarding the new St. James subdivision behind Clayton Cove.

Lynn Hillman listed three concerns: first, that approximately 25 houses that were supposed to be all brick have been built with only one side brick, and three sides siding; second, that investors are purchasing the homes with the intention to rent; and third, citizens are concerned that the houses might be approved for Section 8 housing.

“I am greatly concerned,” Hillman said.

Webster said that the situation was currently in litigation, and City Attorney Alan Summers said that he had not heard any mention of Section 8 housing.  Additionally, the mayor and council informed the public that federal housing law protects a property owner’s right to rent their property.

As for the specifications of the housing construction, Dixon said that there was an agreement between the attorneys that “the pads that were already poured without a brick ledge, the agreement is that they could continue as they were drawn and submitted. The remainder will be four-sided brick with the larger pads that will have the brick ledge. That’s my understanding.”

Dixon explained that there were three parties involved: the developer, Allen Jones; the initial builder, Southern Energy; and a new builder, Prominence Homes.

“When the developer brought the builder that was going to build the houses, they showed plans to the Planning & Zoning Commission and to the council,” Dixon said. “Between that builder that was introduced to the council and the first building permit that was granted, the builder changed. … So when it got to the point of lawsuits, the current building permit holder, that builder, their stance is that the developer never told them that there had to be four-sided brick.”

Councilor Bo Johnson said that he is not at ease with the agreement made between the attorneys.

“I don’t really care if the builder thinks he’s been done wrong,” Johnson said. “We approved four-sided brick, Planning & Zoning recommended, we approved it, and I don’t think we should stop with a negotiation (that) you just need to build the rest of them (according to specifications). We need to continue and pursue this, and I don’t know what that looks like or what we can do, but that bothers me very much … It bothers me for my integrity, because we said this is what it’s going to be. We need to continue to fight this fight. We don’t need to push this to the side. We need to do everything that we can do to make sure that all sides of those houses get bricked.”

Johnson’s comments were met with enthusiastic applause from those in attendance.

During mayor and council comments, Councilor Dennis Locke offered a motion for the city to adopt its 2020-2021 budget, as it was discussed at the previous council meeting. The motion passed unanimously.

Councilor Bo Johnson addressed a few city updates, including progress being made at the up-and-coming Little Caesars on Old Springville Road and efforts to connect the company leasing the former Hardees building with a potential restaurant owner.

Johnson also reminded the public that on Thursdays at noon, Refuge Church offers a community-wide food distribution. Citizens can come by and pick up 30-pound boxes of food that include not only produce, but meat, milk, cheese, sour cream and more.

“I appreciate the churches that have partnered with us,” he said. “I appreciate, especially, individuals who have taken it upon themselves to make sure that they pick up extra to take to their neighbors who can’t get there.”

The city of Clay will be holding a Trunk-or-Treat at Clay-Chalkville High School on Oct. 31, 2020, from 5-7 p.m., in lieu of its annual fall festival.